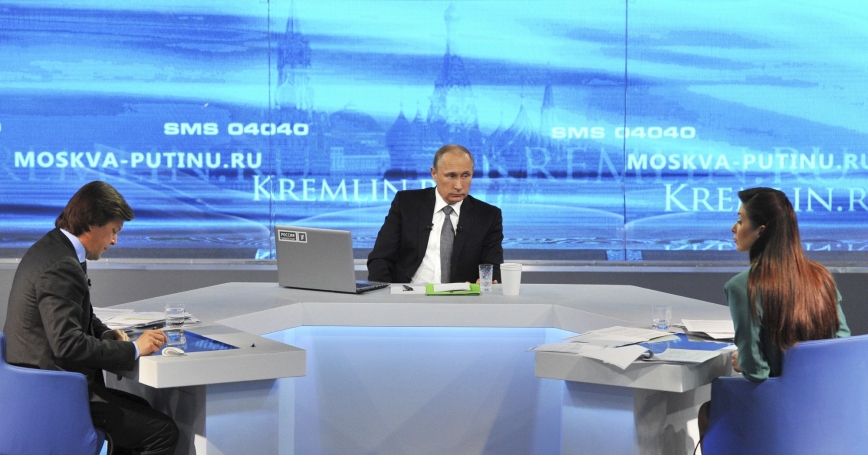 Russian President Vladimir Putin takes part in a live broadcast nationwide call-in in Moscow 4/16/15; he said Russian military forces were not in Ukraine, denying allegations that Moscow is providing troops and support for pro-Russian rebels fighting in eastern Ukraine

The Ukraine crisis is accelerating shifts in power. Russia is a net geopolitical loser; Europe is emerging stronger; NATO is starting to boost defenses; and China sees new openings. These changes are reshaping the international landscape.

Russia's invasion of Georgia in 2008 shocked the West, but its reaction was muted. Russian peacekeepers already patrolled the separatist areas of Abkhazia and South Ossetia. Although evidence of Russia's preparations for war was evident months before, Georgia contributed to the initiation of the conflict.

Ukraine is different. Russia's seizure of Crimea and parts of the Donetsk and Luhansk regions has stirred outrage in the West. Moscow falsified unrest in Ukraine to justify an unprovoked assault, violating solemn international obligations. The Kremlin seeks to carve a coercive sphere of influence by destabilizing neighbors.

Russia is overplaying its hand, however, and losing ground on multiple fronts. Hobbled by corruption and high dependence on hydrocarbon exports, the economy suffers also from growing state interference, a steep oil and soon to be gas price drop, and Western sanctions. Yet, Europe is strengthening its relations with Russia's western neighbors, NATO is being revitalized, and its defense budgets will grow. Russia's nuclear saber-rattling is angering Europeans, not scaring them.

Meanwhile, Beijing is more welcome in anxious Central Asia. China is making huge infrastructure investments and pulling gas eastward via pipelines that redraw geopolitical boundaries. If a nuclear deal is sealed with Iran and economic sanctions eased, its energy exports will grow and compete on the world market against those from Russia and other producers.

Russia can take steps to recover from self-inflicted wounds but is not yet doing so. A full withdrawal from eastern Ukraine would end many crippling Western sanctions. The cessation of intimidating military maneuvers and the use of gas as a political weapon would improve ties with Europe. Allowing the new Eurasian Economic Union (Armenia, Belarus, Kazakhstan, Russia and soon Kyrgyzstan) to become a depoliticized, rules-based entity would bring economic benefit and boost land-based trade between China, Europe and the Middle East. Slashing state economic interference and corruption would boost Russian entrepreneurship and productivity.

Rather than seizing these opportunities, the current policies of Russia jeopardize its substantial interests in Europe. The European Union is Russia's largest trading partner and accounts for three-quarters of Russia's inward foreign direct investment stocks. EU competition policy is stopping Russia from building a gas pipeline via the Black Sea that could box in customers. An EU energy union would further reduce risks of undue reliance on Russian energy.

With the emergence of the Ukraine crisis, Germany for the first time is leading the West — not just Europe — in dealing with Moscow on a major security issue. The Minsk II accord reached in February is replete with ambiguities, suggesting that Berlin and Paris lack the necessary clout to manage prime-time security issues on their own. On the eve of the Minsk II talks German Chancellor Angela Merkel weakened her bargaining leverage by averring that progress in Ukraine could not be “achieved by more weapons.”Without meaningful Western military aid, Ukrainian President Petro Poroshenko acceded to unreasonable demands from Russian President Vladimir Putin. Partly as a result, Ukraine's eastern front remains vulnerable.

On April 15 German Finance Minister Wolfgang Schaeuble beseeched America to do more to help Europe address the Ukraine crisis: “We know that we need the United States.” One way to do this is to fix the Normandy format used in the Minsk ceasefire talks (France, Germany, Russia, Ukraine). This format puts too much burden on Germany and France; it should be augmented with U.S., EU and perhaps Polish and U.K. participation.

Aggression in Ukraine has given NATO new relevance. It has launched a constant rotation of air, maritime and ground presence on the alliance's eastern border. America is strengthening ground force presence in Poland and the Baltics. A number of European countries are increasing their defense spending and efficiency while focusing more on territorial defense. But recent calls for a European army ring hollow. Too many Europeans still think any crisis can be solved by diplomacy alone; history suggests that negotiating is more effective when backed by the willingness to use force if necessary. France understands this, but the U.K. ought to recover its will to fully engage and not act as if it is halfway out of Europe.

Many Europeans, especially in Central and East Europe, see the United States as a security guarantor, despite some popular anti-Americanism. U.S. reconnaissance and intelligence are essential to monitoring the Minsk II ceasefire. If Russia were sharply to expand aggression — heightened violence this week in eastern Ukraine is worrying — America and several European allies would likely rush military aid to Ukraine with the aim of improving defenses and raising the costs of aggression. Additionally, sanctions would be expanded. Regardless, Ukraine urgently needs more aid for governance and security sector reform.

Russia's aggression abroad and repression at home have altered the basic assumptions of earlier Western policy. By misjudging the tolerance for aggression in Europe, Moscow is bringing on the encirclement it fears. The West is now better prepared to deal with any further aggression and more confident that Ukraine's future will be as part of an enlarged Europe.

Ian Bond (@CER_IanBond), director of foreign policy at the Centre for European Reform in London, was British Ambassador to Latvia.

Richard Kauzlarich (@richkauz), director of the Center for Energy Science and Policy at George Mason University, was U.S. ambassador to Azerbaijan and Bosnia and Herzegovina.

This commentary originally appeared on U.S. News & World Report on April 17, 2015. Commentary gives RAND researchers a platform to convey insights based on their professional expertise and often on their peer-reviewed research and analysis.