What Does It Take to Rescue Migrants at Sea? 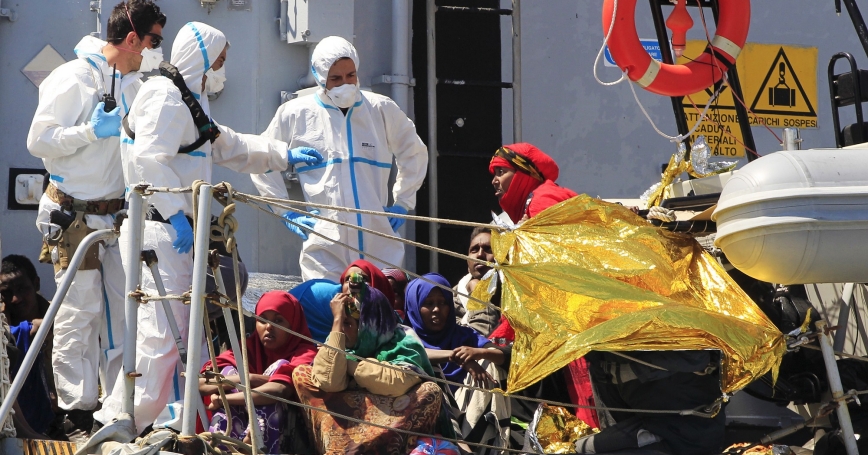 Migrants stand on board of Italian Navy ship Chimera before disembarking in the southern harbour of Salerno April 22, 2015

European Union leaders gathered today for an emergency summit to discuss a concerted response to the humanitarian disaster unfolding in the Mediterranean Sea. As a former officer serving aboard an Italian Navy warship deployed in Operation Mare Nostrum in November 2013, I am well aware of the challenges.

This Italian search-and-rescue mission responded to human trafficking incidents across the Mediterranean from North Africa toward Europe’s southernmost coastline starting in October 2013 and running for 12 months before it was replaced by Triton, a smaller, EU-run operation. Mare Nostrum rescued 156,362 migrants and arrested 366 suspected traffickers over the course of 439 incidents.

Since the start of 2015, the International Organization for Migration reports that more than 1,750 migrants have perished in the Mediterranean—more than 30 times higher than during the same period of 2014. Eight hundred of those lives were lost on Sunday 19th April off the Libyan coast in the deadliest single event recorded in the Mediterranean in the 21st century.

When my ship, an Anti-submarine warfare Frigate, was deployed in 2013, the Italian Navy had already been patrolling the Strait of Sicily for decades, surveilling fishing activities and rescuing immigrants with its Corvettes and Patrol Vessels stationed at the base of Augusta, Sicily. But in the two years following the Libyan crisis, the immigrant numbers have ramped up. Libya had become fertile territory for human traffickers taking advantage of the increasing flow of people fleeing from conflict zones, especially from Syria.

Emergency calls were always worst at night, and especially during stormy weather, very typical of the late autumn and winter months. The Captain would order “All hands on deck” and movement would be fast. But radar would not always help: in stormy weather, contact could come and go, so we could not always confirm a sighting was real. Infrared cameras, which use heat to generate an image, could scan for signs of life even if a vessel’s engine was quiet.

In these situations, the guys on the bridge had a hard job. We couldn’t lose eye contact with the boat, but we also couldn’t get too close: with the sea so rough, the waves could smash small boats against our hull, possibly capsizing them. Their only chance of survival would be to stay calm, stay still and let us do our job.

Rescue operations could take as long as 48 hours. You can’t rush in these situations, especially in adverse weather conditions. Every passenger would have to be transferred, medically inspected, provided with something dry to wear, fed and identified before we could head back and hand them over to the Italian authorities. Sometimes the traffickers themselves sought to get away by posing as immigrants, but often the rest of the group would tell us who they really were, and we would arrest them.

Even after a successful rescue, the crew would feel exhausted but also incredibly proud of what we had accomplished. But we also realised we were not fixing the problem. We knew that we were just using a sticking plaster—a mere bandage—to stop a hemorrhage, and that a solution must be found to stop that hemorrhage at its source.

Giacomo Persi Paoli is an analyst with RAND Europe in Brussels.