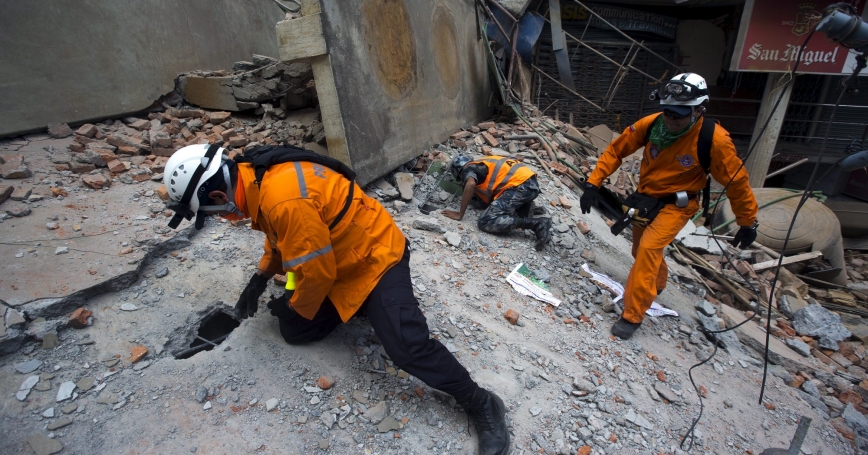 Nepalese military personnel and international rescue crews check on a collapsed building after the earthquake in Kathmandu, Nepal, May 12, 2015

by Mahshid Abir and Melinda Moore

Nepal endured a second devastating earthquake Tuesday, adding to a death toll estimated at more than 8,000 and swelling the number of injured and displaced. But more than two weeks after the first quake hit, international relief efforts continue to be frustrated by a series of challenges that could have been foreseen and addressed in advance.

Many questions arise in the aftermath of such calamities: How can disaster relief be initiated quickly and be effective? Which personnel and what expertise are needed? What supplies and equipment? What services? Even experienced disaster relief agencies can benefit from reflection on past disasters to shed light on these questions and inform their current response.

Unfortunately, lessons from the failures of relief efforts after the 2010 Haiti earthquake and Hurricane Katrina in 2005 were largely ignored. This new quake only magnifies the significance of Nepal's failure to learn from past disasters.

The 2010 earthquake in Haiti accounted for about three-fourths of the 304,472 disaster-related deaths worldwide that year. Experiences from that earthquake may have provided early warnings about problems that have arisen as relief efforts have unfolded in Nepal. For example, damage to Haiti's main shipping port and airport significantly delayed the arrival of international aid. Alternatives to these sites were available but were underutilized. International teams and the local government did not sufficiently plan for the arrival of aid through these other sites. The airport could not handle the surge (PDF) in incoming personnel and supplies. With impassable transportation routes, cargo weight restrictions and minimal refrigeration capability, aid groups had to limit food quantities and types that were brought into the country. Similar logistic challenges have confronted Nepal relief workers.

Trauma care for the orthopedic and crush injuries experienced in Haiti was also hampered. Surgeons were in high demand, but lack of resources for extensive and complex limb salvaging treatment led to potentially unnecessary amputations. Capacity to provide appropriate post-operative and follow up care to such patients was also limited, resulting in wound infections and other complications that potentially could have been avoided. Meeting the psychological needs of the earthquake survivors was challenging with cultural and language differences limiting the effectiveness of international mental health experts. Health responders in Nepal are encountering similar problems.

Lessons also can be derived from past successes. For example, a study conducted in the aftermath of the 2005 U.S. response to Hurricane Katrina found that effective coordination is critical, but there are different ways to achieve it. Nepalese authorities and their international relief partners can take advantage of these essential lessons, including establishing an effective coordinating body with experienced professional leadership and an active information exchange. Community participation is also critical at all phases, from immediate disaster response through the transition to disaster recovery. For example, after the 2003 earthquake in Bam, Iran, local community leaders and personnel from other provinces in the country played pivotal roles in facilitating the efforts of external relief agencies in affected communities. Active health surveillance and health-needs assessments were carried out based on tent-to-tent visits; the information gleaned was used to guide health programming for over 100,000 persons affected and displaced by the earthquake.

The government of Nepal and the international responders can still draw from these past experiences, both negative and positive, as they respond to the country's most devastating natural disaster in decades, the April 25 earthquake, and the more recent ones of almost equal magnitude. The influx of multiple responders, including foreign governments, non-governmental organizations, faith based groups and random small groups or even individuals, must be well coordinated so they do not themselves overwhelm. A systematic approach includes the assessment of infrastructure and population needs and the targeted deployment of personnel and equipment and the provision of services, including health care. This helps ensure that relief efforts are as efficient and effective as they can be.

Natural disasters such as the Nepal earthquake cannot be prevented, but their effects can be mitigated through well-informed disaster management. Leadership, coordination, communication and involvement of local stakeholders are critical in order to mount an informed response. Improved disaster management in Nepal could help limit the suffering of impacted communities and help secure a more successful recovery in the long run.

This commentary originally appeared on U.S. News & World Report on May 13, 2015. Commentary gives RAND researchers a platform to convey insights based on their professional expertise and often on their peer-reviewed research and analysis.