Book Review: 'God Is Not Here' by Bill Russell Edmonds 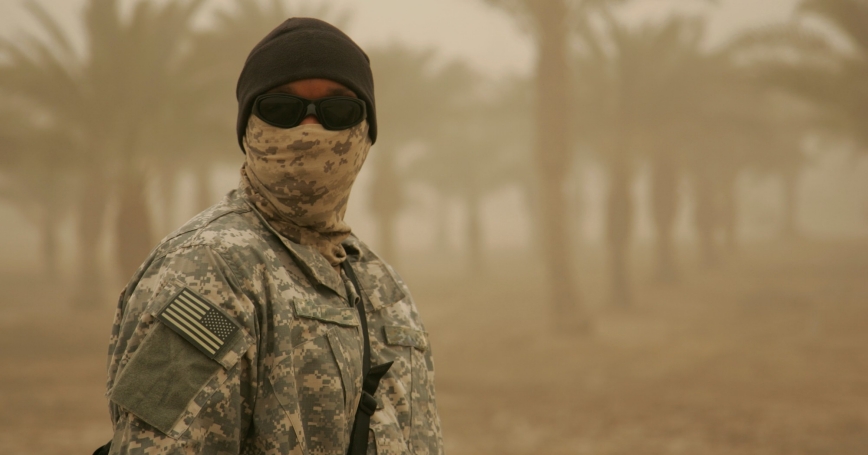 A masked American soldier in a sandstorm in Baghdad, Iraq

This is a soldier's sad and troubling account of his yearlong tour in Iraq (2005-6) and his subsequent struggle to regain his balance and find meaning in the experience. In May of 2005, Lt. Col. Bill Russell Edmonds, then a Special Forces captain, volunteered for duty in an ad hoc organization, the Iraqi Assistance Group, which the United States military created to supply advisers to the nascent Iraqi military. He was sent to Iraq, given a brief training course in Baghdad and then loaded into a convoy to Mosul, where he would spend the next year on a small compound Saddam Hussein had called the Guest House.

Edmonds's job was to advise an Iraqi intelligence officer in the interrogation and tracking of insurgents. The Iraqi, formerly a member of the Kurdish peshmerga's intelligence service, Asayesh, turns out to be a very skilled intelligence officer who, by Edmonds's own account, teaches him far more than vice versa. We never learn his identity: Edmonds calls him “Saedi,” Arabic for “sir,” throughout “God Is Not Here.” “Saedi hated the men who terrorized the Iraqi people, and he was devoted to punishing the killers and protecting the innocent,” Edmonds writes. “I came to understand and admire this about him.”

Although the book's portrayal of Saedi is largely sympathetic, the overall environment in which Edmonds was working is far from congenial. At the time, Iraq's post-invasion insurgency was ballooning into a civil war that pitted Sunnis against Shiites and Kurds. Aside from the occasional patrol, Edmonds's life is confined to the small Guest House grounds and its creepy interrogation center, which is very much like a dungeon. One can hardly imagine a more trying assignment, and there is no indication that Edmonds had been prepared for it. He studies Arabic and learns many customs, but the brutality of the war, the dangerous and delicate business of interrogation and the legacy of a ruthless dictatorship surround him daily.

Into the narrative of his Iraq experience, Edmonds splices the tale of his later mental collapse. It's a device obviously intended to build suspense as his breakdown approaches, but it's somewhat distracting and, worse, it tends to undermine trust in the narrator, particularly when the chapters depict an individual losing the ability to function.

What's more, because “God Is Not Here” recounts one isolated soldier's tour in Iraq — and his own interior hell — it is almost entirely devoid of the factual details that would allow us to evaluate its veracity. As Edmonds explains in the introduction, his account is based on words drawn from two private journals, one written in Iraq and the other in Germany in 2011, when he suffered his breakdown. Still more troubling, Edmonds says that some “experiences and characters are composites.”

All that said, Edmonds's time in Iraq did give him an opportunity to capture an essential lesson about the war: Americans' behavior toward ordinary Iraqis contributed actively to frictions, discontent, anger and ultimately a population that was less inclined to assist the United States-backed government than to aid the insurgency — or at least stay silent. As the violence grew, American soldiers became more aggressive, which, coupled with the protective measures they took and their general ignorance of Iraqi culture, created a highly dysfunctional atmosphere. Edmonds's book is full of Iraqi voices expressing outrage at the Americans. As an adviser, he had to deal with almost daily invective. He concludes: “Our actions, our tactics and our one-on-one American and Iraqi interactions are causing a few civilians to turn insurgent and the majority to look away when the few insurgents act.”

Edmonds never names any of his superiors, nor indeed any American officers or officials, but his account indicates that advisers like him were poorly led and utterly without the cohesion that sustains troops in war zones. Ad hoc units like the Iraqi Assistance Group are not standard in the military for a very good reason. Edmonds might not have suffered as much had he been in a formal unit with a competent leader. When not with Saedi, he tells us, he spent most of his time not with comrades but alone in his room, watching movies or trying to keep a flawed relationship with his girlfriend alive through sporadic phone and email contact.

As the subtitle indicates, a core subject of the book is torture, yet it is never clearly and fully discussed, even in the two specific cases Edmonds describes. In one, he recounts Saedi kicking and hitting a detainee in the dank, smoky interrogation room; he otherwise portrays Saedi employing clever, if manipulative interrogation techniques and relying on informants to provide him with information. Edmonds agonizes over whether to report Saedi, knowing not only that it would rupture their relationship but that it might also lead to Saedi's replacement with an even more abusive personality. We never find out if Edmonds does report him, and if so what happened.

The other case of alleged torture is even more troubling and even murkier. Six Iraqi prisoners whom Edmonds says he had some responsibility for were spirited away to the Kurdish autonomous region. He tracks them down and finds that all of them showed signs of recent and egregious torture, including lashes, bruises and cuts. He suspects Americans were involved, though he fails to provide any details or explanation. Edmonds reports his suspicions to a general, who urges him to “tell the truth.” Eventually, an investigation is conducted by the unit's commander, but, Edmonds writes sarcastically, “of course, everyone is cleared.”

Throughout his book, Edmonds finds himself questioning what actually constitutes torture, and he finds himself torn between his desire to prevent insurgents from killing people, which might involve practices that could be defined as torture, and preventing or reporting instances of abuse. Most disturbingly, he had visions of himself strangling prisoners; frequently he expresses the desire to hurt, or even kill them. While this honesty may be admired, it is also something that should have been addressed. Edmonds does so by seeking therapy and, eventually, by writing this book. But once again, a reader is left to wonder: Where was the chain of command? And apparently it was still missing when Edmonds returned to service and was stationed in Germany. By the end of the book he's in Africa on a mission.

Ideally, a deeply personal story like this one would encourage the nation to focus more seriously on the health and well-being of its soldiers — and that would include the strain of narcissistic behavior that is evident here. Edmonds yearned to tell his story, and many of his book's best passages appeared in a long article in The Nation in November 2006, just after his return from Iraq but long before his mental breakdown. He also sought to display photographs from his tour of duty in Iraq at a popular coffee shop in Washington, D.C. This is not necessarily a bad thing, although most Special Operations personnel I've known shy away from such public displays. Edmonds's psychological needs — including his need for attention — were not met, and someone in authority should have noticed.

“God Is Not Here” shows how not to send a soldier to war; the experience is searing and often brutal, and only a well-led, well-trained, cohesive unit can help servicemen and servicewomen do their duty and survive both mentally and physically. Firsthand accounts like this one, however flawed, form an essential part of the documentation for historians and others to build upon. And in contrast to the Vietnam era, Americans have embraced rather than shunned their veterans, though as Edmonds's account so tellingly demonstrates, much more remains to be done.

Linda Robinson is a senior policy analyst at the RAND Corporation. Her latest book is One Hundred Victories: Special Ops and the Future of American Warfare.

This commentary originally appeared on New York Times on May 19, 2015. Commentary gives RAND researchers a platform to convey insights based on their professional expertise and often on their peer-reviewed research and analysis.