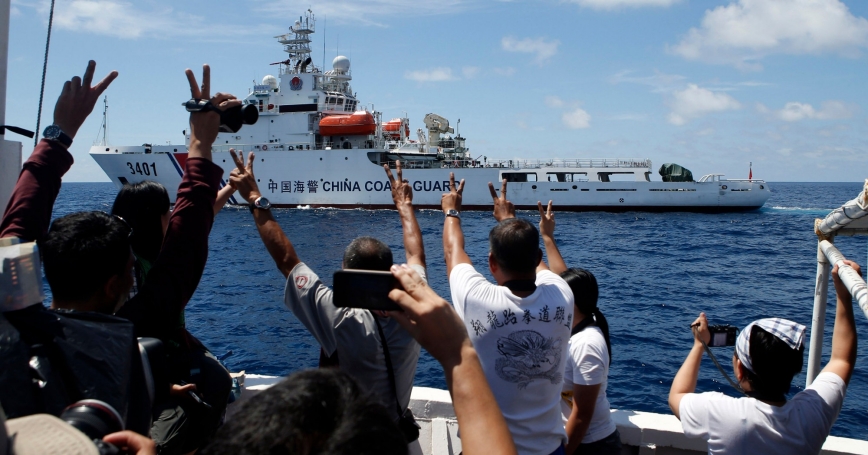 A Chinese Coast Guard vessel in the South China Sea maneuvers to block a Philippine supply ship with members of the media aboard, March 29, 2014

Last week, it was reported that the U.S. is considering sending Navy ships and aircraft to waters surrounding islands claimed by China in the South China Sea to demonstrate freedom of navigation. The reports follow a month-long media campaign calling attention to China's expansion of the islands to accommodate airstrips and military facilities. China's reclamation activity around the Spratly Islands also dominated conversations at last month's ASEAN meeting in Kuala Lumpur, with the organization's leaders issuing a statement warning that China's actions “may undermine peace, security and stability” in the region. The news of the proposed patrols now suggests the U.S. is considering toughening its response to China's assertive territorial claims in the contested South China Sea.

U.S. President Barack Obama had already criticized Beijing for using “sheer size and muscle” to push around smaller nations in the South China Sea. Chinese authorities have rebuffed those criticisms, arguing that the “relevant construction is lawful, justified and reasonable and thus beyond reproach.” In response to this week's reports, a Chinese Foreign Ministry spokesperson said Beijing was “deeply concerned” about the Pentagon's proposal.

While other countries have built and expanded facilities on other islands in the disputed area, China's construction activity stands out for its scale. According to U.S. Pacific Fleet Commander Adm. Harry Harris, China has created over four square kilometers of land across reefs in the South China Sea. Publicly available imagery confirms that construction now includes a runway capable of supporting military aircraft.

Moreover, China has complemented its island-reclamation activity with an array of administrative, legal and other governmental efforts to consolidate control over the area within the so-called “nine-dashed line,” a common Chinese term for the demarcation of its maritime claims in the South China Sea. In the past three years alone, China has consolidated its maritime law enforcement agencies into the Chinese Coast Guard, expanded its white hull fleet and patrol presence, strengthened the administrative powers of Sanya City over the nine-dashed line and expanded military exercises in the disputed waters. These policies reflect years of planning and high-level attention: China issued its five-year plan for maritime development in 2012, when it established its first central leading group for maritime affairs, led by current President Xi Jinping…

Timothy R. Heath is a senior international defense research analyst at the nonprofit, nonpartisan RAND Corporation. He is the author of the book, China's New Governing Party Paradigm: Political Renewal and the Pursuit of National Rejuvenation.

This commentary originally appeared on World Politics Review on May 15, 2015. Commentary gives RAND researchers a platform to convey insights based on their professional expertise and often on their peer-reviewed research and analysis.