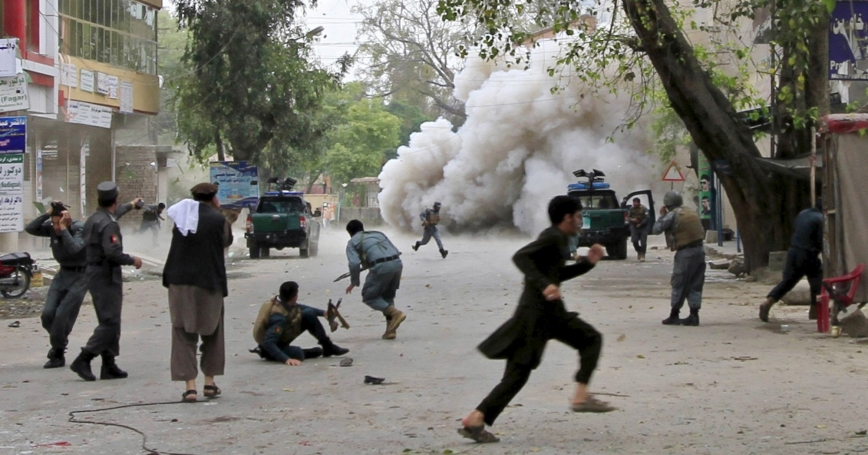 People run for cover after an explosion in Jalalabad April 18, 2015

In late February, 31 men, mostly from the Shiite Hazara minority, were kidnapped in Afghanistan, and remain held hostage. This week, five Hazara men were beheaded in the remote eastern district of Malestan, and 36 civilians were killed and 125 wounded in a suicide bombing outside a bank in the city of Jalalabad. These attacks have shaken an Afghan population hardened by decades of war, not just because of their brutality, but because of the whispered name some believe to be behind them: the Islamic State of Khorasan. But how real is the threat from this new group?

The Afghanistan-Pakistan region is a natural target for Islamic State expansion not only because the region has limited government and military, but also because of its history as home to mujahedin movements. Indeed, the very name Khorasan is a reference to the historical name of the region, one some associate with a hadith of the Koran heralding an Islamic caliphate. In January, ISK was formally made part of the Islamic State movement, with a former Pakistani Taliban senior leader, Hafiz Khan Saeed, named as its head. The bulk of ISK is thought to be in Pakistan, but the group is trying to make inroads into Afghanistan....

The remainder of this commentary is available on worldaffairsjournal.org.

Rebecca Zimmerman is an associate policy analyst at the nonprofit, nonpartisan RAND Corporation and a fellow with the Truman National Security Project.

This commentary originally appeared on World Affairs Journal on April 29, 2015. Commentary gives RAND researchers a platform to convey insights based on their professional expertise and often on their peer-reviewed research and analysis.