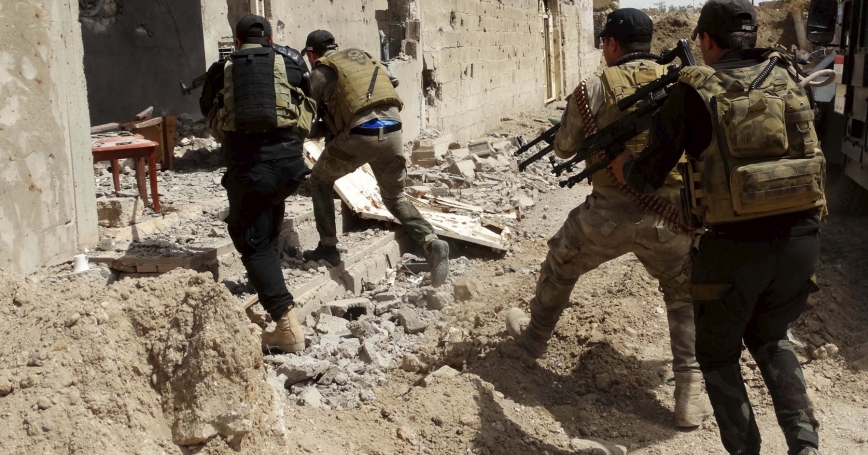 Iraqi security forces during a patrol, looking for Islamic State militants on the outskirts of Ramadi, April 9, 2015

Last week ISIL took control of the Iraqi city Ramadi and the Syrian city Palmyra, advances that the Iraqi government perversely subsidized. Iraq continues to fund ISIL by continuing salaries to the many Iraqi government employees who live in ISIL-controlled territory. That fact is a reminder of how poorly the country has been governed.

ISIL skims the money Iraq continues to pay public employees who live in areas captured and ruled by ISIL. One official estimate holds that it reaps hundreds of millions of dollars (PDF) each year from this source.

That's money that helps ISIL create hundreds of thousands of refugees, behead or crucify scores if not hundreds of people, murder thousands, create sex-slave markets, destroy irreplaceable archaeological and cultural sites, steal property based on religious affiliation or ethnicity of the owner, use and train child soldiers and otherwise make life miserable for millions of people.

The continued gains by ISIL make clear that the group is a major problem. But ISIL is not the only threat to the future well-being of the Iraqi people. The country's backwards economy presents a long-term danger as well. Iraq handing over money to ISIL is just one indication of much broader economic mismanagement.

Never mind Iraq's security disaster; the country has experienced an economic catastrophe after a decade of nearly nonexistent economic reform that featured rapid government hiring with little action to foster a stronger private sector. Rather than trying to shape a modern economy, Iraq's leaders have chosen to retain an economy that focuses on redistribution of oil revenues. The patronage and political power that go with that redistribution is evident in the explosion of government employment.

Oil revenues rose and Iraq tucked the money into more employees, a recurring government expense, even though oil prices are notoriously volatile. And in fact, they fell sharply in late 2008. By 2015, government employment was up to 5 million people—an additional 2.7 million people employed by the government rather than the private sector.

The fact that the government has all these dependents puts it in a bind. It could end payments to employees, effectively cutting off money to ISIL. But not only would that create a humanitarian problem, it would give ISIL a propaganda victory. The group could tell the largely Sunni recipients—the same sect as ISIL—that the largely Shia government in Baghdad—the Shia being a sect ISIL considers apostates—is abandoning them and that ISIL is their only protection. Or the Iraqi government could continue the payments, and thereby fund ISIL's war effort.

But expanding government employment is not Iraq's only economic failure. In late 2006, Iraq agreed to restructure two state-owned banks that constituted 70 percent of all banking assets in the war-torn country. Effectively bankrupt, the banks were failing to do what any normal bank should do—help fund the private sector. Several months later, the International Monetary Fund noted that the restructuring was to be finished in 2008.

Fast forward to March 2015 and an announcement from the IMF: Iraqi officials were “pressing ahead with the restructuring of state-owned banks Rasheed and Rafidain,” the two banks that were to be restructured by 2008. Private banks have emerged, but they are small and lend mostly to trade-related companies. As late as 2013, Rasheed and Rafidain held 70 percent of all Iraqi bank deposits and were likely insolvent, meaning that most private businesses throughout Iraq had—and still have—only limited access to normal business finance.

The government's willful disregard of economic reform can be seen in the country's ratings in the World Bank and International Finance Corporation's Doing Business ratings. The ratings provide a useful, although not complete, snapshot of the environment for private business.

Difficulties in Iraq include starting a business because of all the bureaucratic procedures, getting credit because of the failure to reform the financial sector and trading across borders.

This failure to foster expansion of the private sector and with it, private-sector taxes that could support government activities, has left the Iraqi government almost entirely dependent on oil revenues and at the mercy of oil price volatility.

Oil export revenues have comprised more than 90 percent of the Iraqi government's total revenues, which is sustainable as long as exports and prices are rising faster than government spending.

But in the past year, the price of a barrel of Brent crude—a global benchmark for oil prices—has fallen from more than $110 in June 2014 to less than $55 at the end of March 2015. By the end of April, it had risen to about $64, still well below last year's prices. So in June 2014, Iraq exported about 2.4 million barrels per day and earned almost $7.5 billion that month, but in April 2015 it exported more than 3 million barrels per day—a recent record high—and earned only $4.8 billion.

The failure of Iraq to reform its economy is understandable, but inexcusable. First, Iraq had a state-controlled economy for decades before the U.S.-led coalition invasion in 2003. Many political leaders and civil servants had never experienced a market economy. To loosen government bonds on the economy proved a difficult concept to grasp, let alone implement.

Second, economics has followed politics in the Iraqi case, and the shape of the political system remained up for grabs throughout this period. In a political competition awash with oil revenues, the most sensible short-term strategy is to use patronage power and government money to hire more government employees and build loyalty.

But Iraq is no longer awash in oil revenues, and it is at war. If ISIL is degraded so that it no longer represents a major threat, Iraq's political leaders will have to embark on political reconciliation among all groups and settle the fundamental question of how the country will be governed, how minority rights will be protected, and how all Iraqis can be made to feel they have a stake in the country.

And the oil money will still be there, as will the numerous government officials unfamiliar with the needs and governance of a private sector economy. The former will provide a tempting pool of resources for patronage. The latter, combined with the need for numerous approvals, will create a steady demand for bribes and their opposition to reform laws and regulations, either out of greed because fewer approvals will mean fewer bribes, or out of a sincere belief in government controls.

If the international community is concerned about Iraq's long-term well-being, it will need to uncharacteristically take a long-term perspective toward Iraq to help bring about economic reform. But most of the effort must come from Iraqi leaders, and this may require a new generation with exposure to a modern economy. Relevant steps should include streamlining business regulations and requirements, distributing or sequestering oil revenues based on a technical formula that removes a large share of the political decisionmaking about such revenues, reducing government payrolls, privatizing state-owned factories and banks and changing the tax system to raise more revenues from people and businesses, thereby making the government more answerable to the country's citizens.

Iraq's new government has taken small steps with its 2015 budget, but there is much more to do, with potentially high payoff: reform will decrease the country's dependence on oil and bring about the opportunity for a sustained increase in living standards.

There is some thought that oil-dependent countries simply cannot shift too far away from oil dependence. There may be some truth to this, and it may be true for Iraq. On the other hand, even if Iraq's leaders actually try to reform the economy, fixing these kinds of structural issues will be contentious and politically risky, and therefore extraordinarily difficult.

In the meantime, ISIL will continue to enjoy the Iraqi government's largess.

This commentary originally appeared on Politico on May 24, 2015. Commentary gives RAND researchers a platform to convey insights based on their professional expertise and often on their peer-reviewed research and analysis.