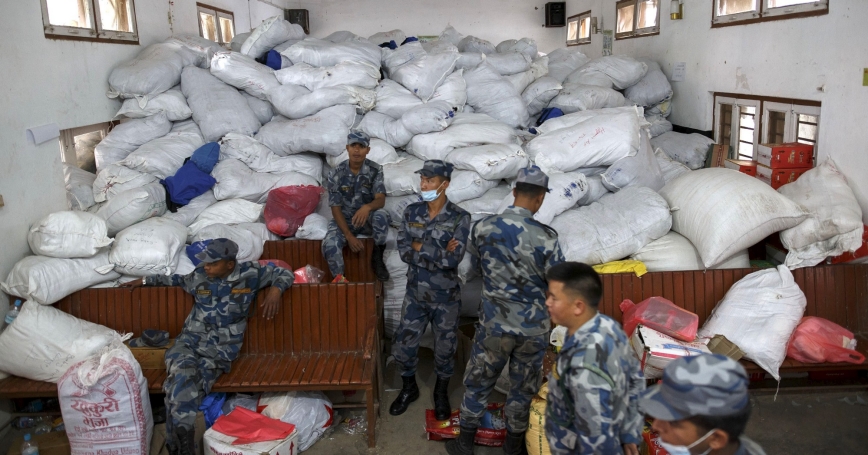 Media reports point to the Nepal earthquake as one of the most predicted natural disasters of all time. Experts had long feared Nepal, which sits atop colliding tectonic plates, would experience another earthquake and that it would be an especially deadly one given Kathmandu's dense urban population and the vulnerability of its many old and poorly constructed buildings. Given this early warning, authorities could have been better prepared to respond.

More than 7,000 people died in the magnitude 7.8 earthquake and more than 14,000 people were injured. International relief efforts went into full swing in the immediate aftermath. The United States provided a disaster assistance response team and heavy logistical support, including C-17s, helicopters and personnel, mainly U.S. Marines, under an agreement reached with Nepal's government after the event occurred.

However, in the critical first few weeks, these much-needed supplies were unable to reach the affected areas. Instead, they were largely piled up at points of delivery including Kathmandu airport. This delay was caused by red tape bureaucracy and general interference by Nepalese customs authorities who insisted that standard customs inspections and other procedures be followed, even in an emergency situation.

Prior responses to disasters similar to Nepal offer important lessons. One is the need to understand the internal procedures and capacity of the affected nation to make delivery of emergency supplies more efficient. In Haiti, the Port-au-Prince airport was too crowded to accommodate critical planeloads of relief supplies arriving in the wake of the 2010 earthquake. Failure to properly communicate on the population's needs resulted in inadequate supplies being provided in the aftermath of Cyclone Nargis that struck Myanmar in May 2008.

These kinds of bureaucratic challenges can be more easily overcome if they are identified and addressed before crises arise. Special agreements could be reached, perhaps in an international forum such as the United Nations, to allow for streamlining of processes in emergency situations. No doubt this would be complicated. Nepal is a sovereign nation with many layers of government and many departments involved, making timely action quite difficult. Advance planning would not change the number of players involved, but if terms were agreed to ahead of time the risk of red tape complications probably could be reduced.

Another important lesson from prior disasters is that these issues can be addressed by emphasizing disaster preparedness instead of simply focusing on the response once a disaster strikes. Regular security cooperation engagements, particularly in a regional context with multiple countries and agencies participating, offer an opportunity to set in place the institutions, bilateral and multilateral agreements, and personal relationships that can then be activated within hours of a disaster occurring.

The U.S. Marines executed earthquake-focused training events in Nepal in 2013 and 2014. Preparedness could be enhanced by expanding these kinds of exercises to include non-military security services, such as the customs service, to set procedures and identify the challenges that can slow decision-making in emergency situations. Broadening participation in training events can help the affected nations anticipate and address challenges, which would speed aid and, no doubt, save lives.

Disaster preparedness in the Asia-Pacific region is of particular importance to the United States because this part of the world bears the brunt of more than half of the world's natural disasters and is home to key U.S. allies. Planning and exercising with U.S. partners in the region — particularly those like Nepal that face known vulnerabilities — is a very important step in identifying procedural, bureaucratic and capabilities-based challenges before disaster strikes yet again.

Jennifer Moroney is director of RAND Australia and a senior political scientist at the nonprofit, nonpartisan RAND Corporation. She is the principal author of the RAND report “Lessons from Department of Defense Disaster Relief Efforts in the Asia-Pacific Region.”

This commentary originally appeared on U.S. News & World Report on May 7, 2015. Commentary gives RAND researchers a platform to convey insights based on their professional expertise and often on their peer-reviewed research and analysis.