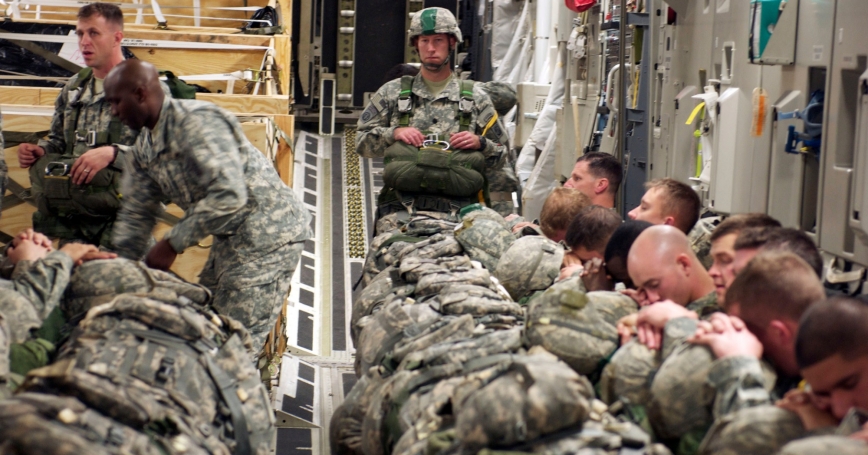 by Wendy M. Troxel and Regina A. Shih

On any given day, what many in the military crave is a good night's sleep. Yet even the idea of restorative slumber may be at odds with the culture of the armed forces, where the ability to go without shut-eye is sometimes seen as a badge of honor and acknowledging the need for sleep can be met with two words: Toughen up.

More than 60 percent of service members don't get the recommended seven to eight hours of sleep per night, and about a third get by on five hours a night or less, according to a recent RAND Corporation study.

Previous research has shown that restricting the sleep of healthy human subjects to five hours a night for four to five nights can result in making them seem legally drunk — thinking and reasoning skills, and overall performance, can all be impaired. Sleep problems can also predict poor mental health, including increased risk for depression (PDF) and post-traumatic stress disorder, as well as poor physical health outcomes, such as increased risk for obesity, diabetes and cardiovascular disease.

Struggling with sleep is a common reaction to stress, so it is perhaps not surprising that sleep problems are among the most common complaints reported by service members after returning from deployment. But the RAND survey of nearly 2,000 service members across all branches of the military showed that sleep problems, including short sleep duration and poor sleep quality, were common regardless of deployment.

The military's “mission first” Soldier's Creed leads to sacrificing sleep for operational demands. Some of the lifestyle issues that can turn sleep patterns upside-down may be easier to spot in the microcosm of the military — the stress of being deployed in a hostile environment, being away from family members or interrupting sleep cycles to digitally connect with those back home. The disruption can also be caused by something as simple as having to sleep essentially cheek by jowl in noisy barracks.

The quest for wakefulness can also play a destructive role. Service members, particularly the young and deployed, often jolt themselves awake with highly caffeinated energy drinks and use over-the-counter sleep medications to catch sleep when they can. Sustained use of stimulants to stay awake and sleep medications to fall asleep can create a vicious cycle leading to chronic sleep problems and dependence on these very agents.

What the military, and society at large, needs to do is give sleep its due by recognizing its importance as a crucial link to physical and mental well-being. Service members interviewed by RAND expressed just such a hope, while some said they'd already seen evidence of such a change within the military. They attributed the change to increased media coverage of the consequences of poor sleep and greater public awareness of the importance of sleep to overall health. For instance, a two-year-old Army health initiative called the Performance Triad puts quality sleep on par with good nutrition and exercise.

By raising awareness of the critical role sleep plays in daily life, we can help put to rest the misguided notion that needing sleep is a sign of weakness. Our research, and other studies, suggest one effective way to raise sleep's profile in society: Expand the five vital signs used by health care providers to measure the body's basic functions — body temperature, pulse rate, respiration rate, blood pressure and pain — to include a sixth: screening for sleep problems.

This commentary originally appeared on U.S. News & World Report on May 11, 2015. Commentary gives RAND researchers a platform to convey insights based on their professional expertise and often on their peer-reviewed research and analysis.