Will Putin Gamble All on a Broader Ukraine Invasion? 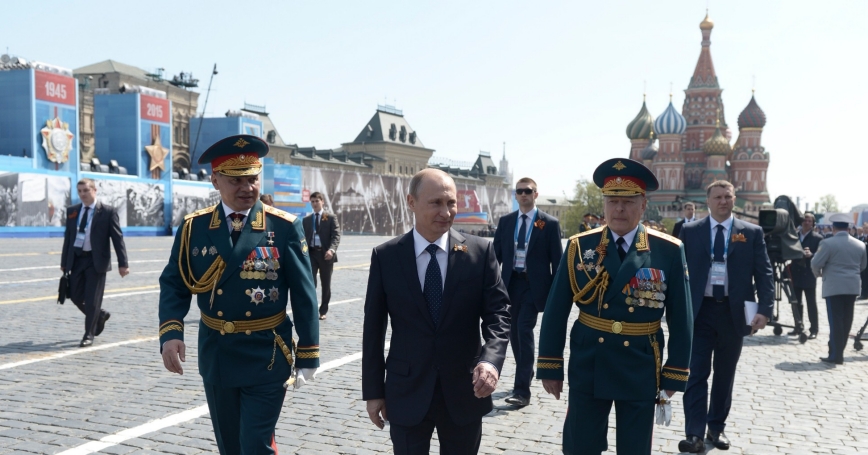 Westerners strain to predict Moscow's next moves in Ukraine, and elsewhere.

President Vladimir Putin may think that Russia can weather Western reactions if he decides to move beyond the occupied part of eastern Ukraine, perhaps seeking to forge a land bridge between Russia and Crimea.

But will he consider economic and political constraints, akin to those that hastened the fall of the USSR after its intervention in Afghanistan?

A Kremlin decision to widen its assault in Ukraine might not be irrational. But would it be imprudent? This question is more complex.

NATO Commander General Philip Breedlove warns that Russian forces have “reset and repositioned,” and may be preparing a fresh offensive in Ukraine. Were this to happen, the amount of force required would make it hard for the Kremlin to keep alleging that Russian military units were not fighting or soldiers were not dying in Ukraine.

The Kremlin would expect that expanded military thrusts would lead the West to ratchet up economic sanctions. But in light of current European opposition, Moscow may doubt that the West would begin arming Ukraine.

In any event, the Kremlin may think that Russia would succeed before any Western arming could be militarily decisive. Moscow would not expect NATO forces to intervene. Finally, the Kremlin may calculate that new territory seized would become permanent treasure, whereas over time Western sanctions and other measures of displeasure would ebb.

One issue is whether a wider attack would worsen Russia's economy. Sanctions, lower energy prices and state interference already weaken it. Although the extent of GDP decline thus far is modest, consumption is down by a tenth and investment may have fallen much more.

The Kremlin is touting import substitution, a discredited economic strategy. Small and medium-sized enterprises are often sources of innovation and supply chain efficiency, but they comprise a quarter or less of Russia's economy. This is a much lower share than in developed countries. Rampant corruption raises the costs of goods and services. Finally, for many years Crimea and occupied eastern Ukraine will be financial drains on Moscow.

Another consideration is whether new military action would strengthen the Kremlin's hold on power. Although the annexation of Crimea elevated Putin's public support, cracks in the edifice are appearing. Putin is unable to control a dispute between the Federal Security Service, which he once headed, and his strongman in Chechnya.

Ramzan Kadyrov has ordered the shooting of federal officials who enter the region without his permission. Extreme nationalists, some of whom Putin has empowered, resent his failure to seize all of Czarist-era “New Russia,” now southern and eastern Ukraine. In the 2000s, when energy prices were high, Putin gained much of his popularity. Now that living standards are starting to fall, disaffection may grow. Labor strikes by unpaid workers are now breaking out.

A third issue is whether a renewed assault would help Russia gain international respect. The invasion of Ukraine and intimidating military exercises in the Baltic region are causing NATO not to cower, but to move forces closer to Russia's borders and perhaps spend more on defense.

Isolation from the West and its capital markets, and lower global energy prices, undermine Russia's bargaining position with China. Commercial ties are increasing, but Russia is now more a price taker and junior partner.

It is uncertain whether Russia's military, with its heavy reliance on one-year conscripts, could secure and hold new territorial gains in Ukraine against a possible insurgency.

If it is contemplating further action in Ukraine, the Kremlin faces a tough choice. The decision could have an enduring impact on Russia's fortunes.

The late Georgian President Eduard Shevardnadze told us of his outrage that a few senior members of the Soviet Politburo decided to launch a full-scale invasion of Afghanistan in 1979. The Soviet economy was on a downward course and the war further sapped it. The conflict led to the deaths of large numbers of soldiers. Then as now the authorities tried to hide them. A decade after the invasion Soviet forces withdrew in defeat, and two years later the USSR collapsed.

The incursion in Ukraine is modest compared with that of Afghanistan, and the number of Russian deaths is far smaller. Yet once again a limited number of Kremlin leaders, without benefit of public debate, may make a fateful decision about using force against a neighbor. The leaders should bear in mind the lesson of Afghanistan and exercise caution.

This commentary originally appeared on Newsweek on May 25, 2015. Commentary gives RAND researchers a platform to convey insights based on their professional expertise and often on their peer-reviewed research and analysis.