Yemen: Victim of the Saudi-Iranian Rivalry 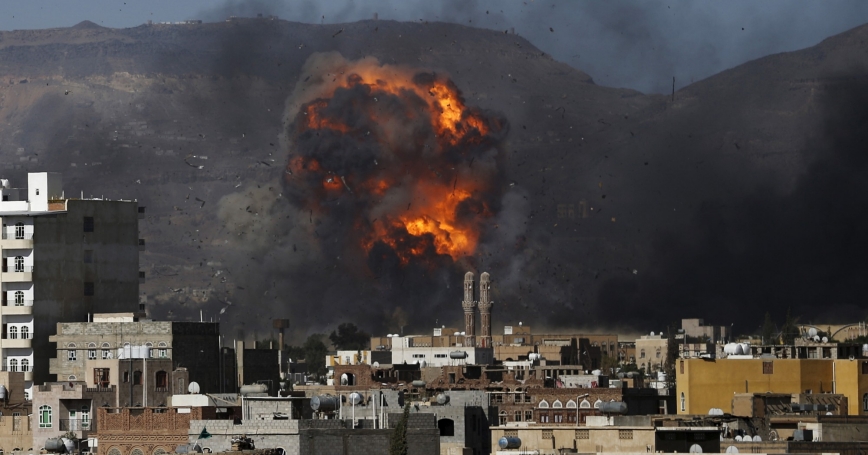 An air strike hits a military site controlled by the Houthi group in Yemen's capital Sanaa May 12, 2015

Yemen has become the latest arena for the Saudi-Iranian rivalry roiling the Middle East. What was once an internal struggle for power among various Yemeni factions and personalities has turned into a proxy war between Riyadh and Tehran.

The Houthi takeover of the capital and other major cities has prompted Saudi air strikes against multiple military and civilian targets. The Houthis, most of whom belong to a branch of Shia Islam, are viewed as Iranian “proxies” by the Saudis. Iran, while maintaining limited leverage over the Houthis, has done nothing to disabuse the Saudis of this notion. Tehran views the Houthis not as a strategic ally, but rather as a useful counter to its chief regional rival. Meanwhile, U.S. military support for the Saudi campaign against the Houthis may serve to reassure a key Arab ally wary of the emerging nuclear deal between Iran and the United States.

But in the end, neither side in the conflict is likely to emerge as a clear winner. Saudi Arabia is unlikely to impose its will on Yemen; Iran is not going to greatly expand its influence on the Arabian Peninsula; and the United States will have to contend with al-Qaeda in the Arabian Peninsula (AQAP) as it gobbles up more Yemeni territory.

Absent a political solution, Yemen is likely to slide into further instability with grave consequences for all involved.

Saudi Arabia fears a nuclear deal between Iran and the P5+1 (the United States, the United Kingdom, France, Russia, China and Germany) will usher in détente between Washington and Tehran and invariably boost Iran's power. After all, Iran is the predominant regional power now engaged in Iraq, Syria and Lebanon. And it is more likely than not that Iran would exploit future instability in other Arab countries, especially if it undermines Saudi authority.

Riyadh views the Houthi ascent in Yemen as the next step of Iran's regional agenda. In reality, the Houthis had fought against Yemen's central authority long before Iran decided to take notice of them. Also, the Houthis, and Yemen in general, have been peripheral concerns for Iran. But the Saudi perception of the Houthis as Iranian pawns has become an opportunity for Iran to exploit Saudi fears.

The Saudis may fear Iranian ambitions in the Middle East but Iran strongly perceives Saudi Arabia as fuelling efforts to undermine the Islamic Republic and its allies. This fear underlies Iranian expansion throughout the Arab world. While Iran may be perceived as aggressive in the Arab world, Iranians themselves see their country under siege from the Sunnis and their allies in the West, particularly Washington. From Tehran's perspective, it is no surprise that Washington has provided support for the Saudi campaign.

Iran is unlikely to provoke the United States and complicate the nuclear negotiations by overtly interfering in the Yemeni conflict, keeping its support for the Houthis low-key and limited. However, Iran will continue to view the Yemen conflict as a way to provoke and deplete Saudi Arabia.

But while the Yemen war has become an extension of the Saudi- Iranian rivalry, it could also serve as a good opportunity for détente between the two countries. Iranian President Hassan Rohani has expressed an interest in dialling down tensions with Riyadh. And it is possible that pragmatic Saudi leaders may come around to this view.

Relations between the two powers, while never great in the past three decades, have been at times manageable and superficially cordial. Instability in Yemen does not benefit Iran, Saudi Arabia or the United States. AQAP is a major threat to all three countries. And neither side in the Yemeni conflict has the capability to impose central authority in Yemen by itself.

Without a political solution negotiated by Washington, Tehran and Riyadh, the poorest country in the Arabian Peninsula may turn out to be the next Syria or Libya, a perennial source of radicalism and terrorism infecting the Middle East. A nuclear agreement between Iran and the United States is an opportunity for de-escalation, rather than a zero-sum push for regional supremacy by Saudi Arabia and Iran.

Of course, this may be all wishful thinking. Iranian and Saudi leaders seem committed to defeating the other. Pragmatic voices in both countries may be drowned out by sectarian fears and a “victory on the horizon” mentality. But there is no foreseeable victory. All sides are losers in this conflict, especially the people of Yemen.

This commentary originally appeared in The Arab Weekly on May 8, 2015. Commentary gives RAND researchers a platform to convey insights based on their professional expertise and often on their peer-reviewed research and analysis.