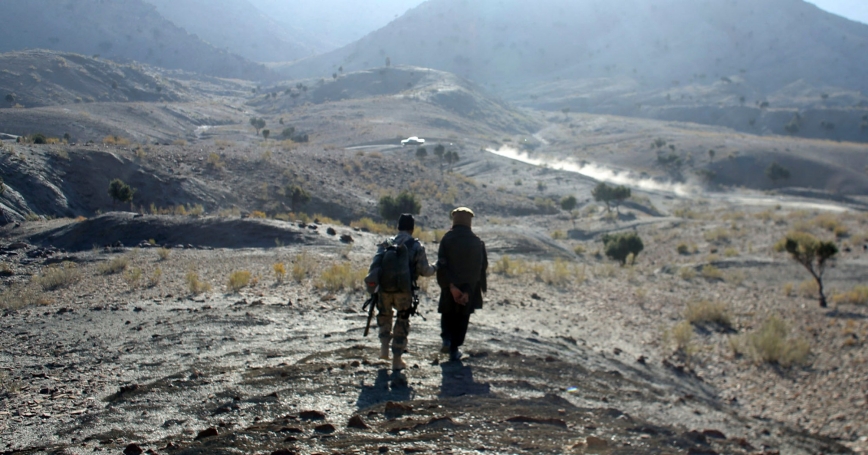 For over a year, the Islamic State (also known as ISIS) has been attempting to expand into South Asia. ISIS has developed a loose organizational structure in Afghanistan and Pakistan, provided money to local groups, and adopted a confrontational approach to the Afghan Taliban and al Qaeda—all on al Qaeda's home turf, no less. Its goal is straightforward: to co-opt disaffected local militants in an effort to build influence and power in the region.

ISIS in South Asia, which it calls the Islamic State of Khorasan, is larger than most recognize, boasting between several hundred and several thousand fighters. And its push into the subcontinent has led to numerous skirmishes with the Afghan Taliban, the largest and best-organized militant group in Afghanistan. In early June, for example, ISIS and Taliban fighters engaged in pitched battles in Shinwar, Achin, and other districts in Nangarhar province.

Despite these developments, some analysts have dismissed the presence of ISIS in Afghanistan and Pakistan as fictitious at worst or grossly exaggerated at best. In a May article in Al Jazeera, for example, Aimal Faizi, a journalist and former spokesperson for Hamid Karzai, argued that ISIS' presence in Afghanistan is largely a “manufactured myth,” used by Afghan and U.S. officials for political purposes.

There may be a kernel of truth to his assertion. Some Afghan officials, for instance, have likely exaggerated the presence of ISIS in Afghanistan as a way to pressure Washington to keep U.S. forces in the country or to blame Pakistan for meddling in Afghanistan's internal affairs. Local authorities have certainly exploited concerns about ISIS to their own advantage: Earlier this year, The New York Times reported that officials in Afghanistan's Ghazni Province had manufactured a story about ISIS beheadings in an attempt to draw military support from Kabul in 2014.

To be sure, it will be difficult for ISIS' South Asia branch to dominate the other extremist groups in the region. A variety of competing jihadist organizations already exist there and ISIS' ideology does not have strong local roots.

Even so, ISIS' recruitment strategy in the region has already met with some success. As the group gains a toehold among Afghan and Pakistani militants, the region could be in store for more conflict, including between militant groups.

In the spring of 2014, as ISIS was consolidating its hold on the city of Raqqa in Syria and expanding into Iraq's Anbar Province, the group's leaders contacted militants in South Asia. ISIS apparently hoped to gauge the possibility of expanding its influence in the region and recruiting fighters to come to Iraq and Syria.

ISIS had just been kicked out of al Qaeda following a series of personal, ideological, and command-and-control disputes. Yet its plan for expansion into Afghanistan and Pakistan followed a strategy its former ally had perfected: try to co-opt local militants. Al Qaeda had done so to great effect in Iraq, Somalia, Yemen, and North Africa, and had thereby avoided the inefficient, labor-intensive process of building foreign affiliates from scratch.

As ISIS leaders began a series of discussions with groups in Egypt (including Ansar Beit al-Maqdis), Libya (including factions of Ansar al-Sharia), and later in Nigeria (including Boko Haram), they also began to contact militants in Afghanistan and Pakistan. South Asia seemed promising for ISIS. The region had a long history of nurturing jihadist groups, dating back to the anti-Soviet wars in the 1980s; relatively weak governments, which provided the opportunity to secure safe havens in areas under limited state control; and ongoing wars against “infidel” regimes and their Western backers.

As they eyed expansion into the region, ISIS leaders also concluded that there were serious problems with the ideologies and strategic visions of several local groups, including al Qaeda and the Afghan Taliban. In the December 2014 edition of its online magazine, Dabiq, the group's propagandists published a blistering cover article that outlined those concerns. The author accused al Qaeda and the Afghan Taliban of selling out Islam by supporting tribal law over sharia, failing to effectively conquer and control territory, neglecting to target Shiite populations, and erroneously recognizing international borders. The article also brazenly criticized Mullah Muhammad Omar, the leader of the Afghan Taliban, for practicing and preaching a bankrupt, distorted version of Islam.

One of the few groups to escape ISIS' excoriation was the Tehreek-e-Taliban Pakistan (TTP), formed in December 2007 as an umbrella organization of various militant groups in the region. The TTP “were upon great good,” the Dabiq article concluded. “They carry the Salafi creed and hope and strive to establish the laws of Islam in their region.” ISIS had matched its words with deeds. Around September 2014, ISIS sent representatives to Pakistan to meet with local militants, including some TTP leaders, following several months of discussions. Around the same time, Pakistani officials began receiving reports of pro-ISIS leaflets in the Federally Administered Tribal Areas.

By January, Hafiz Saeed Khan, the former chief of the TTP's Orakzai branch in Pakistan's tribal areas, had been named leader of ISIS' South Asia branch. His deputy was Mullah Abdul Rauf Khadim, an Alizai tribesman and former Taliban commander from Helmand Province who rose to prominence after his 2007 release from the U.S. facility at Guantanamo Bay, Cuba.

Saeed and Khadim's established networks would become crucial to ISIS' recruitment efforts. Saeed was particularly helpful in expanding the terrorist group's footprint in Pakistan's tribal areas and in the Afghan border provinces of Kunar and Nangarhar, where some TTP operatives had fled following Pakistani military operations. Khadim, on the other hand, helped develop ISIS' network in Pakistan's Baluchistan Province and in the Afghan provinces of Helmand and Farah.

By late 2014, U.S. and Afghan officials had become sufficiently alarmed about Khadim's activity and threat to U.S. forces that they began to consider a strike against him. On February 9, 2015, a U.S. drone locked onto Khadim's vehicle in Afghanistan's Helmand Province and fired a missile at it, killing Khadim and several others.

Over the following months, ISIS focused on co-opting more fighters and expanding its networks in eastern, southern, and western Afghanistan, and in Pakistan's Baluchistan Province and tribal areas.

Everyone Loves a Winner

ISIS' expansion strategy for Afghanistan and Pakistan includes three main components. First, ISIS has attempted to attract new members by exploiting personal and factional grievances within established jihadist networks. Indeed, the earliest leaders of the South Asian branch joined up following disputes within their former organizations. In Pakistan, Saeed had grown disenchanted with the TTP after he was passed over for the organization's top spot, following the death of several leaders, including Hakimullah Mehsud, in 2013. In southern Afghanistan, Khadim had taken issue with what he claimed was an unbalanced tribal representation in the Taliban's inner shura, or consultative council, according to interviews with his aide conducted by the Afghanistan Analysts Network. Khadim and other Afghan Taliban commanders had also grown disillusioned with Mullah Omar, whose unknown status and whereabouts has led to speculation about whether he is still alive.

Second, ISIS doled out money to encourage defections. ISIS was flush thanks to smuggling oil, selling stolen goods, kidnapping and extortion, seizing bank accounts, and smuggling antiquities in Iraq and Syria, among other activities. Its leaders were willing to spend money—perhaps as much as several hundred thousand dollars—to build networks in South Asia.

Third, ISIS used its victories in Iraq and Syria to attract some recruits. The group continues to hold substantial territory in the Middle East following its 2014 blitzkrieg campaign. “Some locals appear to be attracted to their battlefield success in Iraq and Syria,” a senior U.S. military official in Afghanistan said. “And everyone loves a winner.” ISIS has been quick to exploit these victories through a sophisticated social media campaign.

Despite these developments, ISIS leaders in Iraq and Syria do not appear to exercise operational or tactical control over commanders in Afghanistan and Pakistan. For now, ISIS in South Asia is closer to a loose affiliate than a direct arm of the organization.

What's more, ISIS faces substantial hurdles in the region because of a crowded field of jihadist groups and its lack of an ideology with strong local roots. Populist militant groups in Afghanistan and Pakistan have generally latched on to extreme interpretations of locally established strains of radicalism, such as Deobandism. But ISIS' ideas remain imports—and not necessarily popular ones.

Still, ISIS could benefit from progress on reconciliation discussions between the Afghan government and the Taliban. There are some Taliban factions that would almost certainly defect to groups like ISIS in the event of a peace deal. But if ISIS wants to expand in South Asia, it will likely need to recruit a more charismatic leader in Afghanistan who can attract more fighters and funding. ISIS commanders have expressed interest in Mullah Abdul Qayum Zakir, a hard-line former military commander of the Afghan Taliban who stepped down last year after an internal power struggle. ISIS will also need to continue co-opting local militants. In this respect, the allegiance of fighters of the Islamic Movement of Uzbekistan (IMU), a group traditionally tied to the Taliban, could provide additional momentum.

Finally, ISIS will have to fight other groups, particularly the Afghan Taliban, to expand its market share. In early June, ISIS apparently suffered heavy losses during clashes with the Taliban in the western province of Farah, suggesting that it will be an uphill battle. Fighting the Taliban may be its most difficult challenge, and one that could have profound implications for violence in the region.

Seth G. Jones is director of the International Security and Defense Policy Center at the nonprofit, nonpartisan RAND Corporation, and an adjunct professor at Johns Hopkins University's School for Advanced International Studies. He is the author, most recently, of “Hunting in the Shadows: The Pursuit of al Qa'ida since 9/11” (Norton).

This commentary originally appeared in Foreign Affairs on June 11, 2015. Commentary gives RAND researchers a platform to convey insights based on their professional expertise and often on their peer-reviewed research and analysis.