The Enemy You Know and the Ally You Don't 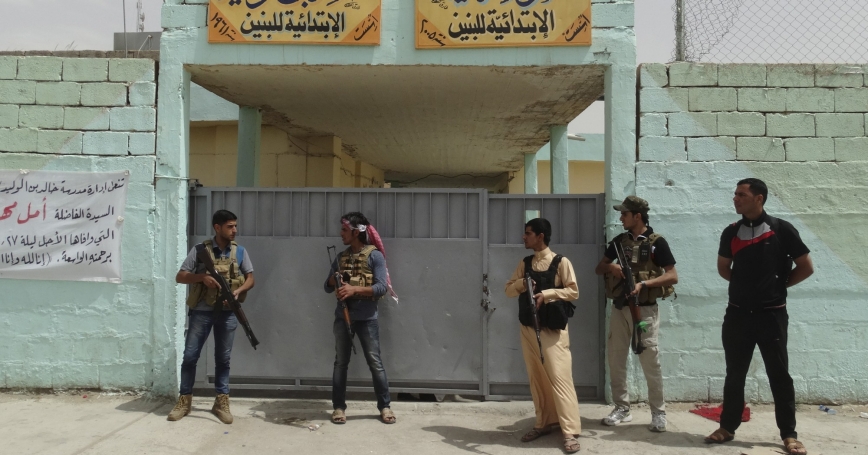 Sunni tribal fighters stand guard near a school used as a shelter for displaced people in the city of Ramadi, April 11, 2015

In the weeks since the Islamic State captured the Iraqi city of Ramadi, a loud and diverse chorus of voices, including the New York Times editorial board, has called for the Iraqi government and the United States to arm Sunni militias to fight the extremist group's advance. The administration increased the number of U.S. trainers last week, adding an additional 450 as early as this summer to the 3,100 American troops already in Iraq. Regardless, current political and military dynamics on the ground may merit giving arms to Sunni fighters if the Islamic State can't be pushed back soon.

But the decision to hand weapons over to the Sunni militias also poses risks. Before directly arming more ethnic- or sectarian-aligned militias, both U.S. policymakers and the public should have a deeper understanding of our potential allies' past and their possible future interests. And what the unintended consequences of arming these Sunni militias might be.

Newly declassified documents from the Islamic State's predecessor, captured during a U.S.-Iraqi raid in 2010 and published by the Combating Terrorism Center at West Point, suggest that some of Iraq's most prominent Sunni politicians collaborated with the Islamic State's predecessor in 2009, when the group faced its darkest hour. Some of these senior figures may have worked with the Islamic State to benefit themselves, some to benefit the Sunnis, and some to weaken the hand of the Kurds in Iraq's ethnically mixed areas in the country's north. While the threat of the Islamic State has moved these dynamics to the back burner today, they will likely reemerge if and when the security environment improves. And now some of these same politicians are lobbying the United States to send money and weapons to the militias from their territories.

While most of the U.S. public hadn't heard of the Islamic State before its breakout last summer, the group declared an “Islamic State of Iraq” back in 2006 and maintained a presence in the northern city of Mosul through the U.S. military's withdrawal in 2011. Conventional wisdom says that the Islamic State's place in Iraq's sectarian political strife rose out of the disarray that followed the U.S. withdrawal. It was at that moment that Iraq's Sunnis were left to fend for themselves against the domineering, Shiite-oriented central government. The Islamic State's resurgence in Iraq in 2013 and 2014 came at a time when the country's Sunni minority was ripe to accept the group as a bulwark against political marginalization and crackdowns at the hands of then-Prime Minister Nouri al-Maliki's government.

In this telling, which has dominated U.S. media and policy circles, Maliki and his Shiite allies in the Iraqi government bear the brunt of the blame for inciting the renewed sectarian tensions that enabled the Islamic State to reemerge and unleash the brutal campaign that has arrested the world's attention.

The new documents published by the CTC suggest the need to approach this conventional wisdom with caution. They have important implications for understanding Iraq's sectarian schism and for informing the ongoing policy debate on how to stabilize the war-torn country.

A key document sent to Abu Omar al-Baghdadi, who preceded Abu Bakr al-Baghdadi as the group's leader, suggests that the Islamic State established cooperative relationships with key Sunni politicians by 2009 that gave it access to extortion opportunities, kickbacks, and other revenue-generating activities in and around Mosul. Assuming the document is authentic — for the moment, there is no evidence to suggest it is not — these revelations should give pause to those recommending that the Iraqis train and equip local Sunni forces under the auspices of the provincial governments in Nineveh and Anbar. Reporting from Mosul indicates that similarities between Sunni government officials and the Islamic State likely continued after U.S. troops withdrew from Iraq, and Maliki's government began to intensify its repression of Sunni political leaders.

It is impossible to know the specific motivations of these officials — Sunni politicians may simply have been buying themselves protection in an environment where no other party was able or willing to provide it. But what is clear is this: For the Islamic State, these relationships enabled the group to access tens of millions of dollars to finance its operations in 2009 and after, some of which may have been diverted from Western reconstruction aid through political favors and phony contracts. The Islamic State likely used these funds to expand its extortion and intimidation networks in Mosul even prior to the 2011 U.S. withdrawal. This would go far in explaining how it had become so rich, even before it seized over $400 million from Mosul's bank vaults last June.

One document dated August 2009 — when the Islamic State was regrouping in Mosul following military defeats in Anbar and Baghdad — sent from a senior Islamic State operative known as “Hatim” to Abu Omar al-Baghdadi, provides evidence that the group remained active in Mosul throughout the period by financing itself through project-skimming and extortion of contractors. In one example of these arrangements, the Islamic State claimed a $4 million profit from a construction contract in east Mosul. The expected revenues from these deals ranged from $7 to $34 million each.

The operative's report on this special project describes how Islamic State agents established relationships with the Iraqi central government and with high-level Sunni politicians in Nineveh province, which forms the northern tip of the so-called Sunni triangle. Several Sunni politicians, according to the operative, had agreed to give the group access to lucrative contracting and extortion opportunities. As the author describes it, the Islamic State sought to “infiltrate the infidel government administratively, for the purpose of directing some of the economic and financial decisions issued by the apostates … also to benefit from the possibility of recruiting individuals from the infidel government as sources of information.”

These opportunities would have been a significant boon to the Islamic State during a period after senior U.S. intelligence officials declared the group “essentially defeated.”

To be sure, some uncertainty remains about how far the Islamic State went toward exploiting these opportunities. The author of the key document, likely a high-level Islamic State operative in Iraq, was making a direct entreaty to the Islamic State's top leaders to allow the group to move forward with more deals after many months of internal bureaucratic bungling, inertia, and poor communication. It is possible that the Islamic State cut these deals short to avoid being a party to Sunni politics — the group's radical version of Islam views democratic politics as idolatrous — but this raises the question of why the group's third-in-command, a Swedish extremist of Moroccan descent called Abu Qaswarah, purportedly directed these activities in the first place.

These arrangements could have also affected the course of Iraq's sectarian politics by increasing mistrust of the Sunnis by Iraq's Shiites and Kurds and contributing to sectarian political conflict, which further marginalized Iraq's Sunnis. The Islamic State operative's report names several individuals, including some of Iraq's most prominent Sunni politicians: Atheel al-Nujaifi, the former governor of Nineveh; Dildar al-Zibari, the former deputy chairman of the Nineveh Provincial Council; Faruq Abd al-Qadir, the former Iraqi minister of communications; and Hajj Riyad, the director of the office of then-deputy Prime Minister (and later Minister of Finance) Rafi al-Issawi.

At least two of these figures, Qadir and Zibari, wittingly aided the Islamic State, according to the report. Qadir had reportedly placed two Islamic State operatives in official government positions in the Ministry of Communications. Other officials were reportedly more reluctant to collaborate, but eventually capitulated. Hajj Riyad and Qadir, who was also head of the Nineveh Reconstruction Council at the time, had initial hesitations about collaborating with the Islamic State but buckled under additional pressure, according to the documents.

Fast forward to today: Several figures described in the document remain key players in Iraq's Sunni political landscape. Atheel al-Nujaifi, governor in absentia of Nineveh and the brother of Iraqi Vice President Usama al-Nujaifi, continues to try to build a 3,000-man local security force to fight the Islamic State after he was sacked in May, when a majority of Iraqi MPs voted to fire him for corruption and complicity in the fall of Mosul to the Islamic State. Even if such a security force ostensibly fell under Prime Minister Haider al-Abadi's National Guard, Nujaifi has indicated that he would continue to “work as a politician in the governorate and will be a fighter in the liberation process.”

In September of last year, Nujaifi paid (PDF) $300,000 of his own money to a Washington consulting firm to help rally support among influential foreign-policy elites and policymakers in the United States for his plan to arm a state militia for Nineveh. This May, Nujaifi and Issawi met with key players in Washington's foreign-policy circles and gave a talk at the Brookings Institution. In the talk, Issawi emphasized the dire security situation and pleaded for help, arguing that the Shiite militias are nearly an equal threat to the stability of Iraq as the Islamic State is. Issawi also noted that he and Nujaifi were two of the few Sunnis to participate in politics since the beginning of the new Iraqi state, as others boycotted politics for years. The sidelining of such key Sunni politicians diminishes the chances that successful political reconciliation between Iraq's Sunni and Shiite groups will occur.

If members of Iraq's Sunni leadership indeed had ties to the Islamic State, it raises serious questions about these figures as reliable long-term partners and as stewards of their own security forces. The U.S. strategy in Iraq hinges on putting in place a power-sharing agreement based on a willingness by all parties to set aside narrow sectarian agendas. However, none of the major political blocs — Sunni, Shiite, or Kurd — appear likely to change their zero-sum calculus. Political leaders on all sides have demonstrated a willingness to do whatever it takes to advance their sectarian agendas. And in the case of Sunni leaders, this has likely included direct cooperation with the Islamic State.

The Islamic State's recent victories against government troops in Syria and against Iraqi security forces in Anbar are alarming signs of its growing power and influence. In this context, proposals to arm and support Sunni-led provincial forces are compelling. But policymakers also must consider the prospects for eventual demobilization. Arming provincial militias will increase the power of Iraq's governors, which would complicate eventual disarmament and could even spark new fighting among Iraq's factions. Disarming tribal militias would prove easier, but the tribes have been weakened in the years since they joined U.S. forces to fight al Qaeda, and some now openly back the Islamic State. If Iraq needs more security forces, the United States should help to reform and strengthen the troops Iraq already has. Going around them is only asking for trouble.

Benjamin Bahney is a member of the adjunct staff and Patrick B. Johnston is a political scientist at the RAND Corporation. Patrick Ryan is a former U.S. Army intelligence officer who served in Iraq during 2005–2009, and Co-Founder of Second Front Systems.

This commentary originally appeared in Foreign Policy on June 23, 2015. Commentary gives RAND researchers a platform to convey insights based on their professional expertise and often on their peer-reviewed research and analysis.