Tunisia in the Crosshairs 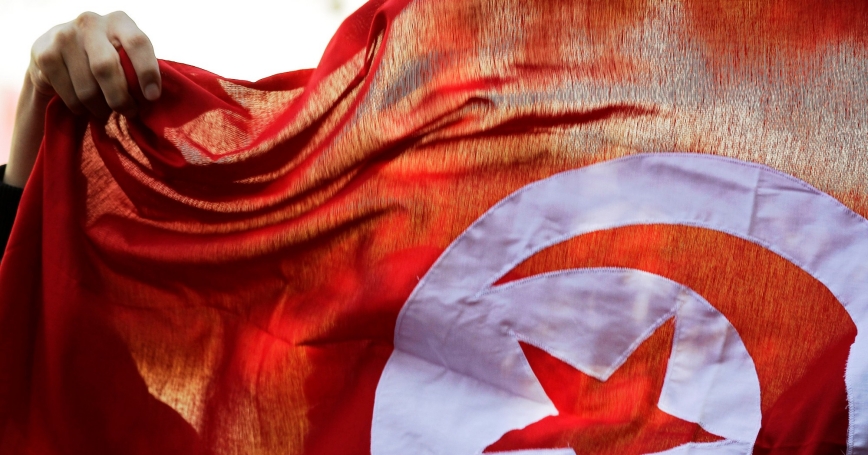 A Tunisian holds up a flag during celebrations marking the fourth anniversary of Tunisia's revolution, Tunis, January 14, 2015

About a week before the Islamic State group issued its threat, we stood on the steps of the Tunisian Parliament in the capital city of Tunis, in the same spot where a Tunisian soldier had provided cover for tourists fleeing the terrorist attack at the adjacent Bardo National Museum on March 18. Standing on those steps, after two days of meetings with Tunisian executive branch officials, civil society leaders and business leaders and before another series of meetings with Tunisian legislative leaders, it was impossible not to reflect on the potential long-term consequences of the March attack, let alone those that could soon follow.

Prior to the Bardo museum attack, Tunisia has been on a trajectory to democracy, political stability, economic openness and social tolerance. Virtually alone in the Islamic world, Tunisia has successfully integrated moderate Islamic leaders into its government, led the Arab world in supporting the rights of women and navigated the security challenges associated with being sandwiched between two larger, and substantially less secure, neighbors (Algeria and Libya). The museum attack had the potential to derail all of this progress and more by scaring away tourists, siphoning off resources and diverting the attention of leaders.

Instead, throughout our meetings, including the final ones with parliamentary leaders, we heard strong commitments to political reform, to the development of human capital and to domestic security. On the security front, there were especially strong pledges to improve border security, confront the Islamic State group, engage youth and divert them from the path of radicalization.

These commitments and pledges will have to be pursued in an austere budget environment in Tunisia and in the United States, as both countries juggle other claims and demands. Nevertheless, there is a compelling justification to make Tunisia and its security a strategic U.S. priority. Tunisia sits at Africa's northernmost point, potentially offering the United States strategic access to an increasingly troubled region that is now sending tens if not hundreds of thousands of refugees a year, mostly via Libya, to Europe. Equally important is to help Tunisia retain its role as a beacon for its neighbors as a stable, peaceful, pluralistic and democratic Arab state.

The Obama administration understands the importance of Tunisia. On May 21, President Barack Obama met in Washington with Tunisian President Beji Caid Essebsi to assure him that more U.S. aid was on its way to protect Tunisia's gains and to help sustain its fledgling democracy. Obama also designated Tunisia a “major non-NATO ally,” which clears the way for Tunisia to receive more military aid and other upgraded security arrangements.

Just four days later, however, another security incident caused alarm in Tunis. Seven Tunisian soldiers were killed and 10 wounded when one of their fellow soldiers opened fire inside the central army barracks. The gunman was killed in the resulting exchange of fire. It was a stark reminder that the path to success in Tunisia will be long and winding and perhaps never assured. Meanwhile, up to 3,000 Tunisian citizens have joined the fight in Iraq and Syria, most joining the Islamic State group, which has targeted Tunisia's vulnerable disenfranchised youth.

Which brings us back to the threat on Tunisair. The mere threat to the airline, amplified by the advance warning to Muslims, constitutes an economic attack against Tunisia, whether or not there is a physical attack. The open-ended nature of the threat suggests that the Islamic State group intends to target Tunisia for the long haul. The United States should do the Islamic State group one better, countering the threats against Tunisia with steadfast and sustained cooperation and assistance.

This commentary originally appeared on U.S. News & World Report on June 22, 2015. Commentary gives RAND researchers a platform to convey insights based on their professional expertise and often on their peer-reviewed research and analysis.