War or Peace? Putting a Price on the Israeli-Palestinian Impasse 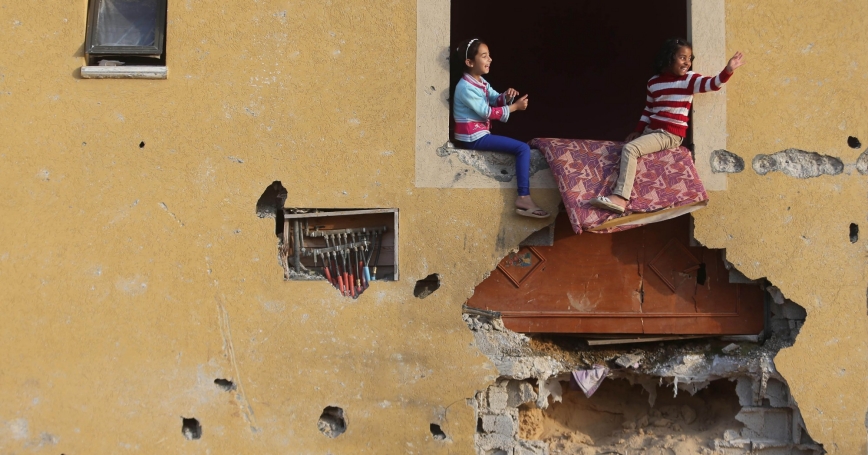 Palestinian girls at their family's house in Khan Younis in the southern Gaza Strip, March 10, 2015

For much of the past century, the conflict between the Israelis and Palestinians has been a defining feature of the Middle East. Despite the billions spent to support, oppose or seek to resolve it, the impasse has endured.

After decades of failed U.S. and international efforts to prod the Israelis and the Palestinians toward a two-state solution, hopes for an end to the standoff remain dim. But what if a resolution were suddenly in the offing and the fighting were to give way to a new era of peaceful coexistence? Not only would lives be saved and destruction stopped but both sides would share in a peace dividend that could be measured in the tens of billions of dollars.

The existing impasse affects Israelis and Palestinians in many ways. There are the direct costs of the conflict and the economic opportunities lost because of it, like trade, investment and tourism. There are costs associated with internal and external security, like deterring terrorist threats. There are higher costs of transport as a result of security measures. There also are the intangible and difficult to measure human costs associated with such a long, uncertain and occasionally violent conflict.

We recently examined the potential net costs and benefits over the next 10 years of five scenarios that could play out in the region—a two-state solution, coordinated unilateral withdrawal by Israel from most of the West Bank, uncoordinated unilateral withdrawal by Israel from some of the West Bank, nonviolent resistance by Palestinians and a violent Palestinian uprising.

Predictably, the two-state solution, in which a sovereign Palestinian state is established alongside Israel, would bring the biggest economic benefits for both sides. A violent Palestinian uprising, perhaps including participation by foreign terrorists, would be the most costly.

Over a decade following a two-state solution, we estimate Israel's gross domestic product would be $123 billion larger than it would be under present trends, and the Palestinian economy would be correspondingly $50 billion bigger. But because Israel's economy is so much larger now, the Palestinians would gain more proportionately.

We estimate the average per capita income among Palestinians would increase by approximately 36 percent over the 10 years, while Israeli per capita income would rise by 5 percent. Of course, realizing such gains would require substantial public and private investment to take advantage of the new opportunities, not only by Israeli and Palestinians but also new capital flows from the international community.

Ours is not the first study to demonstrate the benefits that would be derived from a two-state solution. Nor are we the first to show that violent uprising would be the worst outcome. So why has the Israeli-Palestinian impasse endured?

Meanwhile, a number of broad trends are exerting influence on developments in the region. Demographic trends foreshadow a Palestinian majority in the territory that makes up Israel and the West Bank and Gaza. Continued Israeli settlement expansion in the West Bank is making it more difficult to move settlers in the event of a negotiated solution.

Israeli concern about the emerging boycott, divestiture and sanctions movement is growing. Israeli President Reuben Rivlin recently labeled it a “strategic threat of the first order.” An open media environment allowing instant communication of events can hinder compromise. Regional instability—including the rise of ISIS; civil wars in Syria, Libya and Yemen; Iran's regional ambitions; and the collapse of governance in Libya and the Sinai—raises the pressures on both sides.

While our findings make a strong case for the two-state solution, this hardly makes it the most likely outcome. Economics are but one factor in a complex political dynamic.

Today, more than 90 percent of Israelis and Palestinians were born after 1948 and have known nothing other than some version of the impasse. Our analysis shows that both sides could be better off with a stable two-state solution and that prolongation of the impasse for another generation would have real costs.

This commentary originally appeared on Newsweek on June 9, 2015. Commentary gives RAND researchers a platform to convey insights based on their professional expertise and often on their peer-reviewed research and analysis.