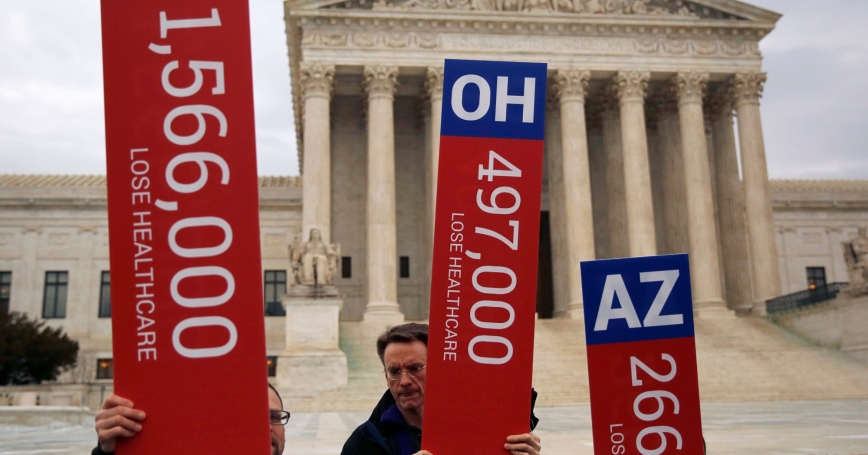 Later this month, the Supreme Court is expected to hand down its ruling in the case of King v. Burwell, a challenge to the Affordable Care Act (ACA) with potentially major consequences for millions of Americans who have received health insurance under the law's coverage expansion provisions.

The central question in this case is whether or not tax credits and cost-sharing subsidies can be provided to Americans in states that did not opt to set up their own state-based insurance marketplace (also known as exchanges). If the court rules in favor of the petitioners, Americans in the 34 states that have not set up marketplaces and are instead relying on marketplaces established and run by the federal government could lose their subsidies.

If tax credits and subsidies are deemed illegal in these states, health insurance could become unaffordable for many, and the likely exodus of young and healthy people from the market could lead to premium escalation. RAND research estimates that elimination of the tax credits in the 34 affected states could cause marketplace premiums in those states to rise by 47 percent, and 8 million fewer people to enroll in insurance.

Although the Supreme Court's decision could have a major influence on the number of people who are insured due to the ACA, it will affect only those individuals enrolled in the ACA's marketplaces, and then only in those marketplaces run by the federal government. The vast majority of Americans who have employer-sponsored insurance will be largely unaffected by the decision. The fact that the decision could have major consequences for marketplace enrollees with little impact for others raises the question: Are Americans aware of the court case? And if so, what do they know about the details of the Supreme Court challenge?

To address these questions, between February 15 and March 1, we conducted a survey of 2,390 individuals between the ages of 18 and 64 about their knowledge of King v. Burwell. We asked respondents if they knew about a current Supreme Court case challenging how the ACA is being implemented.

Awareness and Understanding of King v. Burwell Among U.S. Adults, Age 18 to 64

Of those that knew of the case, we asked respondents if they knew what aspect of the law could be affected by the Supreme Court's decision. Only 18 percent of those who knew about the case could correctly identify what effect the case might have. Of the overall population between 18 and 64 years of age, 5.8 percent both knew of the case and could correctly identify its main effects. Again, we found no significant difference in knowledge between residents in potentially affected states and unaffected states.

We also looked at whether knowledge was related to an individual's current source of insurance coverage.

Awareness and Understanding of King v. Burwell Among U.S. Adults, Age 18 to 64,
by Insurance Type

Those covered through the marketplaces — both state and federal ones — were significantly more likely than the uninsured to know both of the case and what effect it might have. However, knowledge even among marketplace enrollees is low, with only 15 percent knowing of the case and correctly identifying its focus.

Overall, these results indicate that a minority of Americans are aware of the Supreme Court challenge, and fewer still can correctly identify even the most basic facts about the case. We found no difference in knowledge among residents of states with federally facilitated marketplaces and those with state marketplaces. While those with marketplace insurance are somewhat more knowledgeable, fewer than one in five enrollees of either state or federal marketplaces understood the specific details of the challenge. The lack of awareness even among those with a high stake in the court's outcome suggests that many enrollees in state marketplaces could be in for an unwelcome surprise should the Supreme Court challenge succeed.

Katherine Carman is an economist and Christine Eibner is a senior economist at the nonprofit, nonpartisan RAND Corporation.