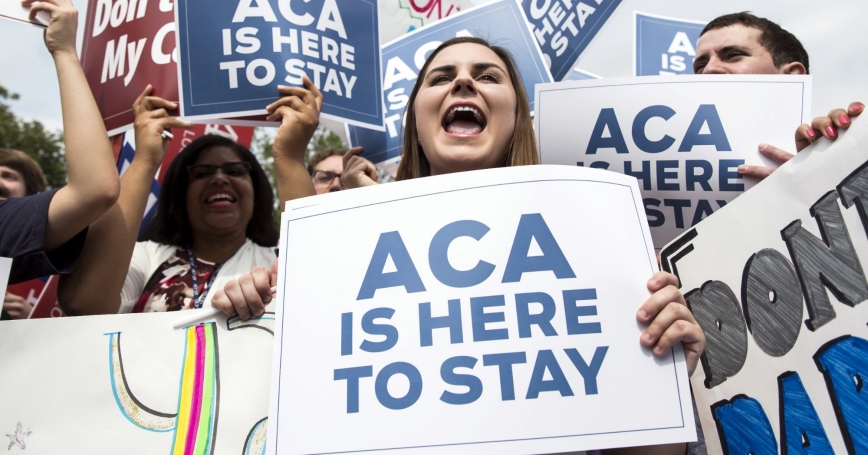 Supporters of the ACA celebrate after the Supreme Court ruled in favor of the Obama administration, Washington, DC, June 25, 2015

Economic reasoning took center stage in the Supreme Court's decision on Thursday to uphold the legality of the Affordable Care Act's subsidies in all states. Specifically, the majority opinion refers to the potentially “calamitous” results for health insurance markets if the subsidies were eliminated while the law's other health insurance rating provisions remained in place. These provisions include the health care law's requirement that health insurance companies offer coverage to all comers, and prohibitions preventing insurance companies from charging higher prices to sicker people. Without the stabilizing effect of the subsidies, these two provisions could have led to high premiums, low enrollment and unstable markets. But, as the majority decision sums up the law's intent: “Congress did not enact the law to destroy the health insurance market.”

The King v. Burwell case challenged the legality of providing subsidies to people in states that deferred to the federal government to set up health insurance exchanges, the new online marketplaces for buying and selling health insurance without going through an employer. In 2015, 34 states use the federal exchanges rather than operating their own. Another three states use a hybrid system in which the state operates the exchange but uses the federal exchange technology platform. If the ruling had gone the other way, individuals in all 37 states were at risk of losing access to subsidies.

The court concluded that the subsidies were part of a set of “interlocking reforms” intended to stabilize health insurance markets while expanding access and maintaining affordability for sicker people, who spend more on health care. If implemented in isolation, the requirement that insurers cannot deny coverage and cannot charge sicker people higher premiums could bring an influx of sicker people into the market and increase premiums to unsustainable levels. To guard against this possibility, the health care law requires that most Americans obtain coverage or pay a fine, and provides subsidies to lower-income individuals (earning between 100 to 400 percent of the federal poverty level). Combined, these policies create incentives for younger, healthier people to enroll in health insurance. These enrollees exert a stabilizing effect on the market and keep premiums from escalating. In an analysis of the potential consequences of a ruling upholding the King challenge, RAND estimated that eliminating the subsidies could cause individual market premiums to increase by 47 percent and lead to an 8 million person increase in the ranks of the uninsured.

So far, the approach of coupling health insurance rating reforms with mandates and subsidies appears to be working. Premiums for a benchmark plan on the Affordable Care Act' s exchanges rose by an average of just 2 percent between 2014 and 2015, well within growth trends from prior periods. In an analysis of prescription drug utilization, the University of Pittsburgh and RAND found that those enrolled on the exchanges had lower drug spending and lower utilization than those with employer coverage, suggesting that the exchange population is not dominated by sicker enrollees. And, tellingly, in New York state — which required insurance companies to offer coverage at the same price to all comers in the individual market, even before the Affordable Care Act went into effect — individual market premiums fell by 50 percent between 2013 and 2014. The New York experience suggests that offering health insurance subsidies and imposing the ACA's individual mandate, in an environment where rate restrictions like New York's already even the playing field, can dramatically reduce premiums.

Rather than taking a narrow, literal reading of one phrase from the law, the court took a broader view, interpreting the words “in their context” within the overall legislation and the history of health reform in the United States. From a legal perspective, there was substantial uncertainty regarding how the court might rule, but the economic reasoning in support of the Affordable Care Act was never in doubt. As RAND's research has shown, the subsidies are critical to ensuring that healthy people, with lower health care costs, have adequate incentive to enroll.

This commentary originally appeared on U.S. News & World Report on June 26, 2015. Commentary gives RAND researchers a platform to convey insights based on their professional expertise and often on their peer-reviewed research and analysis.