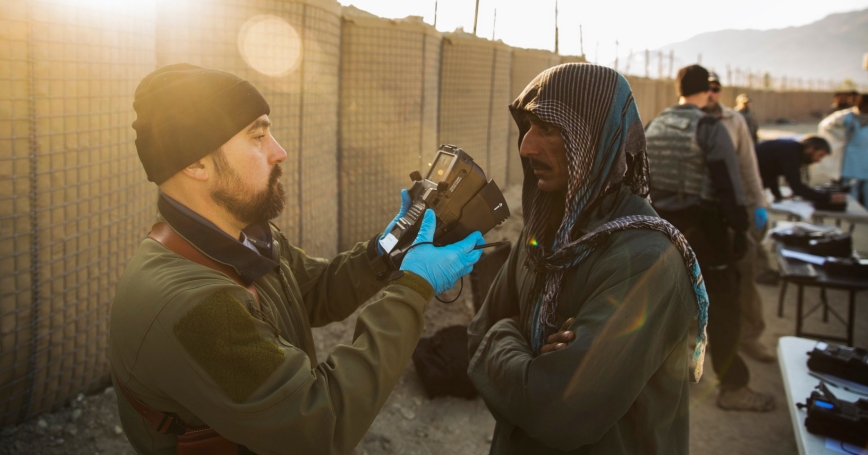 A contractor captures biological data of a local man in the Laghman province of Afghanistan, December 14, 2014

As the needle inched up toward 65 miles an hour, my breathing slowed almost to a halt and I started to see stars. It was early 2013, and I was having a panic attack on the New York State Thruway. I had them almost daily then, ever since a child I befriended had been blown up on the streets of Kabul, just around the corner from me the year before. Since I had failed to save her, I believed I would fail at most everything else too: career, doctorate, relationship.

In the last decade, Americans have grown increasingly familiar with the struggles of post-traumatic stress among combat veterans. But I'm not a veteran. I'm one of an untold number of federal workers, contractors, aid workers and journalists who have returned home from a conflict zone with our own invisible wounds. We often refer to ourselves as frontline civilians.

In mid-2007 I sat at the pre-deployment training center at Fort Benning in Georgia, feeling like Goldie Hawn's clueless character at Army boot camp in the movie “Private Benjamin.” I was on my way to Afghanistan. It wouldn't be my first war zone, but it would be my first time living with the military and working in an area of large-scale active combat. As a social science researcher, I would see some six deployments to Afghanistan over the next eight years. My years living through war would fundamentally reshape me, making me tougher and more vulnerable than I ever expected to be.

Most Americans don't understand what frontline civilians do. People tend to assume we're safely typing memos inside an organization's headquarters, especially if we're government workers, their contractors or grantees. That's not true for those of us in the field. Daily life built around war often involves waking up on a remote base and working side by side with soldiers and civilians in hazardous places.

The surge of 2010 was a difficult time for the war. I heard little hope expressed by our forces, many of whom felt nothing had improved over their many rotations. One unit in Kandahar reportedly kept a tally of the number of limbs its soldiers lost each day. An Afghan police chief I met was known to our forces as a rapist, murderer and extortionist, but they could not get him removed from his post. Locals shared stories about demeaning shakedowns by Afghan policemen and spoke of an international presence that handed out so much money it had twisted the local economy and social hierarchy.

Taking my findings back to Kabul felt like shouting in the wind—it seemed like nobody wanted to hear these disheartening tales if they thwarted a narrative of progress. When two of my military colleagues were killed—one in an ambush and the other taken hostage and executed—everything suddenly felt incredibly futile. I had arrived in Afghanistan with a sense of purpose that was soon accompanied by the feeling that I was bearing witness to the best and worst of humanity.

It made my time there one of the most profound experiences of my life. War is, of course, complex and morally confusing, but the mental toll it takes year after year is exhausting and debilitating. And yet it is the work that I love—trying to understand how conflicts evolve, in the hope that I can play a small role in bringing the war to the quickest, most humane end possible. I have yet to feel a commensurate sense of purpose back home.

The war zone experiences of frontline civilians are heightened by a cowboy culture, where the biggest risks, the toughest tours, earn respect—and can lead to post-traumatic stress disorder. Yet there are powerful taboos against frontline civilians seeking help, mirroring what it was like for the military in the early days of the wars in Iraq and Afghanistan. Many, myself included, feel that to admit to trauma is to inappropriately equate our experiences with those of veterans who've known the darkness of combat. But the day before I left on yet another trip to Afghanistan, a Marine friend sat me down at a Fourth of July barbecue in 2013—and assured me that it was OK for me to need help.

It wasn't easy to find a therapist comfortable talking about rockets, guns and war guilt. A volunteer organization that provides therapy for combat veterans and families agreed to take me on because I was the domestic partner of a soldier. When that therapist couldn't relate to my experiences, she told me to find a specialist in combat-related mental health issues. Friends in the local veterans community got me into a nonprofit program that usually provides state-of-the-art PTSD therapy to military veterans. I mainly engaged in talk therapy but also underwent eye movement desensitization and reprocessing, a treatment that mimics deep sleep as it tries to help patients process trauma. It helped me come to terms with the most searing of my experiences.

I've been far luckier than many of my friends. Frontline civilians often don't get the care and support that they need, whether in an area of crisis and instability, or when they return home. A 2013 RAND study of more than 600 frontline military contractors found that 25 percent had symptoms of PTSD, a rate higher than that experienced by military service members, which ranges from 8 to 20 percent. There's no system in place to provide care for frontline civilians who have separated from service.

It's hard to know how many frontline civilians with PTSD are out there, but in my social circle it feels like an epidemic. Tens of thousands of frontline civilians have served in Afghanistan and Iraq. The lines we draw between the various groups—federal, private sector, nonprofit humanitarian organizations, media—help keep us apart when we come home.

In large part, combat veterans owe the improvements in mental health services of the last decade to the American public, who demanded better care for those who fought for our country. This cultural shift has yet to happen for the frontline civilian community. Not everyone who serves in war carries a gun, but every American who bears the burden of war deserves care and support back home.

Rebecca Zimmerman is an associate policy analyst at the RAND Corporation, a doctoral candidate at Johns Hopkins University School of Advanced International Studies, and a fellow of the Truman National Security Project where she co-founded the Frontline Civilians Initiative.

A version of this commentary was published July 6, 2015 by the Los Angeles Times.