Ebola and Syria's Chemical Weapons Show U.S. Can Leave Nothing to Chance 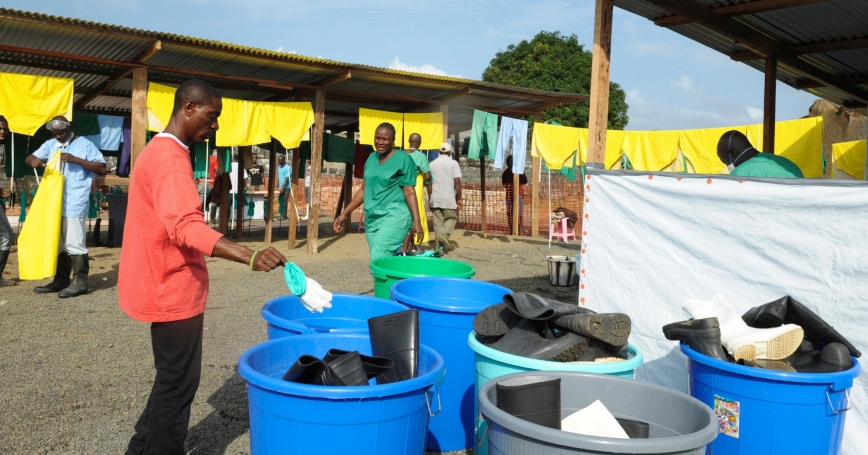 Over the past four years, three very different “black swan” chemical, biological, radiological and nuclear events (known as CBRN) have occurred, including the Fukushima Daiichi nuclear disaster in Japan, the threat posed by chemical weapons in Syria and the Ebola outbreak in western Africa. The response to these events demonstrated an ability to adapt to uncertain and evolving conditions during a crisis, but they also serve as warnings that preparedness is hardly perfect. The United States and its international partners should view these events as learning opportunities that could help improve preparedness and response capabilities before the next crisis strikes.

“Black swan” is a term used to describe high-impact events that are both rare and difficult to predict. In each of the three cases, the situations were exacerbated by a confluence of existing conditions. In Japan, an existing seawall was breached by the tsunami (PDF), catastrophically damaging three of the reactors. Spent fuel that might have been moved to long-term storage remained in cooling tanks that eventually ruptured. A series of human failures coupled with uncertainty about the situation in the reactors contributed to poor decisionmaking. In one such case, a U.S. aircraft carrier uncertain of the radiological cloud, sailed into a contaminated area.

In Syria, the international community and the United States faced challenges in destroying stockpiles of chemical weapons, acting only after weapons had been deployed with deadly effect. For years, through programs such as the Nunn-Lugar Cooperative Threat Reduction, the United States funded the elimination of chemical weapons and other types of threats. However, this was the first time that the destruction entailed removing the weapons from an active war zone. It was also the first time that destruction of the weapons would occur on a ship. While the use of chemical hydrolysis for neutralizing the chemicals was a practiced method, marrying the removal of the weapons via ship and onboard hydrolysis was a highly innovative, though untested, technique.

Finally, it was certainly not the first time that humankind had been exposed to the Ebola virus, but it was the first time since the original identification of the virus in 1976 that Ebola had expanded its reach beyond limited geographical areas that were easily contained. The number of cases in this outbreak exceeded the total number of previously identified cases by more than an order of magnitude. Thankfully, estimates of the potential for infection of over 1 million people did not come to pass. Still the response to the Ebola outbreak would certainly have been better if it had not been hampered by delays in response, bad communication, inadequate consideration of local norms regarding burials and a general lack of coordination.

The response to these events, while problematic in some ways, mostly demonstrated the capacity to react and adapt to black swan events and showed that existing programs were largely targeted at the right issues. For Fukushima, the models that had been developed by the Department of Energy and the Department of Defense (PDF) assisted in plotting the radiological plume. Unmanned aerial systems and robots were used to sense radiation levels. The stockpiles of medical countermeasures, particularly potassium iodide, that were provided proved to be appropriate and necessary. The innovation demonstrated with the Syrian chemical weapons destruction was important to elimination of a significant threat. It also demonstrated the importance of interagency collaboration for decisive, rapid action. In responding to the Ebola outbreak, medical countermeasures sponsored by the Department of Defense and others led to the use of rapid diagnostics and trials for therapeutics that were in development as well acceleration of the approval process for an Ebola vaccine.

The decision by Defense Department developers to make information for Ebola diagnostics systems available helped accelerate approval of an Emergency Use Authorization by the Food and Drug Administration (FDA). Also worth highlighting was the FDA's willingness to grant similar authorizations for several other Ebola-related products such as the therapeutics and vaccine.

Yet these three examples also highlight where improvements in preparedness and response capabilities must be undertaken. Improved information sharing could help avoid confusion during the initial response period. Better surveillance and warning systems could also help prompt quicker responses. Fiscal decisions should take into consideration the possibility that unusual large-scale crises can occur at any time. The vast array of international collaborators, including governmental and non-governmental relief organizations, should work together to develop the kinds of trusted environments that can facilitate rapid response and precision delivery of needed assistance.

Dealing with black swans should not be left to chance. The United States and its international partners should build on the lessons learned during the recent crises in Japan, Syria and western Africa. This should go beyond merely identifying what worked and what didn't. Preparedness can only be achieved by learning from previous events and taking actions resulting in thoughtful planning, coordination and communication before crisis strikes.

This commentary originally appeared on U.S. News & World Report on July 8, 2015. Commentary gives RAND researchers a platform to convey insights based on their professional expertise and often on their peer-reviewed research and analysis.