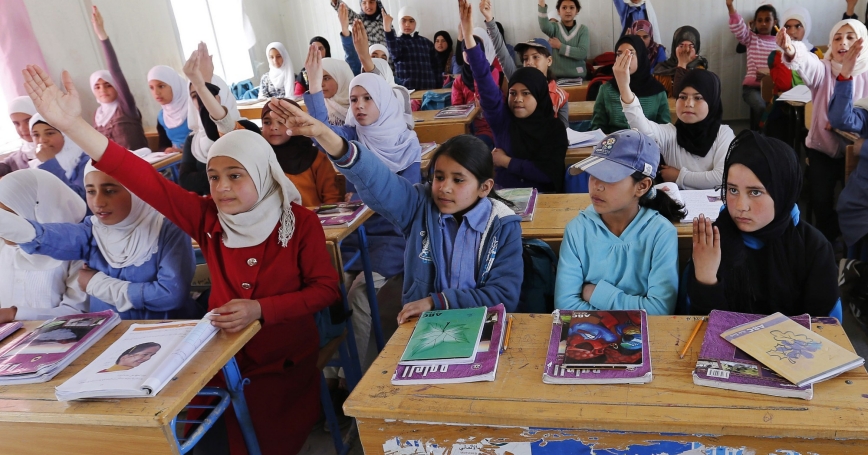 Syrian refugee students raise their hands as they attend class in a UNICEF school at the Al Zaatari refugee camp, Jordan, March 11, 2015

Standing in a classroom of Syrian refugee teenagers in Jordan's Zaatari refugee camp, we posed a question: “What do you want to be when you grow up?” Hands around the room shot up. “I want to be an engineer so I can rebuild Syria,” said one girl. “I want to be a lawyer so I can fight for my country,” said another. Teacher, football coach, archaeologist, carpenter and musician were some of the other aspirations offered by girls and boys.

Their answers revealed courage, creativity and determination. Sadly, however, even the modest hopes of these teenagers are unlikely to be realized. These children are part of a generation that is brimming with potential, but lacks the educational and livelihood pathways through which to channel their energy and aspirations. As the international community struggles to find ways to bring an end to the violence and bloodshed in the region, it must not allow the plight or the potential of these young refugees to be overlooked.

The United Nations just announced that there are now 60 million displaced people in the world — the highest number since World War II. Much of the surge in the past few years has come from the Syrian civil war, which has displaced about half of its 22 million population, both internally and as refugees in neighboring countries.

Over 620,000 Syrians have fled bloody conflict at home to register as refugees in neighboring Jordan. While the vast majority of the Syrian refugees in Jordan live in urban areas (over 80 percent), over 81,000 of them now reside in the Zaatari refugee camp. The national and international efforts to provide essential services in Zaatari are momentous, and today this refugee camp has become Jordan's fourth largest city. Over half of Zaataris' inhabitants are under the age of 18. When we spoke to students within the camp's schools, they showed resilience, strength and the very human will to seek a better future.

But across host countries, only half of school-age Syrian children are enrolled in school, with about 60 percent of Syrian children in Jordan enrolled. Attendance rates are unknown. Many children have been out of school for several years, causing incalculable damage to their personal development and, over the longer term, threatening the health of their societies. Children who have been out of school for lengthy periods cannot fit easily back into a standard classroom, and new programs have not been designed and implemented for these children at the scale needed.

In Zaatari, other camps and urban areas, pathways through education and into the labor market and adulthood are fragile and opportunities are uneven. There are not enough schools for all of the Syrian children, and classrooms are overcrowded. For girls, early marriage is widespread, often leading them to dropout or miss key stages. Child labor is a major barrier for boys, as they are all too often forced to choose between the immediate need to help their families survive and the longer-term gains offered by education. If a Syrian refugee does graduate, opportunities to progress to higher education are rare, and there are legal barriers to employment.

While they have their rights — like the right to an education, to live free from violence, to grow up in a positive environment — breached in so many ways, the children we spoke with demonstrated that their desire to hold on to them is both instinctive and resolute. But without a fundamental shift in the approach to refugee education and livelihood paths more broadly, no amount of enthusiasm will allow them to realize their potential.

To that end, the government of Jordan, UN agencies, and NGOs are working hard to provide educational opportunities. Jordan is by no means the first country to be leading such a significant emergency education response — half of the world's refugees are children, and many countries before have faced the challenge. Syria is the biggest source of displacement, with Afghanistan and Somalia as the next biggest refugee sources. Yet, while it is important to note that each emergency education response is unique and responsive to its context, there is a pressing and ongoing need to apply lessons learned across the world so that responses center on informed policy. These lessons include supporting existing public services rather than setting up long-term internationally managed parallel education systems; rapidly expanding school spaces so that every child has a spot; and creating programs tailored to help children integrate into host country education systems. There is an intense need for programs that use resources as effectively as possible to make aid contributions count for Syrian refugee children in Jordan.

Even more importantly, the international community has a responsibility to use diplomatic and other means to end the crises in Syria and the continued, unprecedented level of displacement it has caused. The best emergency education programs in the world are no substitute for the stability and access to educational pathways to adulthood that are taken for granted in other parts of the world.

What might happen to children who grow up realizing that their dreams, of becoming doctors and lawyers, mechanics and carpenters, have been placed beyond their reach? What kind of long-lasting impact will this frustration and wasted potential have on the families, communities and the countries that they live in? The international community must shoulder responsibility for confronting these difficult questions and provide for refugee education to avoid turning the displaced youth of Syria into a “lost generation.”

Shelly Culbertson is a policy analyst at the nonprofit, nonpartisan RAND Corporation. Tom Ling is a senior research leader, and Marie-Louise Henham and Jennie Corbett are analysts at RAND Europe.

This commentary originally appeared on U.S. News & World Report on July 17, 2015. Commentary gives RAND researchers a platform to convey insights based on their professional expertise and often on their peer-reviewed research and analysis.