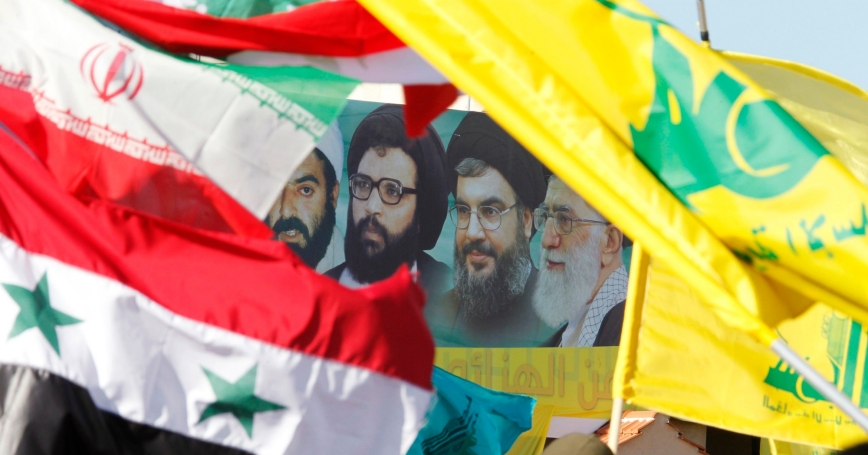 A poster of Ayatollah Ali Khamenei, Hezbollah Secretary-General Sayyed Hassan Nasrallah, and others behind Iranian, Syrian, Lebanese, and Hezbollah flags during Resistance and Liberation Day celebrations in Bint Jbeil, Lebanon, May 25, 2014

While the nuclear arms accord with Iran is being hailed as a historic agreement, it should be regarded as only one piece of an increasingly complex patchwork of foreign policy challenges presented by Iran and its network of allies. As a result of this deal, Iran stands to reap a potential windfall of billions of dollars that has been held up by international sanctions designed to cripple the Iranian economy and bring Tehran to the negotiating table.

Even if most of this money is channeled to Iran's domestic economy, the bounty will nevertheless help resuscitate the Iran threat network—a nefarious web of insurgent, criminal and terrorist allies—and revitalize Iranian meddling worldwide. Iranian sponsorship of terrorist organizations cannot be divorced from the negotiations because the sanctions that will be lifted provide new sources of funding to reinforce the Iran threat network.

The fact that the nuclear agreement does not address the threat network means that Iran remains a serious threat to stability in the Middle East.

Formed in the 1980s, the Iran threat network has expanded from a ragtag militia to an enterprise with global reach—and operatives who are active in dozens of countries. Over the last three decades, Iranian largesse has provided the Shiite group Hezbollah with hundreds of millions of dollars, training, weapons and modern equipment.

The network now includes proxies in Yemen and Iraq, where the Iranian Revolutionary Guards Corps and its elite Quds Force are training sectarian militias. Also of concern are Iranian accomplices including Hamas in Gaza and Hezbollah in Lebanon (and more recently, Syria). Hamas has increasingly relied on financial support from Iran since the Syrian civil war began in 2011.

In addition to Iran's growing battle with Saudi Arabia for regional hegemony, the mullahs that comprise the core leadership of Iran—and are considered the vanguard of the Islamic Revolution—have also pushed to develop a fairly sophisticated cyberwar capability. The Saudi-Iranian rivalry is playing out through the sponsorship of proxies in Yemen and Syria.

Over the past several years, Iran has devoted more resources to cyber warfare, perhaps in response to a destructive software attack—reportedly initiated by the United States and Israel—that effectively targeted Iranian nuclear-enrichment equipment. The Iranians have already penetrated American and Saudi networks and successfully seized and destroyed sensitive data.

Going forward, U.S. policy toward Iran must reflect the nuanced nature of the relationship. While the nuclear agreement is a positive step toward resolving the most serious potential threat posed by the Islamic Republic, the Iranian regime is still a major sponsor of terrorist groups opposed to the United States and its key allies throughout the Middle East, North Africa and the Persian Gulf region.

Designing and implementing a global strategy to address the Iran threat network is essential to stability in the Gulf and will require the exercise of American power to deter Iran while reassuring allies in the region and wider world. Even though the United States welcomes Iran's help combating ISIS, Washington must keep pressuring Tehran to cease its support for terrorist and insurgent groups in Gaza, Lebanon and Yemen.

The United States and its allies must continue to combat the financing of terrorism by working through the Treasury Department and collaborating with private-sector entities to identify and then take action against Iranian funding of terrorist groups. The United States also should keep trying to build partner capacity in at-risk nations like Lebanon and Yemen—thus depriving Iran of the political legitimacy afforded external state sponsors of terrorism—while working to build a force in the region capable of providing at least a modicum of stability. Finally, the United States must continue to closely monitor Iranian behavior to ensure that relief from sanctions does not allow Iran the flexibility to exacerbate conflicts in already fragile nations throughout the Middle East.

After pausing to celebrate the Iran nuclear deal as a “move in a new direction,” the Obama administration should capitalize on it to gain the momentum needed to contain the regional and global ambitions of the Iran threat network.

Colin P. Clarke is an associate political scientist at the nonprofit, nonpartisan RAND Corporation and the author of “Terrorism, Inc.: The Financing of Terrorism, Insurgency and Irregular Warfare” (2015).

This commentary originally appeared on FOX News Channel on July 15, 2015. Commentary gives RAND researchers a platform to convey insights based on their professional expertise and often on their peer-reviewed research and analysis.