Iran Deal Not a Panacea, but a Pragmatic Necessity 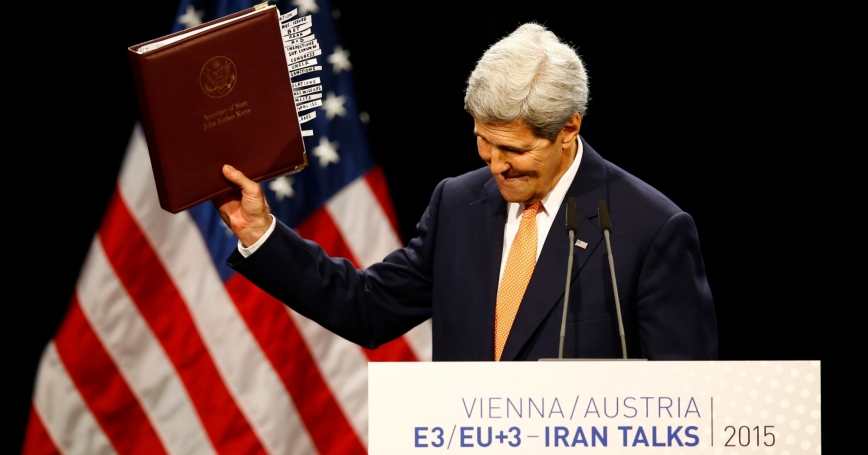 U.S. Secretary of State John Kerry reacts as he delivers a statement on the Iran deal at the Vienna International Center, Austria, July 14, 2015

The nuclear agreement signed between Iran and the P5+1 (United States, Russia, China, United Kingdom, France, Germany) will remain a point of contention in Washington for many years to come. Supporters of the deal claim that it will effectively constrain and roll back Iran's nuclear efforts while providing space for meaningful change in Iran. Critics claim that the deal leaves most of Iran's nuclear infrastructure intact and does not compel the Iranian government to change its regional policies and behavior at home. The nuclear agreement is not perfect and certainly does not attain the ideals of either side. However, on balance, it prevents Iran from developing a nuclear weapons capability in the near future while giving some space for Iranian proponents of change. The nuclear deal is a pragmatic necessity rather than a panacea.

The nuclear agreement, nearly 100 pages, is long on technical details that will be parsed by highly experienced non-proliferation experts. But it has several components that diminish and limit Iran's nuclear capabilities. According to the agreement, Iran has decided to drastically cut back on its number of centrifuges. The Fordow facility, built under a mountain and impervious to most military options, will be turned into a research and science facility, a smart compromise between Iran and the P5+1. The Arak heavy water reactor will be modified so it cannot be used for production of nuclear weapons. And Iran agrees to keep its stockpile of enriched uranium to a minimum. The Iranian nuclear program will also come under the close scrutiny of the International Atomic Energy Agency (IAEA). Critics have claimed that Iran should be subjected to “anytime, anywhere” inspections, but it is completely unrealistic to expect any sovereign country undefeated in war to accept such measures. Iran may object to IAEA requests for inspections, but a majority of the P5+1 can overrule its objections. This is a formula that gives a clear advantage to the United States.

Iran must comply with the agreement before it receives sanctions relief; it will not receive a “signing bonus” for signing the agreement, as critics have claimed. Over time, Iran may repatriate nearly $150 billion of its own funds, which have been "frozen" within the international financial system due to nuclear sanctions. This is a reasonable quid pro quo. Iran rolls back its nuclear program for sanctions relief. President Hassan Rouhani seeks to spend much of this money and any future oil proceeds on Iran's ailing economy; he was elected on a platform of improving living standards for the average Iranian. However, Iran's highly corrupt political establishment, including the Revolutionary Guards, is likely to take its cut of the economic windfall. Some of Iran's sanctions relief may also be spent on Iran's regional activities, although Iran's domestic needs are likely to outweigh expenditures for foreign adventures.

The nuclear deal will not transform Iran. Supreme Leader Ayatollah Ali Khamenei and the Revolutionary Guards will maintain control and attempt to prevent any meaningful changes. Rouhani, while pragmatic enough to sign a nuclear deal, is also cautious enough not to make any sudden moves that could jolt the political system and undermine his own political authority. But millions of Iranians that seek change will be given more space to breath. The 2009 mass Green Movement demonstrated a thirst for change in Iran. Iranians have been waiting for a deal for years, but they, more than anyone, are realistic enough to realize its limitations.

The deal is not perfect. The strongest limitations on Iran's nuclear program will last 10 to 15 years. Iran will be more free to expand its nuclear program after that period, but it will still remain under international inspections. And a deal will not change the Iranian regime or its support for anti-American forces in the Middle East. However, the nuclear deal is a first step for change in Iran. Change may be slow to come, as Iranians have long expected. After all, the 1979 revolution, seemingly sudden and full of promise, transformed Iran forever and for the worse as many Iranians are concerned. So slow changes may be the best option for them. Washington, for now, has come to the same conclusion. Positive change in Iran cannot be achieved through war, sanctions, and unending pressure. It will take incremental steps. The nuclear deal, while not perfect, is a step in the right direction.

This commentary originally appeared on USA Today on July 14, 2015. Commentary gives RAND researchers a platform to convey insights based on their professional expertise and often on their peer-reviewed research and analysis.