It's Time to Reboot Our Relationship with Russia and Iran's Neighbors 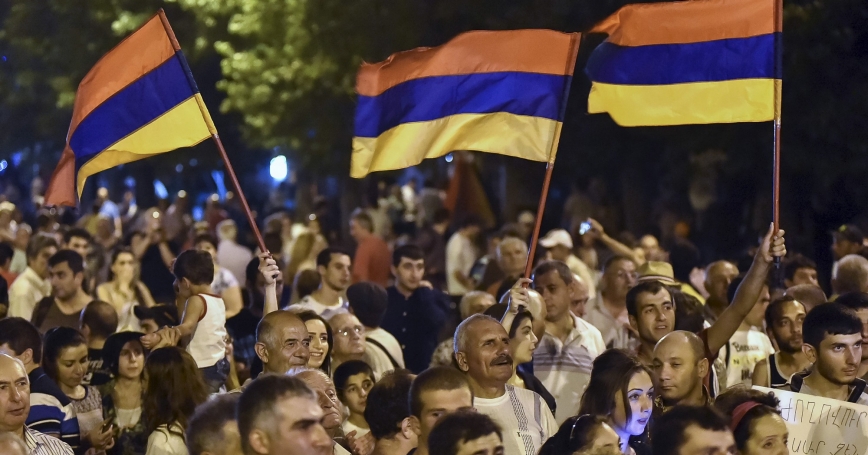 Protesters wave Armenian national flags during a rally against a hike in electricity prices in Yerevan, Armenia July 1, 2015

A prospective lifting of sanctions on Iran may bring economic benefit to its neighbors in the South Caucasus—Armenia, Azerbaijan and Georgia. Yet this cannot offset the region's deep-seated weaknesses, from ethnic tension to government corruption to substantial poverty.

In implementing the prospective Iran nuclear agreement, the West cannot forget its engagement in the vulnerable South Caucasus. The Iran deal changes the equation for all three countries and perhaps opens new opportunities.

Armenia is dependent on Russia and Iran, and uneasy. Last month, street protests broke out, sparked by a proposed hike in the price of electricity sold by a Russian monopoly. Russia also operates the railway system and frustrates Armenia by opposing an Iranian-funded expansion.

In 2013, Moscow pressured a reluctant Armenia to abandon an association agreement with the European Union and join the less wealthy Eurasian Economic Union. Armenia depends on Russian military support to help it deter any potential Azerbaijani steps to regain its territory lost in earlier fighting around Nagorno-Karabakh, a separatist enclave in Azerbaijan populated and controlled by ethnic Armenians. Substantial, albeit declining, remittances from a large diaspora in Russia aid the Armenian economy.

Oppression is expanding in energy-rich but corrupt Azerbaijan. Investigative journalist Khadija Ismayilova and over 90 other activists and journalists are imprisoned. Reacting, West European leaders boycotted the opening ceremony last month of the European Games in Baku.

Azerbaijan's rulers see the Western aim of a values-based partnership as a threat to their power. Gas from Azerbaijan is to feed the EU's ambitious Southern Gas Corridor project, but it faces competition from Russia's proposed but costly TurkStream gas pipeline and potentially from Iran.

Facing Western criticism of its human rights violations, Baku has chosen to rebalance toward Moscow. Huge purchases of Russian arms reinforce this choice. Prospective defense or energy export links with Iran, however, could increase Baku's options.

Georgia is the most liberal state in the South Caucasus. For example, on the World Bank's ease of doing business index, Georgia ranks above Canada, and on the World Justice Institute's rule of law index, above Italy. Direct elections of city officials have bolstered Georgia's democracy, yet it suffers from fractious governance.

With early membership in the North Atlantic Treaty Organization and the EU not in the cards, Georgia's Western orientation is being tested. Trade and travel links with Russia have improved, but diplomatic ties are fraying as Russia pursues creeping annexation of Georgia's separatist regions of Abkhazia and South Ossetia. Two weeks ago, Russian troops in South Ossetia stirred new tension by asserting a border further into Georgia, near its main cross-country roadway and the Baku-Supsa oil pipeline.

The South Caucasians seek more geopolitical pluralism that does not threaten regime survival. They worry about Russia's increasing assertiveness, and the West's hesitancy to help Ukraine defend itself. The South Caucasians are nervous that Washington has seemed to outsource to the EU more of the West's responsibility for Eastern Europe. They hope that China and now perhaps Iran will invest in the region's energy and transport infrastructure.

The prospect of intense contacts ahead with Iran, and challenges from a more assertive Russia, should cause the West to reshape and re-energize its South Caucasus strategy.

The West should do more to connect with Armenia's civil society. Encouraging economic reform is vital for a country with a per capita GDP less than Paraguay's. In the economic and people-to-people dimensions, the EU ought to give fuller expression to Armenia's participation in the Eastern Partnership.

Previously, Azerbaijan's energy resources and strategic location constrained what the West could do to press for human rights and political freedoms. Today's changed situation does not justify ignoring abuses. Until rights are better respected, the EU should put on hold Azerbaijan's participation in the Eastern Partnership. A recent letter from 16 U.S. Senators upped American pressure on Baku.

For two decades the Organization for Security and Cooperation in Europe, through its Minsk Group, has sought to broker peace in the Nagorno-Karabakh conflict, to no evident avail. Baku and Yerevan's failure to engage diplomatically increases risks of renewed war.

The West should revive the Minsk process and intensify informal Track II diplomacy to explore possible solutions. It ought also to urge Turkey to develop a new initiative at rapprochement with Armenia. Ankara's sealing of the border exacerbates Armenia's dependence on Iran.

Visa-free travel for Georgians ought to be an early EU priority. Through the Association Agreement the EU should stimulate reform in Georgia, a country with a per capita GDP even lower than Armenia's. The West could help Georgia deter potential aggression by supplying defensive weaponry.

Throughout a history in which Iran, Russia, and Turkey have competed for influence in the South Caucasus, independence, freedoms, and prosperity have mostly eluded the region. When Tbilisi, Baku and Yerevan pursue these goals, the West should increase support. When this does not happen, transactional relationships are in order, especially regarding the persistent Nagorno-Karabakh conflict.

But at the same time, looking ahead, the South Caucasus will remain vulnerable. The West must follow a more hard-headed, performance-based strategy to help the South Caucasus deal with an uncertain Iran and a more assertive Russia.

Denis Corboy is a visiting senior research fellow at King's College London and was European Union ambassador to Armenia and Georgia. William Courtney is an adjunct senior fellow at the nonprofit, nonpartisan RAND Corporation and a former U.S. ambassador to Georgia and Kazakhstan. Richard Kauzlarich is director of the Center for Energy Science and Policy at George Mason University and was U.S. ambassador to Azerbaijan and Bosnia and Herzegovina.

This commentary originally appeared on Newsweek on July 27, 2015. Commentary gives RAND researchers a platform to convey insights based on their professional expertise and often on their peer-reviewed research and analysis.