Reports of Global Disorder Have Been Greatly Exaggerated 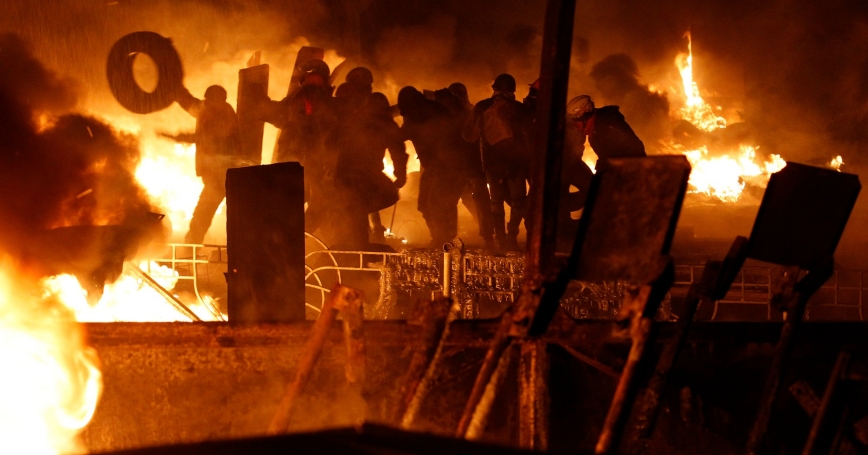 Anti-government protesters at the site of clashes with riot police in Kiev on January 25, 2014

The world is more dangerous than it was a few years ago, and the mounting chaos in the Middle East has fed wider, more exaggerated anxieties. Many observers feel that the pace of technological change is quickening, that the international order is disintegrating, that power is shifting from national governments to individuals and nonstate actors, and that America's capacity to lead is waning.

Oftentimes, however, these portents of disaster and decline are overstated.

Certainly, computers and the Internet are driving rapid change, but the pace is not more rapid or revolutionary than that following the introduction of the steam engine, electricity, radio, telephones, internal combustion engines, airplanes, and the atomic bomb. The Chinese economy has grown compared to the United States, but the United States has, for many years, been growing faster than most of Europe, Russia, and much of East Asia. Russia is misbehaving, but nothing on the scale of the former Soviet Union. The Middle East is in turmoil, but even taking into account the chaos in that region, inter- and intrastate conflicts continue to decline (as revealed in Steven Pinker's The Better Angels of Our Nature), as do the casualties and destruction they produce. States are being challenged by terrorists and insurgent groups in the Middle East, as they once were in Southeast Asia, Latin America, and the Balkans. Twenty years ago this month, Christian insurgents executed in cold blood more than 7,000 Muslim prisoners in Srebrenica, matching in scale and ferocity the horrors perpetrated by the Islamic State today.

Prior eras have seen much greater shifts in the global power balance than those underway today.

It's also true that prior eras have seen much greater shifts in the global power balance than those underway today. World War I brought the collapse of the Ottoman and Austrian empires and the creation of more than a dozen new countries, including nearly all those in the modern Middle East. During the two decades after World War II, control over more than half the world's surface shifted radically, as dozens of “nonstate actors” — then known as liberation movements — seized power and set up new regimes. Change occurred at an even greater speed during the first few years of the George H.W. Bush administration, with the unification of Germany, the disintegration of the Warsaw Pact, and the collapse of the Soviet Union. Most of these earlier geopolitical shifts were favorable to the United States in contrast to current developments in the Arab world. Not surprisingly, people are more likely to notice the pace of change for the worse, as opposed to that for the better. Nevertheless, it would be hard to maintain that the distribution of power among states is changing more quickly today than after 1918, 1945, or 1989.

But are states as a whole losing their grip? Is power devolving to individuals and groups outside officialdom? The continued expansion of international trade, finance, travel, and communications has increased vulnerabilities even as it has widened horizons, increased opportunity, and lifted people around the world out of poverty. Terrorists and criminals can mix with the millions of tourists and business people who cross national boarders every day, but security agencies also have new and more powerful tools to track and impede their movements. Contagious diseases can spread more rapidly, but resources to contain them can also be mobilized more quickly. The communications revolution empowers individuals and states alike. Violent extremists can more easily spread their ideology, recruit followers, and orchestrate attacks, but security authorities can more easily collaborate to foil these attempts. As physical infrastructure becomes more dependent on digital controls, the possibility for catastrophic interference grows, requiring ever higher levels of digital safeguards. There is admittedly a race between the forces of order and disorder in all these domains, but it is not one that effective states are predestined to lose.

Another charge is that the interstate system first formalized by a series of European treaties in 1648, known as the Peace of Westphalia, is unraveling, and power is devolving to corporate, criminal, and sectarian enterprises that operate across national boundaries. But most governments in Europe, East Asia, and the Western Hemisphere have not experienced diminished capacity. Africa has long been home to a number of failed and failing states, but the problems there are no more acute today than at any time since the decolonization of that continent some 60 years ago. What is new and disturbing is the fragility of the Arab states. Several have descended into civil war. The rest are deathly afraid of so doing, leading their governments to take extreme and often ill-considered measures to counter what they regard as the forces of dissolution. Regionwide upheavals of this sort are by no means a new phenomenon. In the 1950s, anti-colonial revolts, usually employing terrorism, created dozens of new countries throughout Africa and Asia. In the 1960s and 1970s, all of Southeast Asia was engulfed in conflict. In the 1980s, Latin America and sub-Saharan Africa experienced multiple civil wars. At the end of the Cold War, the Balkans exploded.

Today, turbulence is a reminder that global peace, order, and prosperity are not products of an invisible hand. They require endless application, particularly by those with the greatest power. The problems the United States faces today are not greater in scale than those it mastered in the past, but doing so in the future will require efforts comparable to those made in the past. Deterring Russia, channeling growing Chinese power, and working with others to dismantle the Islamic State are daunting challenges — but not greater than rebuilding post-World War II Europe, containing the Soviet Union, ending the Cold War, and promoting democratic governance throughout much of the modern world.

This commentary originally appeared on Foreign Policy on July 22, 2015. Commentary gives RAND researchers a platform to convey insights based on their professional expertise and often on their peer-reviewed research and analysis.