What Durban Can Teach Detroit: Getting Customers to Pay Their Water Bills 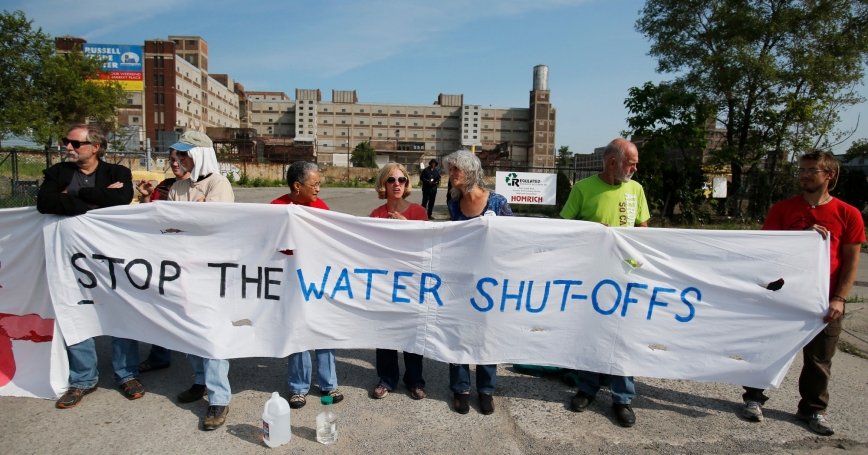 Protestors block trucks at the gate of a private-contractor company hired to shut off the water to residential customers with unpaid bills in Detroit, Michigan

With tens of millions of dollars in overdue water bills, Detroit and Baltimore have shut off water to thousands of customers for non-payment. City officials insist that cutting service—or threatening to—is the only way to get customers to pay their water bills.

While there is evidence that harsh collection measures work as a temporary solution, an award-winning program in South Africa's eThekwini Municipality around Durban suggests that less severe options can have more sustained success. During water shutoffs, customers pay up, but soon fall behind again. In contrast, eThekwini has cultivated a lasting culture of payment and water conservation.

When the Detroit Water and Sewerage Department notified 46,000 customers in May 2014 that their water was going to be shut off, about 60 percent paid their overdue bills. But service was cut off to about 4,530 users, sparking so much protest and international criticism, that service was restored and all shutoffs were halted. Instead, the city established a $4.5 million fund to help troubled customers catch up and keep current with payments, and offered payment plans.

But since these gentler programs have been in place, more customers have been delinquent in payment and 13,000 customers have defaulted on payment plans. Detroit prepared to resume the water shutoffs in May but decided to pursue rate hikes instead. The City Council recently rejected rate hikes and officials are looking for alternatives.

In March, the city of Baltimore warned 25,000 customers that those behind on two payments would lose service and three delinquent payments might cause their homes to be subject to tax sale. By late June, 10,000 of the shutoff notice recipients had either paid in full or entered payment plans, but the gains are likely to be short-lived because people often take desperate financial measures, including high-interest payday loans, to pay the debt and reinstate service.

In contrast, customers who participate in eThekwini Municipality's debt relief program (PDF) sign a contract promising to pay their water bills in full and on time every month. If they do so, their past water debts are written off over 20 months. Missing a payment adds an extra month to the write-off time; missing four cancels the deal and the debt is reinstated. The city does not cut off debtors' water but installs a “flow limiter” restricting the daily household supply to 300 liters, the amount each household is entitled to for free under South African policy.

Customers must attend a 30-minute training session before joining the program. They are taught how to detect and report leaks, save water, and monitor use. They are also encouraged to call a toll-free hotline when they suspect water leaks or anticipate difficulty paying their water bill. Arrangements are sometimes made for alternative payments.

Meanwhile, 20 customer service agents visit households to encourage program enrollment and work with customers who miss payments. A program social worker visits struggling households—many headed by youths or with disabled or ailing members—to help them access available assistance. Five education officers provide program and conservation information, reaching out through schools and churches or by speaking on the radio.

Since the program started a decade ago, almost 50,000 customers have joined, and about 15,000 are currently participating in the plan, according to the project. Roughly $10.7 million in water-user debt has been written off and about $11 million in debt has been collected. Overall water consumption per month has decreased by more than 50 million gallons, largely because of the installation of flow limiters, repairs of leaks, and improved conservation efforts.

The boost in revenues far exceeds the cost of the debt-payment program, which other South African municipalities have since copied.

The program's success was far from assured. South Africa has a deeply ingrained culture of non-payment for services that dates to Apartheid, when citizens often protested through civil disobedience and boycotts. South Africans have also routinely staged violent protests over rate hikes and other debt collection efforts.

The eThekwini model provides a middle ground between draconian shutoffs and blanket write-offs. In Detroit, customers seeking debt help must make a 10 percent down payment on past due balances, then repay the rest in 24 payments while keeping current. If they miss a payment, they are kicked off the plan and can only re-enroll by making a 30 percent down payment on their outstanding balance; a second missed payment requires 50 percent down. These aggressive terms appear to discourage customers and boost default rates.

South Africa is proving that governments in poor cities can provide water and collect payment without turning off the water spigot. Detroit and Baltimore might consider exploring models like this that have been successfully tested in even more challenging settings.

Julia Pollak is an assistant policy analyst at the nonprofit, nonpartisan RAND and a Ph.D. candidate at the Pardee RAND Graduate School. This was written for the Pardee Initiative for Global Human Progress.