20 Years Later, the Lessons of Bosnia-Herzegovina 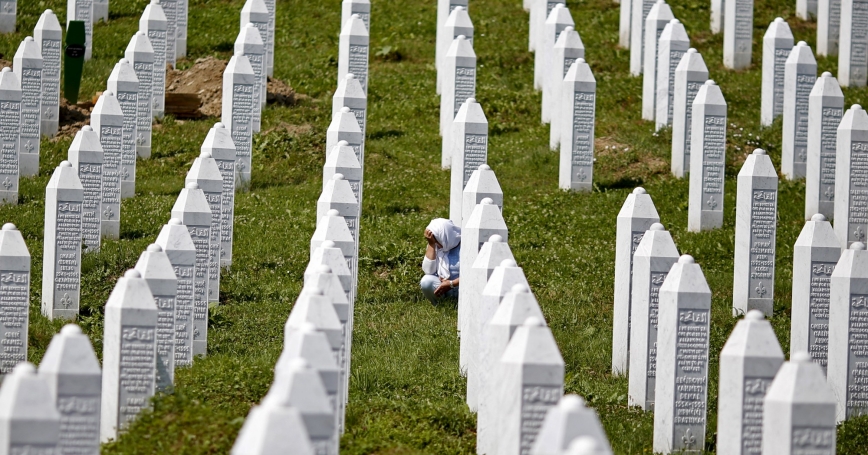 A woman grieves near the grave of a relative who was a victim of the 1995 Srebrenica massacre, at the Potocari Memorial Center and Cemetery, Bosnia and Herzegovina

The French armored personnel carrier carrying a team of American diplomats and French soldiers was traveling on a muddy mountain “road” leading into Sarajevo when tragedy struck: Without warning, the vehicle lurched to the right, and then seemed to teeter for a moment before beginning a deadly series of rollovers. Five of the eight passengers died in that crash 20 years ago this week. I was one of the survivors.

The delegation had been en route to a meeting with the Bosnian president to discuss halting the fighting in Bosnia that had begun in 1992. With one tragic accident, three U.S. peacekeeping envoys, with deep experience in the region, were suddenly gone — Ambassador Robert Frasure, a deputy assistant secretary of state who had been the chief U.S. negotiator for Bosnia; Joseph Kruzel, deputy assistant secretary of defense for European and NATO Affairs; and Air Force Col. Samuel Nelson Drew, director of European Affairs for the National Security Council.

The accident also threatened the efforts of the overall U.S. peace mission; my colleagues who perished had invaluable knowledge of the region and insights into its diplomatic intricacies. Yet the heartbreaking disaster only renewed America's commitment to ending the conflict in Bosnia.

Following the memorial service at Arlington Cemetery, surviving members of the peacekeeping delegation led by Richard Holbrooke, then assistant secretary of state, met with President Clinton and left with a renewed sense of purpose. The president gave unambiguous directions: He was determined to end the fighting and bring the factions together to reach a lasting settlement. Less than six months later, and with a negotiated settlement in-hand, NATO forces entered Bosnia to enforce the peace settlement.

Much has happened in the years since, but much has also remained the same. The fighting has ended — along with the human suffering that accompanies war. The leaders of the three nations of Bosnia, Croatia and Serbia from that era have long since died. The NATO forces that enforced the peace agreement performed admirably and set the stage for a political settlement. Seven democratic elections have been held. Yet in many respects, Bosnia remains frozen in time, making no real progress in achieving one of the major objectives of the NATO intervention — preserving Bosnia as a single multiethnic state. A rotating tripartite presidency — divided between Serb, Croatian and Bosnian political parties — governs Bosnia.

The Inter-Entity Boundary Line, widely known as the IEBL, still provides the demarcation between the federation composed of Muslim and Croat peoples that coexist in a factionalized and often tense equilibrium and the Republica Srpska, where the Serb population lives. The two parts of Bosnia are separated by a 671-mile long border (1,080 km) that essentially marks the confrontation lines that existed at the end of the war. The status of the northern city of Brcko remains undecided — belonging to neither the Federation or the Republica Srpska — just as it was at the signing of the peace agreement known as the Dayton Accords in November 1995. Citizens identify primarily along ethnic lines rather than as Bosnians. The populations do not easily mix, and overt ethnic nationalism continues to be prevalent among political leaders and Bosnians overall.

In considering Bosnia today, several lessons resonate. Stopping the fighting in a conflict is considerably easier than building the institutions that will enable a nation to heal and become one again. For all practical purposes, the peace settlement in Bosnia has reinforced a two-state solution and prospects for erasing the IEBL and seeing a Bosnia united in more than name only are not encouraging.

True peace can only be achieved by the factions involved in a conflict. Military forces sent in to support peace operations (either peace enforcement or peacekeeping) can only set the conditions for peace. All parties must be willing to reach accommodations that ensure peace and heal the nation.

Holding democratic elections, while important to political reconciliation, is necessary but not sufficient to building peaceful, multiethnic societies. In Bosnia, these elections have only served to reinforce divisions; candidates with highly nationalistic beliefs who espouse divisive rhetoric have been elected. Complex election rules that require candidates to define themselves by ethnicity reinforces Bosniak, Croat and Serb nationalism, further preventing Bosnia from developing a true multiethnic identity.

Peace operations are extremely complex endeavors that require coordinated political, military, economic and social elements to come together. Even with this coordination, implementing such operations requires patience, a significant commitment of resources, and a willingness to stay for the long haul. In the best of circumstances, success is not a forgone conclusion. And Bosnia — with a high unemployment rate of almost 27.5 percent, corrupt politicians and a nationalistic undercurrent — certainly cannot be considered to be the ideal model for a successful peace operation.

U.S. intervention in Bosnia ended the fighting and served to contain a conflict that threatened to spill over into broader Europe. It also bought time for a political solution to be reached and halted the humanitarian crisis — more than 100,000 Bosnian Muslim and Croatian civilians had died in the worst act of genocide in Europe since the Holocaust. The intervention also serves to remind us about the divide between what is desirable and what is achievable in a negotiated settlement. Although two decades have passed since the end of the war, the prospects for lasting peace and a true multiethnic society to emerge in Bosnia seem, at best, day-to-day.

One final lesson endures — even the tragedy on the mountain did not shake the U.S. government's resolve to find a diplomatic solution to the conflict.

Daniel M. Gerstein works at the nonprofit, nonpartisan RAND Corporation. He was the undersecretary (acting) and deputy undersecretary in the Science and Technology Directorate of the Department of Homeland Security from 2011 to 2014. He also was a member of the Holbrooke delegation that negotiated the 1995 peace settlement in Bosnia-Herzegovina and later commanded a U.S. Army battalion in Bosnia during NATO peace enforcement operations.

This commentary originally appeared on FOX News Channel on August 19, 2015. Commentary gives RAND researchers a platform to convey insights based on their professional expertise and often on their peer-reviewed research and analysis.