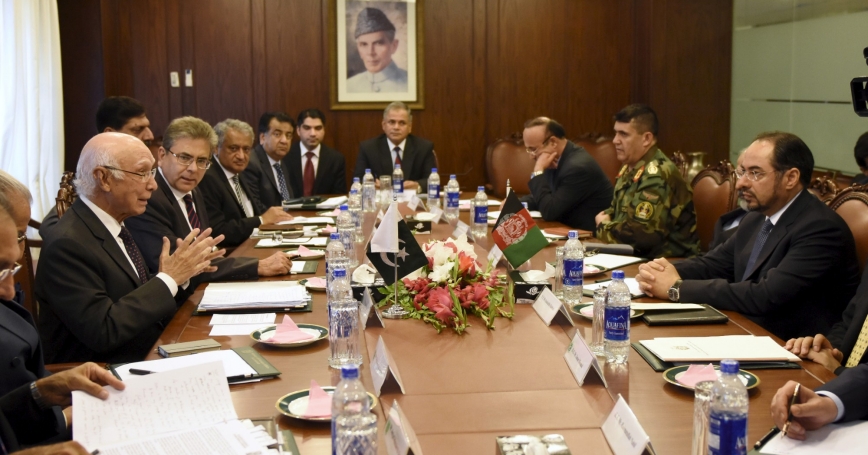 Reverberations have subsided following the confirmed death of long-time Taliban leader Mullah Mohammed Omar, but the dust is far from settled. The succession to Omar's former Deputy Akhtar Mohammed Mansour was relatively smooth (despite tensions among Omar's family members) yet the outlook for Afghanistan is hardly more of the same.

Mullah Omar was more than a force for Taliban unity — he was also declared caliph and served as an important obstacle between Afghanistan and the Islamic State (the Taliban saw Islamic State leader Abu Bakr al-Baghdadi as a “fake caliph”). Indeed, those Afghan militants that already defected to the Islamic State did so because they believed the rumors that Mullah Omar had died.

Omar's death has left new fissures in the historically-unified Taliban movement, so Mansour has little incentive to make conciliatory peace overtures as he struggles to maintain unity. Accordingly, Mansour appears to have stepped back from peace talks and intensified his battlefield efforts, manifesting in escalating violence in Kabul. Tayyab Agha, the chief of the Taliban's political commission and the most prominent moderate in favor of peace talks, has in turn resigned. Meanwhile, al Qaeda chief Ayman al-Zawahiri has declared allegiance to Mansour.

Assessing these developments, U.S. policymakers might now see some choice between promoting further fracturing of the weakened Taliban leadership to enable military gains or pursuing a political settlement with whatever coherence remains within the new Taliban leadership. As demonstrated by the rapid rise of the Islamic State, there is risk in failing to accommodate moderate political opposition when the opportunity affords itself. The Taliban's new leadership, however it emerges from this succession, may be the last decent opportunity for a political solution to the Afghan conflict.

America made its enemy larger after 9/11 by bundling together the Taliban, an internally directed insurgency, with the transnational terrorist group al Qaeda. In Iraq and Syria, the internal insurgency and the external terrorist threat have become one, resulting in a seemingly intractable problem. In Afghanistan, however, the insurgents and terrorists can still be addressed separately. Reconciliation, or bringing the Taliban into the political fold in Afghanistan, is the best way to prevent an Iraq- or Syria-like deterioration of the Afghan state.

The history of peace-making efforts in Afghanistan included missed early opportunities due to the initial U.S. strategy to “defeat” the Taliban, which stood until a 2009 policy review modified the strategy to “transition” security responsibility to Afghan forces and set the conditions for a political settlement. Today, that “transition” is complete but the political process is struggling. However distasteful Taliban norms may be, Afghans by and large support reconciliation as preferable to continued conflict. And reconciliation can address Western interests. For instance, there is good reason to believe that the Taliban would be ready to break with al Qaeda in the course of a political settlement, would come to accept an Islamic Republic (vice an emirate), and settle on participation in a political process of constitutional reform.

Afghan President Ashraf Ghani is right to pressure Pakistan to do more, but the roots of violence in Afghanistan are not so simply a derivative of Pakistan's foreign policies, as many Afghans believe. While Pakistan can and must do a great deal to enable peace talks, its influence to push the Taliban to a political deal will likely remain insufficient. Omar's death may make it harder for Pakistan to claim impotence, but Pakistan will not pressure the Afghan Taliban to the point of creating a new enemy, and U.S. efforts to pressure Pakistan to do so would likely undermine cooperation on other priorities. Moreover, a strong role for Pakistan in enabling talks will be resisted by the Taliban, who resent being perceived as Pakistan's proxy.

Peace in Afghanistan is possible, but it will require a concerted push beyond the region, as much of what concerns the Taliban rests in international hands. The United States, for its part, should clarify its role — it can no longer play the role of both mediator and co-belligerent — and encourage a third-party to step into the mediator role while it focuses on supporting the Afghan government and an Afghan-led peace process. More importantly, the broader international community — led by the United States — should aggressively facilitate restarting talks, to include further appropriate confidence building measures, such as re-opening the Taliban political office in Doha, prisoner exchanges, de-listing Taliban from U.S. and UN sanctions, and enforcing safe passage arrangements and conditional cease-fires.

Despite political interest in “who lost Iraq,” the better policy question is “how was Iraq lost?” Had the government of Iraq done more to accommodate the country's Sunni population, perhaps the Islamic State's incursion would have been more difficult. Similarly, the Assad government could have used political means to head off civil war in Syria, thus preventing the Islamic State from gestating. These are grim reminders that political accommodation can help prevent conflict escalation — lessons that can still be applied to Afghanistan.

Jeff Eggers is a senior fellow at New America, an adjunct senior fellow with the RAND Corporation, and a former Special Assistant to the President for National Security Affairs.

This commentary originally appeared on Foreign Policy on August 24, 2015. Commentary gives RAND researchers a platform to convey insights based on their professional expertise and often on their peer-reviewed research and analysis.