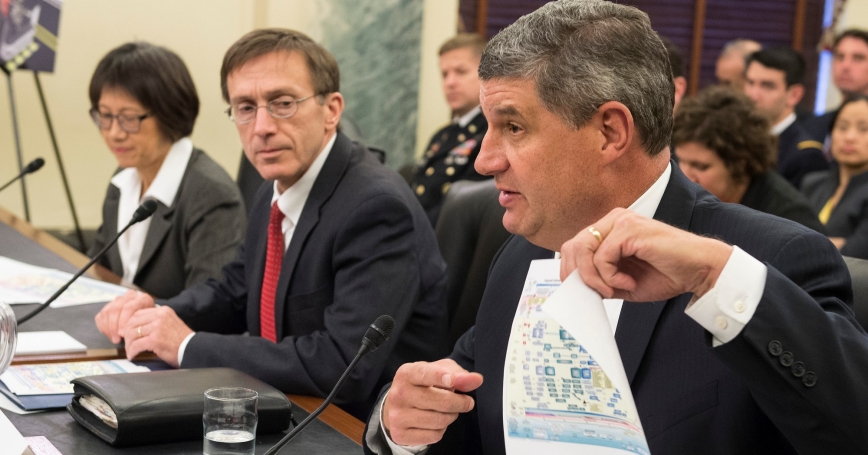 Congress is currently negotiating the final aspects of the 2016 National Defense Authorization Act. Draft policy language, news reports, and statements by members of Congress and other stakeholders clearly show dissatisfaction with Department of Defense acquisition system performance which will likely result in a re-wickering of the process for acquiring new capabilities for American warfighters. The most significant changes would be those proposed by Arizona Sen. John McCain (R) and the Senate Armed Services Committee, which include moving final acquisition milestone decision authority from the Office of the Secretary of Defense to the respective military services.

This proposed change raises many questions. Would moving acquisition authority to the services reduce bureaucracy and give them a greater sense of ownership and responsibility? Would eliminating OSD approval on acquisition decisions result in over-optimism in costs and technical readiness and a lack of priority placed on jointness and interoperability? Here we do not take a position on these issues, but rather we note that these are researchable questions, and analysis can provide important insights as well as identify courses of action to help mitigate perceived risks.

What we know for certain is that moving acquisition authority from OSD to the services would be a significant policy and process change, with potential implications for acquisition organizations as well. The DoD is no stranger to significant changes in their acquisition processes. Prior reform efforts over many decades have included similarly important structural changes, yet have not resulted in significantly better performance of the acquisition system in terms of cost or schedule. However, these reforms have kept steady leadership focus on how to best acquire new capabilities, a focus which has a benefit in its own right. And it's entirely possible that without these changes, and the resulting leadership focus, performance could have been worse.

History indicates that too often acquisition reform has been implemented without providing the full support needed for success. There is broad change management literature that identifies a number of principles for success. While they are reasonably simple to communicate and are well understood across the business community, they can be very difficult to enact. Many changes fail to achieve their objectives, and changes that are inadequately supported are more likely to fail. This could have contributed to the lack of success of previous attempts at acquisition reform.

Three stages are necessary to meet the challenge of successful change: preparing for change, implementing it, and sustaining it. Each of these stages has a number of supporting aspects, which can vary according to the specific chosen approach and environment. And each stage requires time and an understanding of the context and the environment to complete successfully.

The first stage is preparing for change. Fundamental to this is developing a vision for the new approach signaling a strong commitment to the reform, ensuring leadership support, and developing a detailed plan, including how to build support and overcome resistance among those who are vital to implementation. Planning is particularly necessary for current proposed acquisition reform — giving new responsibilities to the services would mean they need additional resources, including personnel and funds. Some of these resources may be shifted from OSD — but this would not be easy or quick, particularly if personnel are required to change locations (from Washington to Dayton, Ohio, for example). The services would need the resources and the time to build up their workforces to ensure they can successfully take on these new responsibilities. Another challenge would be building a consensus on how the change would be implemented, which would require time and effort on the part of senior leaders.

The second stage is implementing change. Typical steps include updating policies, communicating how the change would work, putting in place new organizational structures, empowering leaders, transferring or hiring personnel for new positions, and training them. For proposed DoD acquisition changes, the new policies should include how the services would work together to ensure jointness and interoperability among systems. This may require the development of new organizational structures within the services, meaning that any reductions occurring in OSD could be at least partially offset by new requirements in the services. Recognizing and working through environment challenges such as the ongoing changes among military leadership, exacerbated by expected turnover of senior civilian leadership with the end of the administration would be necessary to ensure successful outcomes.

The final stage — perhaps the most challenging one to do effectively — is sustaining change. This includes providing ongoing support, managing challenges as they arise, and monitoring performance. This stage can be the most challenging because, as leadership priorities move to address other critical issues, they may no longer provide the support and attention needed to ensure success. This is particularly concerning for changes in DoD acquisition as research has shown that successful implementation can take many years. Perhaps the most important aspect of support Congress can provide is the patience to evaluate whether changes have the desired outcomes before making additional refinements.

The bottom line is that if Congress enacts substantial changes to acquisition processes as part of the FY16 NDAA, then it has a responsibility to ensure that DoD has the opportunity and resources to implement proven change management principles to increase the chances for its success.

This commentary originally appeared on The Hill on August 7, 2015. Commentary gives RAND researchers a platform to convey insights based on their professional expertise and often on their peer-reviewed research and analysis.