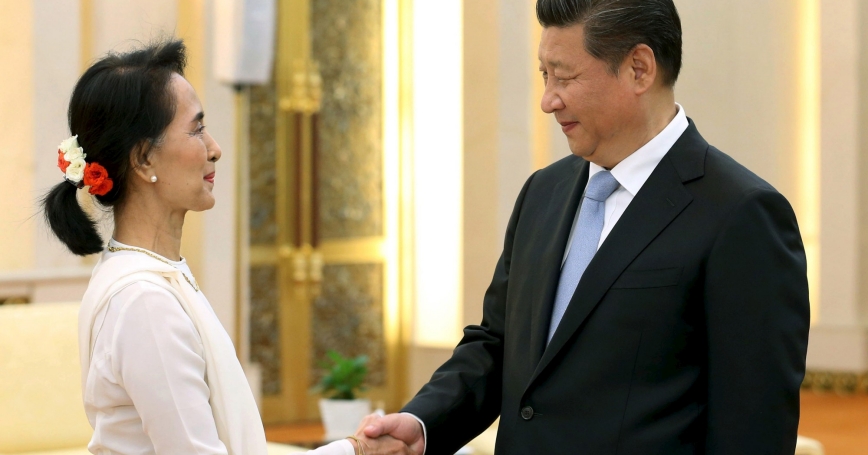 In June 2015, Burmese parliamentarian and opposition party leader Aung San Suu Kyi led a delegation of National League for Democracy (NLD) party members to China.[1] Aung San Suu Kyi (ASSK), the general secretary of the NLD, met with President Xi Jinping and other senior Chinese officials. The trip marked a series of firsts in the Sino-Myanmar relationship: the first visit by the Nobel Peace Prize winner to China since her release from house arrest in November 2010, as well as the first meeting between President Xi and ASSK, both heads of their respective parties, the Chinese Communist Party (CCP) and the NLD. The high-level discussions also reflected the importance of ASSK's trip for both sides. For China, whose relations with Myanmar have become increasingly strained since 2011, ASSK's visit provided an opportunity to engage with a key player in the now-pluralized political landscape prior to Myanmar's upcoming parliamentary elections on November 8th. For ASSK and the rest of the NLD delegation, meeting with Chinese leadership provided a forum for bilateral engagement with one of Myanmar's most important neighbors in the region, relations that will continue, if not expand, if the NLD performs as well as expected in the November elections.

China and India are Myanmar's largest neighbors, and given their long borders with Myanmar (2,129 and 1,468 kilometers respectively[2]), relations with both countries have historically been important for Burmese foreign policy. Following political and economic protests, a military coup, and a crackdown on protestors in 1988, the new Burmese military regime placed Aung San Suu Kyi under house arrest in 1989 and held multi-party elections in 1990, but subsequently ignored the election results. Over the decades, Myanmar became subject to a growing list of sanctions that limited the country's economic interaction with the West and multilateral institutions such as the World Bank and the IMF.

During this period, Myanmar's military regime increasingly looked to China for support and investment. However, Beijing's priorities for the relationship sometimes differed from those of Yunnan Province, a landlocked region in southwestern China that borders Myanmar. For Beijing, Myanmar held strategic importance after the end of the Cold War because of its geographic positioning as a “land bridge” to the Indian Ocean, as well as the opportunities it offered to secure energy resources and expand trade and exports.[3] In practice, however, Yunnan provincial authorities, firms, and individual entrepreneurs carried out much of the day-to-day bilateral relationship, including natural resource extraction, infrastructure investments, trade, and even drug and human trafficking—whether or not Beijing envisioned “Western Development” to include these components.

The Burmese government transitioned from a military- to a civilian-led government in late 2010 and early 2011, though many of the current civilian leaders are former senior military officers; in November 2010, ASSK was also released from house arrest. As this transition occurred, Sino-Myanmar relations began to change as well. Domestically, Burmese citizens had had a growing sense that Chinese investment had caused more harm than good for Myanmar, and protests grew against environmental degradation, unfair compensation for land, and the spiritual pollution of targeted investment areas. Facing public pressure, the Burmese government put the Chinese SOE-led $3.6 billion Myitsone hydropower dam project on hold in September 2011, and in July 2014, announced that a proposed $20 billion railway project connecting Yunnan Province to Rakhine State in western Myanmar was no longer moving forward.[4] Another project currently ongoing that remains controversial is the Letpadaung copper mine, Myanmar's largest copper mining facility that is jointly run by a military-owned company and a Chinese firm.

Ethnic conflict has also continued during this period of political transition in Myanmar, including the Kokang Incident in 2009, in which over 30,000 Burmese refugees fled across the Chinese border to escape fighting.[5] China sees the conflict between the Burmese military and ethnic minority groups as contributing to border instability and hindering economic development in the region, and has assisted in various mediation efforts to halt the violence via cease-fire. However, during two incidents in March 2015, Myanmar Air Force planes accidentally shelled Chinese territory, resulting in the deaths of five Chinese civilians. Although the Burmese government initially denied responsibility for the incidents, it conducted a joint investigation with a Chinese team that resulted in an official apology to China, the firing of a senior-level Burmese Air Force officer, and reportedly paid out settlements for the families of the victims.[6]

Despite these tensions, overall, Sino-Myanmar ties remain fairly strong and Chinese investment is particularly important to Myanmar. In May 2011, China and Myanmar established a “comprehensive strategic cooperative partnership” that included strengthening bilateral relations, promoting high-level exchanges, promoting mutual respect in economic cooperation and trade, and strengthening border security.[7] In November 2014, during a visit to Myanmar, Chinese Premier Li Keqiang signed $7.8 billion worth of deals in a variety of sectors, including energy, infrastructure and finance.[8] An oil pipeline from Rakhine State in Myanmar to Kunming began delivering oil to China in early 2015, despite concerns about the project's impact on local citizens and the environment.[9] China is also working to shape public opinion in Myanmar regarding China. After the Myitsone Dam project was suspended in 2011, China switched out its ambassador and appointed a special envoy for Asian affairs whose portfolio focused on Myanmar.[10] In May 2015, Xinhua rolled out a Burmese language news website called Xinhua Myanmar that state media noted is “the first minor language publication media platform among Xinhua's publications.”[11] There are also at least three “Confucius Classrooms” supported by the Chinese government that teach Chinese language and culture in Myanmar.[12]

Trip Read-Out and Read-Ahead: What's Next

Although a first for her personally in the country, ASSK's visit to China is the culmination of recent party-party exchanges between members of the NLD and the CCP, most recently including a visit by members of the CPC Central Committee's International Department in May 2015.[13] Originally, the NLD had announced that ASSK would head to Beijing in December 2014, but the trip did not occur at that time, possibly due to scheduling difficulties or a miscommunication about confirming details surrounding the December trip.[14]

During her five-day trip, ASSK met with senior officials, including President Xi Jinping, Premier Li Keqiang, and Yang Jiechi, former foreign minister and current State Councilor. Aung San Suu Kyi also met with Wang Jiarui, the Vice Chairman of the Chinese People's Political Consultative Congress (CPPCC) and the chief of the CCP Central Committee's International Department, as well as Shen Yueyue, the Vice Chairperson of the National People's Congress Standing Committee and the president of the All-China Women's Federation.[15] Official coverage of these meetings was relatively brief in Chinese media, with almost no content released of the discussions.[16] In a June 16th interview with the Washington Post after her return to Myanmar, ASSK also declined to disclose any details, stating, “I have to keep explaining that I never discuss details of my conversation with leaders of governments or organizations. These are usually considered private.”[17]

In what coverage was released in Chinese state media, the key themes were outreach to the NLD and broader cooperation in Sino-Myanmar relations over the long term. President Xi told ASSK that, “we hope and believe that the Myanmar side will also maintain a consistent stance on China-Myanmar relationship and be committed to advancing friendly ties, no matter how its domestic situation changes.” He also said that he hoped the visit “will help deepen your understanding on China and the CPC, which will contribute to our mutual understanding and trust, and lay a better foundation for the party-to-party and state-to-state relationship.”[18] An op-ed in Xinhua noted that the CCP “stands ready to engage with any political parties as long as they are willing to promote the sound development of relations with China.” Despite the recent challenges in the relationship, both countries “have the will to keep things going that way. After all, neither side wants to ditch the friendship that has been there for decades in the face of a few challenges.”[19] The op-ed also issued a warning presumably meant for the Burmese military's ears: “China has no intention to interfere in Myanmar's internal affairs, but is determined to protect its citizens from being caught in a war launched from the other side of the border.”[20]

In conclusion, ASSK's trip provided opportunities and benefits for both sides, despite the fact that ASSK's prospects for assuming the presidency in 2015 are slim to none.[21] (On June 25th, the Burmese parliament voted against proposed amendments to the Burmese constitution, one of which would have changed the restrictions on foreign family connections that current bar ASSK from seeking the presidency.[22] On July 11th, however ASSK announced that the NLD would still participate in the November 8th elections.[23]) For ASSK and the rest of the NLD delegation, meeting with the Chinese leadership provided a forum for bilateral engagement with one of Myanmar's most important neighbors in the region, relations that will expand given the NLD's likely success at the polls (it won nearly all of the seats it contested in by-elections in 2012). Aung San Suu Kyi's motivations for reaching out to China as part of her visit would appear to make it unlikely that she pressed the topic of imprisoned fellow Nobel Peace Prize winner Liu Xiaobo during her visit.

For China, the high-level discussions with an opposition party leader, an unusual undertaking for the Chinese government, reflected the importance of ASSK's trip for Beijing. Although there has been negative public reaction to the “politician-ization” of ASSK both in the West and within Myanmar,[24] Beijing values engagement with Aung San Suu Kyi precisely for her political influence. If the NLD performs as well as it is expected to in November, she will play an important role in the selection of the next Burmese president, which occurs through a parliamentary nomination and voting process rather than a general election. With all eyes toward November 8th, Beijing, other international observers, and the Burmese people will be watching to see how Aung San Suu Kyi negotiates the election and its aftermath.

Cristina Garafola is a research assistant and China specialist at the RAND Corporation. She holds an M.A. from the Johns Hopkins School of Advanced International Studies and a certificate from the Hopkins-Nanjing Center for Chinese and American Studies. Garafola has previously worked at the Department of State, the Department of Treasury, and the Freeman Chair in China Studies at the Center for Strategic and International Studies. She is fluent in Mandarin.

This commentary originally appeared on China-US Focus on July 29, 2015. A version of it also appeared in The Diplomat on August 6, 2015.