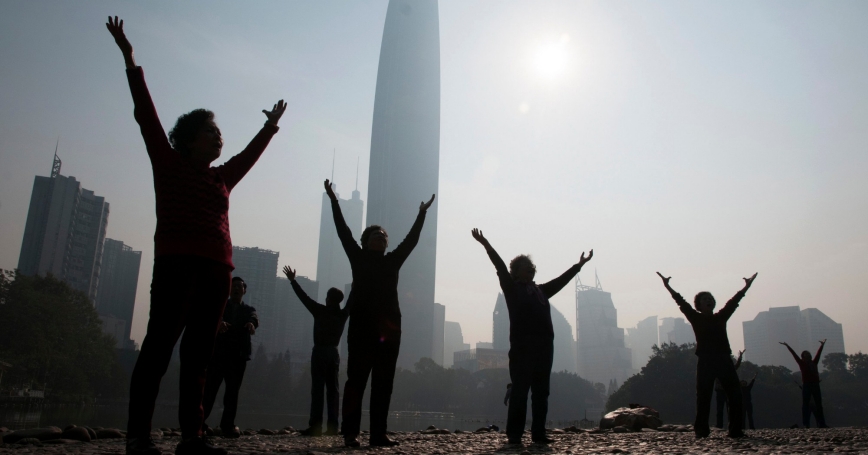 Residents do morning exercises at a park on a hazy day in Shenzhen, Guangdong province February 12, 2015

The relationship between the United States and China is a complex one. Neither close friends nor hostile foes, the United States and China continue to expand trade and other contacts amid increasing exchanges between people, but also in an atmosphere of rivalry and suspicion. At the same time, RAND's body of analysis also is expanding, with studies of China's military modernization, cyber operations, and international behavior alongside analyses that aim to help China's 1.4 billion people live better, healthier lives.

Over the course of the last three decades of unprecedented economic expansion, China's economy has grown to become the second largest in the world, trailing only the United States in GDP. But this growth has been accompanied by a series of daunting domestic challenges—some well known and others less visible—which are critical to China's long-term prosperity and well-being. Increasingly, RAND has been engaging with Chinese organizations and scholars in pursuit of solutions to these challenges.

For example, RAND researchers recently examined China's mounting air quality problem—a challenge that China is laboring to address. Air pollution in virtually every major urban area in China continues to exceed standards recommended by the World Health Organization. Not surprisingly, the negative health effects are substantial. And with ill health also comes declines in productivity—an ironic result for an issue born of China's remarkable economic growth. Our research found that an investment of less than $215 billion annually in existing cleaner energy solutions—an amount that is less than one third of the total annual cost of air pollution in China—could substantially reduce pollution, lessen its drag on productivity, spare the lungs of countless people, and save lives.

Through the RAND Center for Chinese Aging Studies, formed in 2007 to study the issue of China's aging population, RAND researchers have collaborated with Chinese scholars to explore the wide ranging effects of China's demographic trends and policies. The aging center collaborated with the National School of Development of Peking University on the China Health and Retirement Longitudinal Study (CHARLS), which was led by Professor Yaohui Zhao. CHARLS is a national survey of persons in China 45 years of age or older that includes assessments of their social, economic, and health circumstances.

In collaboration with Chinese co-authors, we found that China has taken some steps to address the challenges presented by its aging population, particularly through growth in education and enhanced health care options. Still, we recommended that the Chinese government do more to address the country's growing obesity rate and high smoking rates among men and allow older people to relocate more freely and retain health benefits as they migrate.

We examined the issue of mobility in China. Working with the Institute for Mobility Research based in Germany, we developed future scenarios based on the pace of China's economic growth, constraints imposed on vehicle ownership and use, and environmental conditions. The scenarios were designed to help transportation decisionmakers in both government and the private sector make more informed decisions. Identifying potential opportunities, risks, and contingencies is critical to out-year planning and a more mobile China in the future.

RAND researchers also analyzed what China is doing to transition to an economy driven less by low-skill assembly operations and more by innovation in both the industrial and service sectors. This transition is aimed at restoring higher growth rates, raising per capita incomes, and reducing pollution. We provided recommendations on how China could improve conditions and policies in its economic development zones to foster the growth of high-technology industries.

As China strives to sustain its upward economic trajectory, it must also address these and other domestic problems if its people are to share fully in the rewards of economic development and expansion.