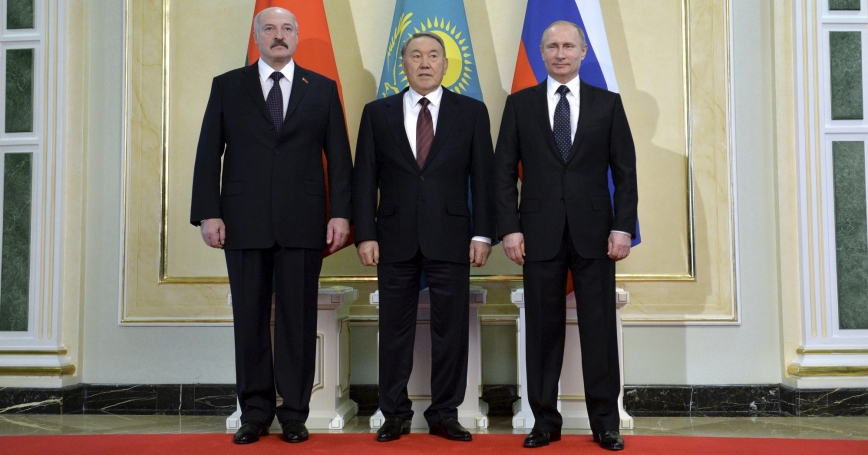 Eurasia, poised between Europe and Asia, is at a crossroads. Russia's new “turn to the East,” the launch of the Moscow-led Eurasian Economic Union, and China's “One Belt, One Road” initiative to fund energy and transport infrastructure are reshaping regional dynamics. But unless Eurasian economies become more competitive, they will continue to lag those in the developed world.

In 1881 Fyodor Dostoevsky said of Russians, “In Europe we were Tatars, whereas in Asia we, too, are Europeans.” Not only Russia straddles continents and civilizations. Ten contiguous states have significant European and Asian traits: Russia, Turkey, Iran, Armenia, Azerbaijan and the post-Soviet states of Central Asia: Kazakhstan, Kyrgyzstan, Tajikistan, Turkmenistan and Uzbekistan. All but Iran have ties with the European Union and NATO. (At present NATO has suspended practical cooperation with Russia.)

All but Iran and Turkey share a long Soviet legacy. All but Armenia have large Muslim populations. All but Turkmenistan belong to or are otherwise affiliated with the Shanghai Cooperation Organization, which expanded its Eurasian reach at a summit in Ufa last month.

Eurasian economies suffer from excesses in state ownership and competition-limiting monopolies, thereby stifling entrepreneurship and innovation. Statist economics correlates with corruption. On the Transparency International index of corruption perceptions for 175 countries, Turkey (number 64) is middling but the others average a dismal 138.

Vested interests will resist, but corruption can be reduced by fairly and transparently privatizing enterprises, breaking up monopolies, and regulating and taxing economic activity rather than owning and managing economic assets.

Past higher oil and gas prices abetted government profligacy and complacency, common among resource-dependent economies. If the private sector could gain more leeway to compete, Eurasian producing states could thrive at $50 per barrel.

In 2012 then-U.S. Secretary of State Hillary Clinton called the Eurasian Customs Union “a move to re-Sovietize the region.” The successor, the Eurasian Economic Union, is touted as a bridge. Serious doubt exists, however, whether Moscow will allow it to become a fair, rules-based entity. With 86 percent of the GDP of the union, Russia seeks to rule it and capriciously politicizes some trade. Land-locked Kazakhstan leads the push for a fairly governed union that speeds trade.

China is an engine of growth for Eurasian economies. It imports via pipeline oil from Kazakhstan and gas from Turkmenistan. Eurasia may gain billions of dollars in investment from the “One Belt, One Road” program and the new Asian Infrastructure Investment Bank, touted by Chinese leader Xi Jinping last May in visits to Astana, Moscow and Minsk.

Yet China's slowing economy and turbulent financial market, and Russia's ebbing finances, will slow or stymie energy mega-projects. Russians now realize that Chinese capital markets do not compensate for diminished access to those in the West.

A lifting of sanctions on Iran will alter Eurasian economics. Iran will compete with Russia and Turkey as an export channel — Kazakhstan and Turkmenistan will ship more energy to and through Iran.

In time increased Iranian supplies of oil and gas will compete against Russian and Caspian energy. Iranians will fan out in Eurasia to develop new markets and supply chains, although some of this will camouflage security purposes.

Western economic ties remain vital for Eurasia. Europe is a rich energy market, but one in which Russia is losing market share through unwise policies. Moscow's push toward economic autarchy, such as forced import substitution, is also costly.

Russia should bear in mind that the European Union is by far its largest trading partner and the source of three-fourths of its foreign direct investment. Western energy companies, although for now paring capital expenditures, are essential to help Eurasians exploit some challenging deposits, as in the Caspian basin, near Sakhalin Island, and the Arctic.

Western sanctions owing to Moscow's intervention in Ukraine harm both targeted and other firms in Russia. Financial markets see higher risks in Russia. Sanctions and Russian economic weakness cause collateral damage to other Eurasians. Thus other Eurasians must pursue risk avoidance strategies, such as improving economic ties beyond Russia.

There is much to be said for Eurasia's rich ethnic, national, religious and cultural diversity.

In the economic sphere, however, Eurasians should reassess bad habits, such as weak property rights, centralized state control and associated corruption.

Only by opening and liberalizing their economies can Eurasians achieve the prosperity they seek. In many places this may not occur unless conditions worsen or the old order is challenged.

William Courtney is an adjunct senior fellow at the nonprofit, nonpartisan RAND Corporation and a former U.S. ambassador to Georgia and Kazakhstan.

This commentary originally appeared on The Moscow Times on August 12, 2015. Commentary gives RAND researchers a platform to convey insights based on their professional expertise and often on their peer-reviewed research and analysis.