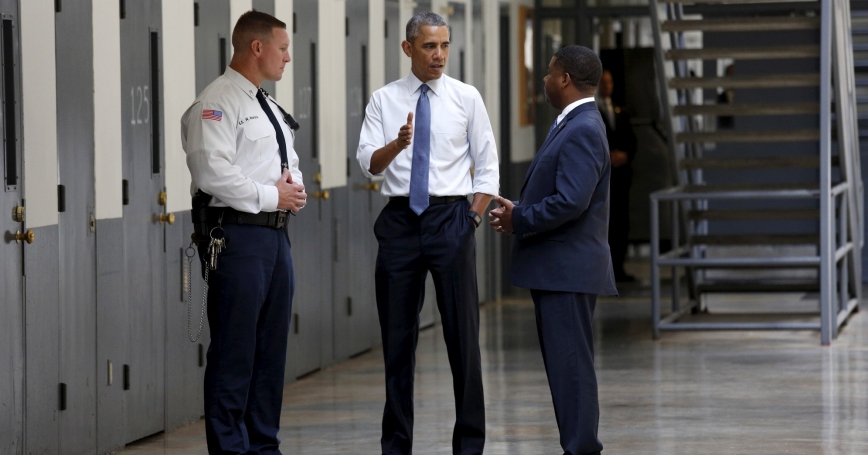 Last month, President Obama commuted more sentences in a single day — 46 — than any other president since Lyndon Johnson. More of these prisoners are in Florida than any other state, with 11 benefiting from the presidential order. As a group, they are being held in 18 states, and all are serving time for largely nonviolent crimes related to drugs. Fourteen had been sentenced to life. This brings to 89 the number of sentences commuted by Obama.

The nation's mandatory minimum sentencing policies enacted in 1984 have contributed to the increase in the number of drug offenders in federal prison, helping to double that population in the last decade. Federal prisons now house more than 207,800 inmates.

One unintended side effect of these sentencing policies on greater society: Incarceration is seen as a problem that cuts across the socioeconomic spectrum, instead of mainly impacting disadvantaged communities, as was the case in the past. Drug offenders in federal prisons have also received much lengthier sentences since the tougher sentencing guidelines were enacted. As part of his effort to reform the federal criminal justice system, Obama noted the lopsided sentences often given to federal drug offenders.

In the personal letter he sent to these individuals, Obama warned that their transition back into the community won't be easy. They would confront many who “doubt people with criminal records can change,” he wrote, then added some encouragement: “But remember that you have the capacity to make good choices.”

When I speak to groups about the promise of prisoner re-entry or correctional education — programs to help those who are re-entering society and who need to rebuild their lives — someone in the audience often comes up to me afterward and almost whispers that they have a son or brother or husband or wife who is incarcerated. Invariably, it's for drug-related offenses. They often say they want to learn more about available programs that could help their family member.

The nation must go beyond encouraging words and find more ways to help ex-offenders as they re-enter society — to help level the playing field. Better assistance is needed as they re-enter society. After the Second Chance Act was passed in 2007, much federal attention has been given to supporting strategies and services designed to reduce recidivism and improve outcomes for people returning from prisons and jails. One area of focus is employment training and services, including such strategies as workforce development, cognitive skills development, transitional job placement programs and job development and coaching.

Other concrete action, such as “ban the box” legislation, has been put in place in more than 100 cities and counties across the country. The legislation prevents potential employers from asking job applicants to check a box if they have a criminal record. The thinking? Employers will focus on a job candidate's qualifications before taking into account an individual's criminal record. Such legislation is promising, and there is a great need to continue to expand it. Supportive employment policies could go a long way toward encouraging employers to give ex-offenders a real chance at rebuilding their lives upon release. Many of these 46 soon-to-be ex-prisoners may serve as a litmus test for just that.

Lois Davis is a senior policy researcher at the nonprofit, nonpartisan RAND Corporation.

This commentary originally appeared in The Tampa Tribune on August 3, 2015. Commentary gives RAND researchers a platform to convey insights based on their professional expertise and often on their peer-reviewed research and analysis.