One State Over the Status Quo 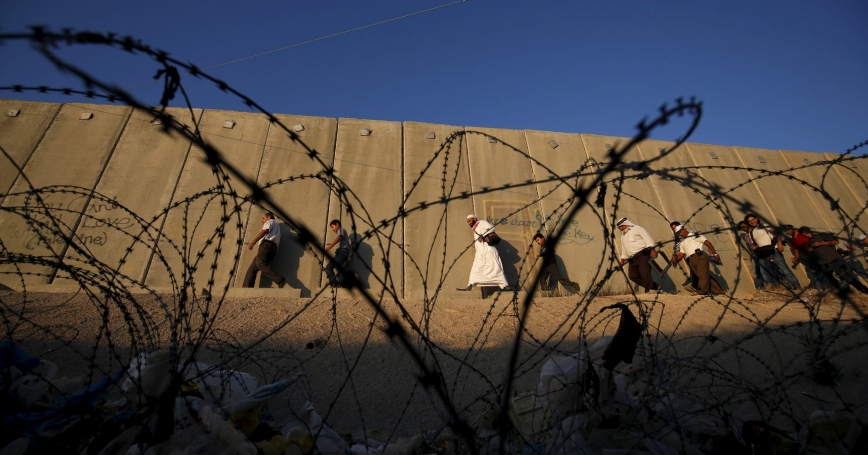 Palestinians walk past Israel's controversial barrier on their way to attend the fourth Friday prayer of Ramadan in Jerusalem's al-Aqsa mosque, at Qalandia checkpoint near the West Bank city of Ramallah July 10, 2015

There are, theoretically at least, three alternative outcomes to any Israeli-Palestinian peace process: a two-state solution, a one-state solution or the present situation, which is to say no solution. So far most Palestinians (and other Arab governments) and Israelis have preferred the status quo to any alternative outcome that the other side would accept. Moderate Arabs and Israelis support, in principle, a Jewish state and an Arab state living side by side in the former Mandate of Palestine. There are elements on both sides that favor a one-state solution, covering all or most of historic Palestine, although they obviously differ on exactly how that resultant state would be formulated and how Arabs or Jews would share power within it.

The next U.S. administration may choose to continue expressing support for the two-state solution and even seeking to mediate negotiations toward that end, while leaving it to the parties to define a mutually acceptable outcome. This approach has been tried for 40 years without success. The probable failure of another such effort will be extension of the status quo — that is, the Israeli occupation of the West Bank and blockade of Gaza, the continued expansion of Israeli settlements in occupied territories, and limited autonomy for Palestinian authorities within non-contiguous areas not populated or fully controlled by Israelis.

To be sure, this approach enjoys bipartisan support in the United States and Israel, and quiet acquiescence by most Arab governments. It allows the Israelis to postpone the difficult choice between the democratic and Jewish character of their state. However, perpetuation of the status quo also promotes continued resistance and instability among Palestinians, results in Israeli military incursions into Gaza and the West Bank, feeds the radical narrative throughout the rest of the Middle East, and will likely make Israel even more dependent on U.S. support in the United Nations and other forums as it continues to lose sympathy in Europe and around the world. Population growth among Palestinian residents of the West Bank and Gaza, and Arab citizens of Israel, is faster than that of Jewish citizens of Israel. Under all these pressures, the status quo will not in fact be static and may not be sustainable.

A recent RAND study estimated the economic costs and benefits of present trends, relative to five possible alternative futures. It found that over a decade with a two state solution, Israel's gross domestic product would be $123 billion (5 percent) larger than it would otherwise be, and that the Palestinian economy of the West Bank and Gaza would be $50 billion (49 percent) larger. On the other hand, the study estimated an all-too-possible violent uprising could cost Israeli GDP some $250 billion (10 percent) and the West Bank and Gaza $46 billion (46 percent). Even an expansion and perpetuation of the "boycott, divesture and sanctions" movement, as well as other means of non-violent resistance, could cost the Israeli economy $80 billion (3.4 percent) of GDP over a decade. Some consider that present circumstances are already trending towards a non-violent resistance scenario.

In response, the next administration might seek to take efforts to secure a two-state outcome to a new level. It might itself lay out the parameters of an equitable peace settlement and have them endorsed by the United Nations Security Council. It might cease vetoing resolutions of the Security Council that are fully consistent with U.S. policy but opposed by Israel. It might reduce levels of economic support for Israel, including financing of its military purchases. At the same time, the United States could seek European and Arab government support in putting comparable pressures on the Palestinian side. Such steps would be applauded internationally and regionally, but would provoke strong domestic resistance in the United States and even more so in Israel.

A third alternative, worth more serious consideration than any U.S. administration has ever given it, is the one-state solution. Admittedly, hard as it is to envisage a two-state outcome that both sides could accept, it is even harder to imagine how the existing populations of Israel, the West Bank and Gaza could live together in one state. Many Palestinian proponents of such a solution assume the return of Palestinian refugees from abroad, and a consequently large Arab majority in such a state. Many Israeli advocates of "Greater Israel" assume the opposite, that continued Jewish immigration would be encouraged and any significant Arab immigration forbidden.

It is possible to imagine formulas that would preserve the current ethnic balance in the combined territory and the sharing of power in a federation of states that could preserve both the Jewish character of present Israel as well as the Palestinian character of the West Bank and Gaza. But it is hard to imagine either side being satisfied with the constitutional compromises that would have to be made in such an arrangement.

Nevertheless, if the next administration were to conclude that perpetuating the status quo for another eight years was unacceptable or unachievable, it might begin speaking of the one-state solution not as its preferred outcome, but as one more acceptable than no solution at all. As a practical matter, this would mean taking Prime Minister Benjamin Netanyahu's rejection of a two-state solution at face value and beginning instead to press for democratic civil and political rights for the Palestinian population of the West Bank and Gaza on a par with those of Israelis. U.S. policymakers could explore application of constitutional principles of confederalism — such as those adopted in Northern Ireland or considered in Cyprus — to the Middle East peace context.

Beginning to talk seriously and positively about a one-state solution could prove a more effective way of securing Israeli acceptance of a two-state solution than the mild and to date entirely ineffective pressures the United States and others have brought to bear in favor of that outcome.

This commentary originally appeared on U.S. News & World Report on August 18, 2015. Commentary gives RAND researchers a platform to convey insights based on their professional expertise and often on their peer-reviewed research and analysis.