Opening Iran After the Nuclear Deal 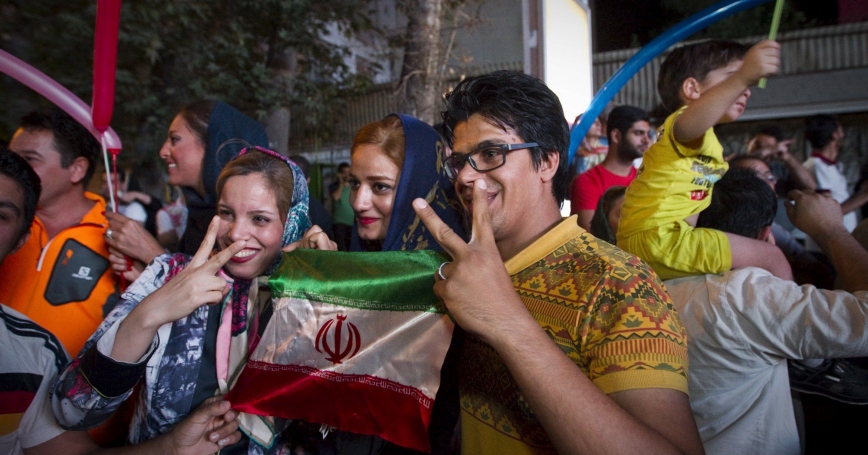 Iranians celebrate after the announcement of a nuclear deal between Iran and the P5+1 countries, Tehran, July 14, 2015

by Alireza Nader and Morad Ghorban

Millions of Iranians celebrated the recently reached nuclear agreement. For them, it presented a path out of Iran's long isolation, and a possible escape from years of crushing sanctions. Many Iranian-Americans, haunted by fears of conflict between their adopted country and nation of origin, were also elated to see the long-waited nuclear breakthrough.

The results of a 2015 Public Opinion Survey commissioned by the Public Affairs Alliance of Iranian-Americans showed that nearly two-thirds of Iranian-Americans approved of the P5+1 (United States, Russia, China, United Kingdom, France, Germany) framework agreement while 20 percent disapproved. The vast majority of Iranian-Americans have maintained close ties to family members in Iran. They want to see an Iran that is pluralistic and democratic and are hopeful that — in the wake of an agreement — the social and economic situation will improve for the people of Iran.

While the nuclear accord will not change Iran immediately, it will allow for incremental changes in the country. It offers an opportunity for economic growth to loosen the security-dominated atmosphere in Iranian society. And it opens opportunities for greater people-to-people exchanges between Iran and the United States. Ultimately Iran's gradual opening will allow what the Iranian regime fears the most; the loss of the United States as an enemy and its emergence as a source of inspiration.

As Congress deliberates on whether or not to accept the nuclear deal with Iran, lawmakers would be wise to also keep in mind how a rejection of the deal would impact the democratic aspirations of the Iranian people.

The sanctions relief accorded to Iran as a result of the nuclear accord will, among other things, no doubt line the pockets of the Iranian regime. But, at the same time, Iran is a relatively young and enterprising nation. It has one of the most promising start-up scenes in the Middle East and nearly a third, if not more, of its population has access to the Internet and a high rate of social media and telecommunications use, despite the government's attempts at censorship.

Iran's economic opening to the world could fuel social and even political change over time. Most young Iranians have little memory of the 1979 Iranian revolution or Iran's long war with Iraq (1980-88), both events that have heavily shaped negative perceptions of the United States. Rather, most of Iran's post-revolutionary generation views the United States as a technological powerhouse and a land of personal opportunity. This doesn't mean that they agree with Washington's policies toward the Middle East; and it doesn't mean that Iran's youth culture and American norms are neatly in sync. Rather, there is enough convergence between Iranian and American societal ideals to impact future political relations. Iran's reactionary Ayatollahs will not be at the forefront of change; but the revolutionary class that has sustained enmity toward America cannot live forever.

The nuclear agreement and better U.S.-Iran relations will provide a unique opportunity for policy makers to increase people-to-people communications and exchanges between the two nations. The U.S. trade embargo to Iran does not prohibit exports of certain telecommunication software and hardware. Policymakers should continue to encourage access to communication tools for the people of Iran and establish a mechanism for their payment through direct banking links with Iran. Such a channel could also be used to enhance the flow of food and medicine to Iran, as well as facilitate personal and family remittances in a manner that is more transparent and safe.

The lessons derived from the Cold War suggest that more assets should be dedicated to cultural and educational exchanges. There is no doubt about the important role U.S. cultural diplomacy played in improving relations with Eastern Europe countries and in helping end the Cold War. Such exchanges with Iran will uphold positive features of American society and help cultivate Iranian goodwill toward America.

The United States could also enhance efforts to attract young Iranians to come and study in American universities by expanding the number of students who are eligible for multi-entry visas. As the potential future leaders and innovators of Iran, it is of particular importance that Iranian students are allowed to study and return to Iran with a healthy appreciation of American culture and values.

Iranian-Americans are not naïve enough to believe that the nuclear agreement will transform Iran instantaneously. Most will never forget the hardships of the post-revolutionary era. For them, the debate about Iran is not merely one of policy, but something deeply personal in nature. However, the nuclear accord does present a chance for better U.S.-Iran relations. Even while the two states may remain rivals, at least future generations of Iranians could have a more positive image of America. Iranian-Americans have by and large found success in their adopted country. The nuclear accord paves the way for them to help the people of Iran know the United States not for past perceived misdeeds, but future possibilities.

Nader is a senior international policy analyst at the nonprofit, nonpartisan RAND Corporation. Ghorban is director of Government Affairs and Policy for the Public Affairs Alliance of Iranian-Americans (PAAIA).

This commentary originally appeared on The Hill on July 31, 2015. Commentary gives RAND researchers a platform to convey insights based on their professional expertise and often on their peer-reviewed research and analysis.