Out of the Mushroom Cloud's Shadow 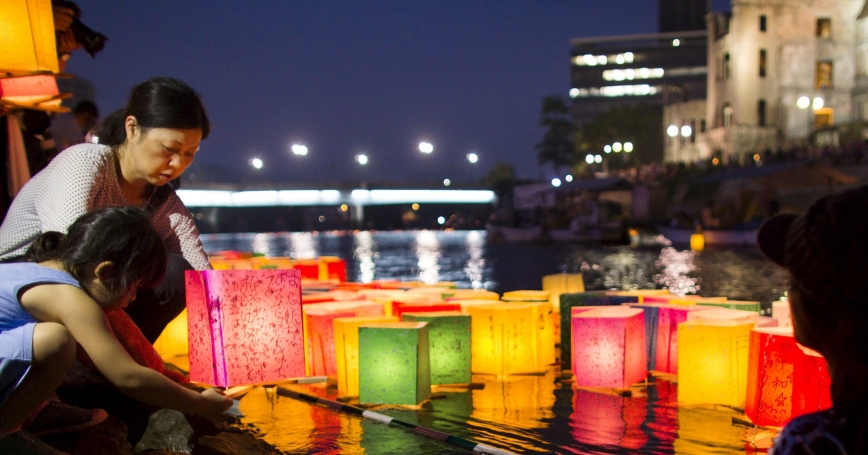 A woman and child release lanterns into the Motoyasu River on the 70th anniversary of the bombing of Hiroshima, Japan, August 6, 2015

Sumiteru Taniguchi was 16 when he witnessed what a nuclear weapon could do to a person. He was delivering mail from his bicycle in the city of Nagasaki when the atom bomb burst just over a mile away on the morning of Aug. 9, 1945. The blast threw him and his bike 15 feet while an otherworldly heat melted the skin off his left arm and back. He awoke the next morning amid a field of corpses; it was three days before rescuers realized that he wasn't one of them. For the next several years, he lay prostrate on hospital beds, often pleading with doctors to end his life. Now a frail 86-year-old who suffers from recurrent tumors on his back, he has spent the last 55 years campaigning for nuclear abolition, often with other hibakusha — survivors of the bombings. He traveled from Nagasaki to New York in April to share his story ahead of the Review Conference for the Nuclear Nonproliferation Treaty, or NPT, where representatives from the 188 signatory nations met to discuss the current state of global nuclear affairs. Given his precarious health, it is doubtful that he will return when the conference next meets in 2020.

The U.S. explosions that devastated Hiroshima and, three days later, the city of Nagasaki, seared an aversion to nuclear weapons into the Japanese psyche, embodied by people like Sumiteru Taniguchi. But although Japan never developed nuclear weapons, this aversion has not kept Japan out of the business of nuclear weapons altogether: Its advanced civilian nuclear program helped it recruit the United States and its nuclear deterrent as its guardians in the 1960s and 1970s.

With the average age of the hibakusha now over 80, and Japanese society gradually leaving its pacifist and anti-nuclear roots behind, however, the security alliance with the United States and the nuclear umbrella that it affords are increasingly crucial backstops for Japan's commitments to nonproliferation and disarmament. Without them, a nuclear arms race could ensue in East Asia.

If Japan pursued nuclear weapons, it would upend efforts to restrict their spread, especially in East Asia. With the largest nuclear program of any state outside the 9-member nuclear club, Japan has long been a poster child for nonproliferation. Besides its NPT membership, it accepts the safeguards of the International Atomic Energy Agency — the global nuclear watchdog — on activities ranging from uranium imports to plutonium reprocessing. In 1998, it was the first to sign up for the IAEA's voluntary Additional Protocol, which mandated even more comprehensive and onerous inspections after the first Gulf War. The Japanese Ministry of Foreign Affairs touts nuclear disarmament, and officials of its Arms Control and Disarmament Division toil abroad in support of international efforts to manage and eventually eliminate weapons of mass destruction.

These attitudes and behaviors are often ascribed to the bombs' enduring impact on Japanese culture and politics. An estimated 66,000 people were killed and 69,000 injured in Hiroshima, and another 39,000 and 25,000 in Nagasaki — in all, 250,000 to 300,000 died within 13 years. During the 7-year U.S. occupation of Japan, U.S. authorities censored accounts of the bombings and its radioactive aftereffects on the cities' populations. Anti-nuclear sentiment flared again after an American H-bomb test went awry in 1954, contaminating 7000 square miles of the South Pacific and irradiating 23 crew members of a Japanese fishing vessel — the Lucky Dragon — one of whom later died from radiation poisoning. The incident gave rise to public outcry and anti-nuclear protests in Japan and was featured in the godfather of all monster movies — Godzilla. One year later, Japan's parliament, the Diet, restricted domestic nuclear activities to those with civilian uses, a norm which Prime Minister Eisaku Sato further reinforced in 1967, when he introduced his Three Non-Nuclear Principles: non-possession, non-manufacture, and non-introduction of nuclear weapons.

Yet Japanese leaders' renunciation of nuclear weapons has never been absolute. In private remarks, many of Japan's prime ministers in the 1950s and 1960s asserted that the weapons would enhance their country's national security and international standing. (This was partly a mark of the era, when President Dwight Eisenhower insisted that he saw “no reason why [nuclear weapons] shouldn't be used just exactly as you would use a bullet or anything else.”) After China's first nuclear test in 1964, Sato informed U.S. President Lyndon Johnson “that if the [Chinese] had nuclear weapons, the Japanese also should have them.” He later confided to the U.S. ambassador to Japan U. Alexis Johnson that the Three Non-Nuclear Principles were “nonsense.”

Why then did Japan not build atomic bombs in the 1960s? Mainly because the United States offered to share its own. Security treaties signed in 1952 and 1960 granted the U.S. military basing rights in exchange for protecting Japan. Those treaties were silent on nuclear threats, however, so after China's nuclear test, Johnson and his foreign-policy team devised various schemes to make U.S. atom and hydrogen bombs available to Japan amid a crisis. In January 1965, Johnson inaugurated a tradition of American presidents vowing to Japanese prime ministers, “if Japan needs our nuclear deterrent for its defense, the United States would stand by its commitments and provide that defense.”

These reassurances seemed to have their intended effect. In 1967, Sato acknowledged the importance of extended nuclear deterrence in a meeting with Secretary of State Dean Rusk and Secretary of Defense Robert McNamara: “The Japanese were well-protected by the U.S. nuclear umbrella, and Japan had no intention to make nuclear weapons,” he told them. Afterward, Sato announced that extended nuclear deterrence also formed a pillar of Japan's nuclear posture. When Sato's former Foreign Minister Takeo Miki became prime minister in 1974, he convinced the Diet to ratify Japan's acceptance of the NPT, thanks to President Gerald Ford's reaffirmation that the U.S.-Japan security treaty encompassed nuclear threats and the establishment of the Subcommittee on U.S.-Japan Defense Cooperation, where the two countries' foreign and defense ministers would thereafter meet to coordinate their common defense.

Optimists claim that nuclear aversion, political checks (PDF), and international commitments will prevent a Japanese nuclear breakout in the future. After all, Foreign Minister Fumio Kishida — who hails from Hiroshima — renewed calls to “accelerate nuclear disarmament” at the NPT Review Conference this April, inviting world leaders to visit Hiroshima and Nagasaki in order to “witness with their own eyes the reality of atomic bombings.”

And yet, Japan is becoming increasingly ambivalent about its military restraint. Before his speech in New York, Kishida finalized new arrangements with the United States that encourage Japan to function “more proactively” in East Asia. Prime Minister Shinzo Abe is brushing aside widespread public resistance to a Diet resolution that would authorize the Japanese Self-Defense Forces to operate overseas for the first time since World War II. During his first administration, in the wake of the first North Korean nuclear test in 2006, Abe declared that a limited nuclear arsenal “would not necessarily violate” the pacifist constitution. Tokyo affirmed its non-nuclear status in 2006, but with North Korea testing medium-range ballistic missiles, and China enhancing its conventional and nuclear forces amid the contest of wills over the disputed Senkaku/Diaoyu Islands, another review seems inevitable. In 2011, Shintaro Ishihara, the then powerful governor of Tokyo, even called for Japan to build its own nuclear arsenal.

A key variable will be how Seoul reacts to Pyongyang's provocations. South Korea is even more exposed to North Korean threats, and possesses an advanced civilian nuclear program of its own. If it took the radical step of nuclearizing, Japan would likely follow. And if Tokyo invoked North Korea's nuclear arsenal to withdraw from the NPT, which has a 90-day waiting period, it could build its own in short order. It has a growing defense industry recently freed from export restrictions, mastery over missile technology thanks to its space program, and a reprocessing facility capable of producing enough weapons-useable plutonium to fuel more than 1000 bombs like the one that leveled Nagasaki. Indeed, if Japan wanted to, it could probably develop basic explosives in less than a year and a sophisticated arsenal in three to five years. Faced with an existential crisis, however, those numbers would plummet, as Tokyo fast-tracked a national undertaking.

For all of these reasons, Washington needs Tokyo to play a more active role in regional security. The bilateral Extended Deterrence Dialogue formalized mid-level consultations in 2010; the meetings should expand to include South Korea — trilateral coordination is overdue. The United States should continue urging Japan to invest more on conventional forces. For decades, Japanese military spending has hovered around 1 percent of gross domestic product. Even a half-percent increase would help offset smaller U.S. defense budgets, reducing scenarios where U.S. nuclear forces would have to be called on and increasing the credibility of U.S. deterrent threats in East Asia as a result.

Hibakusha have educated Japan and humanity about the lifelong harm that nuclear weapons can inflict. Their advancing age is representative of the generational changes facing Japan, however, with profound implications for its foreign policies. As Japan assumes a more active security role in East Asia, it may be tempted to rethink its nuclear options. With some experts promoting “tailored” proliferation to U.S. allies to counter China's rise, U.S.-Japanese efforts to reduce nuclear risks regionally and worldwide appear increasingly in jeopardy.

The shadow of American power still looms over Japan 70 years after two artificial suns rose over Hiroshima and Nagasaki. The nuclear partnership with Washington has afforded Tokyo the security necessary to renounce nuclear weapons and champion a world without them. With Japan's nuclear restraint no longer the article of faith it once was, the significance of the nuclear pacts struck decades ago will become ever more consequential.

This commentary originally appeared on Foreign Policy on August 5, 2015. Commentary gives RAND researchers a platform to convey insights based on their professional expertise and often on their peer-reviewed research and analysis.