When the School Bell Tolls Too Early 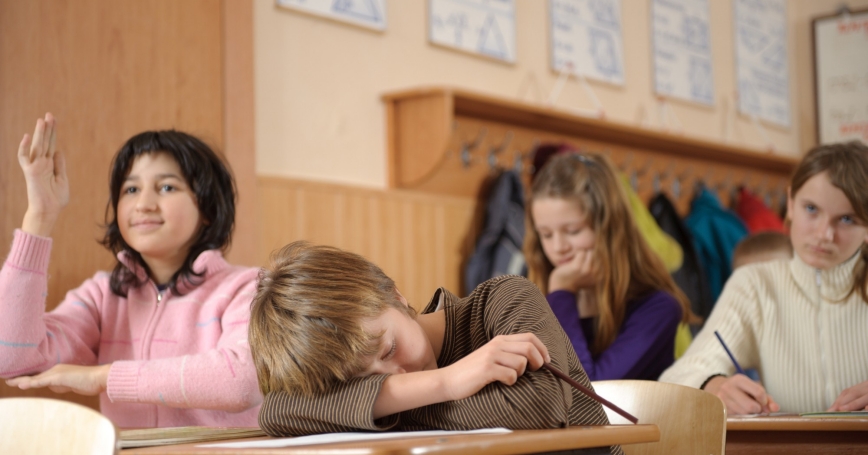 A chill is in the morning air, “back to school” ads are everywhere, and summer activities are winding down. It can mean only one thing—it's nearly time for students to surrender the sweet freedom of summertime for the structured schedules of the school year. Children are bemoaning the return of early morning alarms and evening homework burdens, but these things should not be allowed to encroach upon their critical nightly slumber.

The Centers for Disease Control says sleep deprivation is a public health epidemic, particularly among children and adolescents. The consequences of sleep deprivation are well documented, including poor academic functioning, as well as increased risk for mental and physical health problems and motor vehicle accidents. As a sleep specialist, I know how important a good night's sleep is. And as a mother of two, including a son who will be entering Treasure Mountain Junior High, where school starts at 7:30 a.m., I am also aware of the sleep-defying stresses school schedules can bring. Here are some strategies to help your family get “sleep-ready” for the school year.

Abruptly shifting your child's sleep schedule the night before school starts is a bit like trying to instantaneously overcome jetlag. As summer winds down, start gradually encouraging (forcing) your child to wake up within an hour or two of their required wake-up time during the school year. Each week, make the wake-up time closer and closer to the actual wake-up time for the first day of school. At the same time, start curtailing evening activities to make it easier for your child to adjust.

Remove Technology from Your Child's Bedroom

Technology can disrupt sleep with stimulating content and interruptions from incoming texts or alerts. The light emitted from phones, tablets and other devices can directly suppress the hormone, melatonin, which signals the onset of sleep. This can be particularly harmful for teenagers, given that their internal biological clocks are already programmed to stay up later and wake up later. Maintain a central place outside of the bedrooms where the family charges their devices overnight. Your kids are watching you—so be a good role model.

The truth is there is only so much parents can do to ensure their children get adequate opportunity for sleep, particularly when junior high and high school start times are in direct conflict with teens' biological clocks. There is robust evidence that early school start times result in chronically sleep-deprived students. Changing to later start times certainly presents challenges, but over the past 15 years, an increasing number of school districts have responded to the evidence put forth by sleep scientists and pediatricians and have made the choice to overcome these hurdles to start the school day a little later.

The American Academy of Pediatrics recently stated that it “strongly supports the efforts of school districts to optimize sleep in students and urges high schools and middle schools to aim for start times that allow students the opportunity to achieve optimal levels of sleep (8.5-9.5 hours) and to improve physical (e.g., reduced obesity risk) and mental (e.g., lower rates of depression) health, safety (e.g., drowsy driving crashes), academic performance, and quality of life.” It may be too late to make the change this year, but it is not too late to mobilize efforts to delay junior high and high school start times for next year.

Wendy Troxel is a behavioral and social scientist at the nonprofit, nonpartisan RAND Corporation and a certified behavioral sleep medicine specialist.

This commentary originally appeared in The Park Record on August 7, 2015. Commentary gives RAND researchers a platform to convey insights based on their professional expertise and often on their peer-reviewed research and analysis.