Any Review of Syria and Iraq Strategy Needs Realistic Reappraisal 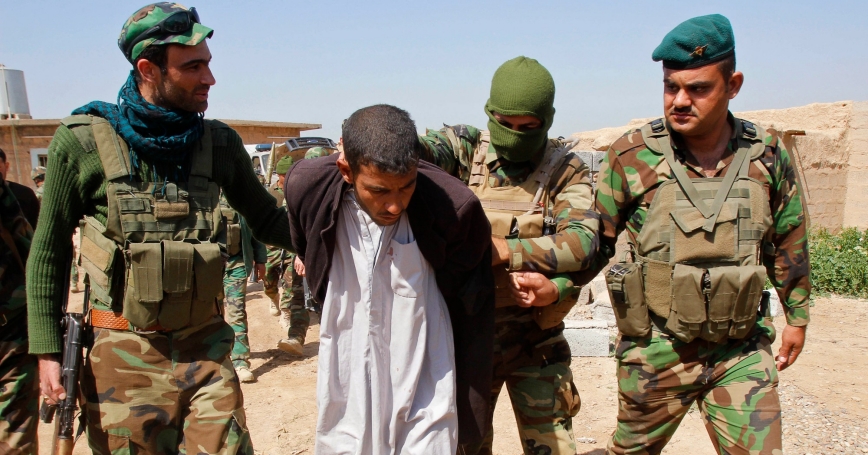 Members of the Kurdish peshmerga forces detain a man suspected of having links to the Islamic State, on the outskirts of Kirkuk March 15, 2015

As the fighting continues and refugees flood Europe, many in Washington are calling for a fundamental review of U.S. strategy in Syria and Iraq. That must begin with a realistic appreciation of the situation.

The continued fighting has seen the diminishing strength of Syria's secular rebels and the ascent of its most extreme jihadist component, represented by the Islamic State in Iraq and Syria (ISIS). Since the American-led coalition bombing campaign began a year ago, ISIS has suffered some military setbacks and lost territory, but it also has been able to capture several more key cities in Iraq and Syria, and, despite the bombing, continues to attract a large number of foreign fighters. The threat they pose — along with ISIS's continued exhortations to supporters abroad to carry out terrorist attacks — has security officials in Europe and America on edge.

The conflicts in Syria and Iraq seem to be at a stalemate. Towns may fall or be recaptured, but “front lines” move marginally. Insurgents in Syria and Iraq will likely not be able to overthrow the governments in Damascus and Baghdad, but neither will the Syrian nor Iraqi governments be likely to restore their authority throughout their national territories.

National armies in both countries have failed. Power has shifted to militias capable of defending ethnic and sectarian enclaves but limited in their ability to conduct strategic operations beyond their home ground. This shift will, in turn, weaken future central government authority.

Syria and Iraq are now effectively partitioned. These partitions are likely to persist. With U.S. backing, ethnic Kurds have been effective fighters against ISIS and have consolidated their traditional territory in northern Syria and Iraq. Turkey worries that the Kurds are laying the foundation for a future independent state, although no such intention has been announced. Although the Kurds fight forcefully when supported by coalition bombing, they are unlikely to advance into traditional Sunni areas.

The Syrian government has largely abandoned the Sunni areas of the country and is increasingly devoted to defending Damascus and its sectarian bastion in western Syria. Baghdad's Shiite-dominated government has not been able to win over many of Iraq's Sunnis, and that will impede its ability to recapture the cities and towns now held by ISIS.

It remains to be seen whether ISIS, despite the bombing campaign, will be able to consolidate its Islamic State and make it the primary political expression of Sunnis in Syria and Iraq. Alternatively, we could instead see the emergence of a Sunni badlands where warfare between armed rivals continues indefinitely.

Easier to forecast is that the fighting is likely to continue for the foreseeable future. Sectarian and ethnic divisions are now driving the conflicts, making the contest more existential for its participants. Yearnings for peace may be universal, but none of the belligerents appears able to imagine surviving under rule by their foes.

Foreign powers in the region and beyond have significant stakes in the conflicts. This is now complicated by the military intervention of both Turkey and Russia, but absent large-scale direct military investments, which can easily backfire, none of the foreign powers can guarantee the triumph of their local allies or ensure the defeat of their foes. Moreover, the interests of the external powers compete with, rather than complement, each other.

Foreign fighters continue to head for Syria to join jihadist fronts, mainly ISIS, which recruits by advertising the opportunity to build a so-called “authentic” Islamic State and opportunities for unlimited violence. Foreign fighters will continue to pose an additional layer of threat to neighboring states and their countries of origin. The volume of individuals wanting to join ISIS or returning from Syria and Iraq is overwhelming authorities in Europe.

The conflict in Syria has produced millions of refugees on a scale approaching that of Europe during World War II. As long as the fighting continues — which is likely — these refugees will not be able to go home, nor can so many be absorbed by the surrounding countries. They are the new Palestinians and will remain an international burden and a source of regional instability.

Although these stark conclusions hardly sound controversial, they are antithetical to American policy. The very idea of a military stalemate lasting years — or decades — defies America's sense of progress. Secular, democratic governance and religious tolerance are deeply held American values. The United States operates on the presumption that the sectarian and ethnic divisions can be bridged; that Iraq's national army can be rebuilt into an effective fighting force; that the Bashar Assad regime in Syria can be replaced by a more inclusive government; that the Sunnis can be won over and the jihadists can be isolated, contained and defeated; that peace and national unity can be restored, enabling the refugees to return; and that this can be achieved without the commitment of large numbers of combat forces or even with the commitment of American combat forces.

Unquestionably, these are noble aims, and diplomats are required to be optimists. Nonetheless, national objectives must be based upon realistic assessments of the situation. Here, the distance between presumed aspiration and reality seems great.

Brian Michael Jenkins is a senior adviser to the president of the nonprofit, nonpartisan RAND Corporation and author of the recently published “How the Current Conflicts Are Shaping the Future of Syria and Iraq.”

This commentary originally appeared on The Hill on September 28, 2015. Commentary gives RAND researchers a platform to convey insights based on their professional expertise and often on their peer-reviewed research and analysis.