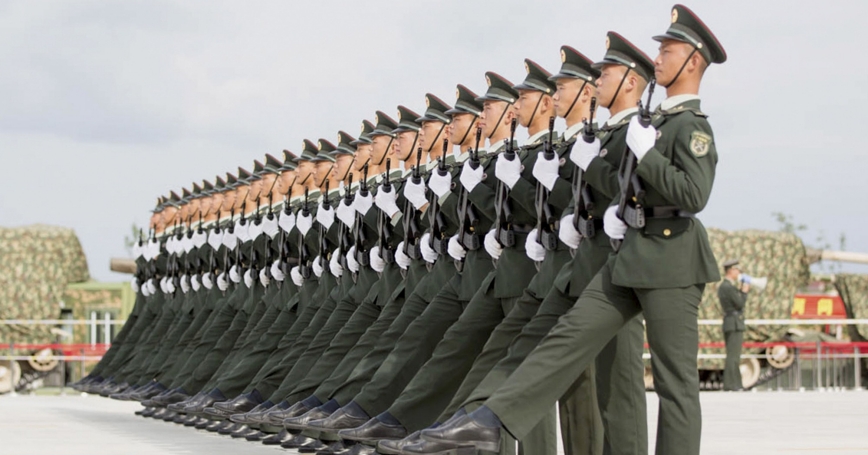 The unprecedented buildup of the People's Liberation Army (PLA) over the past 20 years has pushed Chinese military modernization to the forefront of discussion among U.S. policymakers. We asked RAND senior political scientists Eric Heginbotham and Michael Chase to discuss their recent assessments of Chinese military modernization and its implications for U.S. interests in Asia. Heginbotham is the lead author of U.S.-China Military Scorecards: Forces, Geography, and the Evolving Balance of Power, 1996-2017. Chase is the lead author of China's Incomplete Military Transformation: Assessing the Weaknesses of the People's Liberation Army (PLA).

The United States and China have strong economic and diplomatic ties. Why is there a concern about relative military capabilities?

Heginbotham: The United States and China do indeed cooperate in many areas, and both countries want to build a positive political agenda with one another. The United States has enormous economic and strategic interests in continued stability in Asia, and it has made commitments to friends and allies to help maintain that stability. But we can't take stability for granted. Maintaining a balance of military power and the right military posture are essential ingredients in deterring conflict. To be clear, we don't expect or hope for conflict between the United States and China, but it's important to understand how the balance of power might be shifting.

What's been happening to change the balance of power?

Heginbotham: The short answer is that Chinese economic growth has enabled it to spend more on defense, and the balance of power has shifted accordingly. After the Taiwan Strait Crisis of 1996, China began investing heavily in its defense capabilities. Defense spending has grown about 11 percent per year since then, adjusted for inflation. Much of that modernization has focused on developing air and naval forces, conventionally armed ballistic missiles, and counterspace and cyber capabilities. Recently announced cuts to the number of land forces are very much in keeping with that focus.

Chase: In the 1980s and 1990s, the PLA was saddled with outdated equipment and poorly trained personnel, as well as the distraction and corruption associated with its involvement in an array of commercial activities. China reacted by pouring money into and reforming its military. The PLA has made impressive progress in a relatively short time, and it is clearly becoming an increasingly professional and capable fighting force.

The United States has also invested a lot in its military capabilities. Is there a concern that China could catch up?

Heginbotham: No. System-for-system or at the level of the individual service member, China is not even close to catching up to the United States. But it doesn't need to catch up fully in order to challenge U.S. defense capabilities in Asia, especially in a conflict close to the mainland, such as in Taiwan. And China has been investing in areas that leverage its geographical advantage in the event of a conflict.

Where do you see China making significant gains?

Chase: The PLA is increasingly capable of threatening its neighbors and holding U.S. bases and other high-value assets at risk, should the Chinese Communist Party leadership order it to do so. Chinese capabilities aimed at deterring or, if necessary, countering U.S. military intervention in the Asia-Pacific region—including systems designed to hold U.S. military bases, aircraft carriers, space systems, and computer networks at risk—are becoming an increasingly serious cause for concern among U.S. defense analysts.

Heginbotham: Looking at potential conflict scenarios and trends over time, we see that China has made relative gains in its ability to contest U.S. air superiority, put U.S. bases at risk, and threaten U.S. carriers. All of these improvements would make it harder for the United States to protect its interests close to the Chinese mainland. China's ability to project power to more distant locations is limited, but its reach is growing. If the United States and China remain on current trajectories, the frontier for U.S. dominance in Asia will progressively recede.

Where do you see China lagging behind?

Chase: Our team relied heavily on Chinese publications—such as defense white papers, books on military strategy and campaigns, and PLA media articles—to look at PLA weaknesses from the perspective of the Chinese. We found that the PLA still suffers from several potentially serious weaknesses. The first is institutional: The PLA faces shortcomings stemming from outdated command structures, quality of personnel, and corruption. The second centers on combat capabilities, including logistical weaknesses, insufficient strategic airlift capabilities, limited numbers of special-mission aircraft, and deficiencies in fleet air defense and antisubmarine warfare. These weaknesses increase the risk that the PLA will fail to successfully perform some of the missions Chinese Communist Party leaders may task it to execute, though the potential impact varies by mission.

Heginbotham: Right. Many of the material weaknesses that Mike mentions would have a particularly large impact on the PLA's ability to execute tasks or missions at greater distances from the Chinese mainland, such as around the Spratly Islands. And of course the United States has not been standing still either. The United States maintains a commanding technological lead in undersea warfare. And in long-range air strike, a combination of new generations of U.S. air-launched cruise missiles and new stealth capabilities would enable the United States to hold Chinese targets at risk despite the latter's improving air defense capability.

Do you think China will be able to address areas of weakness?

Chase: The Chinese are keenly aware of these weaknesses and are working hard to correct them. The PLA is already addressing institutional problems such as corruption and training deficiencies. Over the next 10 years, the PLA is likely to concentrate on improving weapon systems and equipment, particularly in high-priority areas such as naval, air, missile, and space capabilities. All these developments are likely to improve the PLA's overall combat capabilities. That's one of the reasons why it's so important for U.S. policymakers to understand the PLA's current shortcomings—they indicate where China is likely to focus its modernization efforts going forward.

Does this mean China and the United States are headed for a conflict?

Heginbotham: Let's be clear: We don't desire or predict a conflict with China. Nor do we think that China would win a war with the United States. But the trends we have been talking about suggest that if there were a conflict, China may be able to gain an initial advantage (such as establishing temporary air and naval superiority), lengthen the contest, and make it more costly for the United States to prevail. In certain regional contingencies, Beijing might believe that these costs might dissuade U.S. intervention in a conflict. In the worst case, this could undermine U.S. deterrence and encourage more adventurous behavior on the part of Beijing.

What should the United States be doing now?

Heginbotham: The key thing is for the United States to take steps that will maintain its ability to defend its regional interests and deter China from using force or coercion to achieve its objectives. The United States will probably not have the resources to restore all-aspects dominance or prevent all further erosion of the balance of military power over the next few years, but it can adjust its operational concepts, force structure, and diplomacy in ways that will slow the process and limit the impact on deterrence. That includes investing in capabilities that offset Chinese advantages close to the mainland, strengthening ties with allies in the region to ensure access, and engaging the Chinese on strategic stability and escalation management issues.

Chase: Yes, our analyses are two sides of the same coin. We set out to look at different aspects of the issue, in order to give a comprehensive picture of where China is today and where it could be heading. Understanding where the PLA falls short of its aspirations, or perhaps has not fully recognized the need for improvement, is just as essential as understanding the PLA's strengths. So, while we asked different questions, looked at different scenarios, and employed different analytical approaches, our findings are consistent and complementary. The bottom line is that China has made enormous gains in a short time, and even though the PLA still has some weaknesses, we expect it will continue to improve in areas where it's currently lagging.