How to Defeat a New Boko Haram in Mali 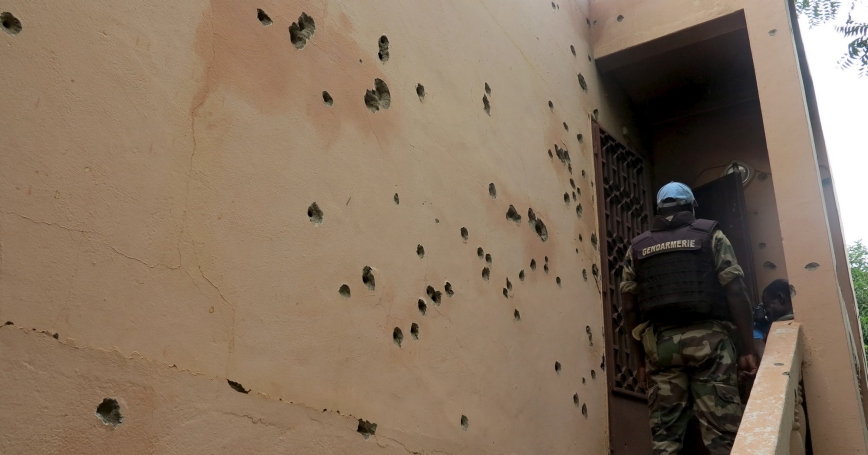 A Malian gendarme climbs stairs at the Byblos hotel, site of a siege over the weekend in which 17 people died in Sevare, Mali, August 11, 2015

This year a new terrorist group in Mali emerged from the shadows and is attracting growing attention. The self-proclaimed Macina Liberation Front (MLF), based in central Mali, has generated headlines with several attacks—most recently the siege in early August of a hotel in Sévaré used by United Nations employees that left at least 13 dead.

There is growing speculation, moreover, that the MLF represents a new Boko Haram, the Islamist insurgent group and Islamic State affiliate that has turned northern Nigeria into a war zone. The comparison has some merit, but in any case it is important to understand what the MLF is rather than rush to conclusions.

Part of the problem posed by the MLF for Western analysts is the paucity of information about it, central Mali, and the Peul ethnic group from which it draws its recruits.

The list of Americans who can speak with any authority on contemporary politics, religion and society in central Mali or more specifically in Mali's Peul community is short. Another problem is the fact that in the Sahel it is hard to determine the extent to which a militant group represents anything more than the ambitions of entrepreneurs who have found in militancy a vehicle for advancement—as opposed to reflecting legitimate grievances or any of the usual “root causes” associated with extremism.

One French expert, for example, noted that Peuls have watched some of their neighbors take up arms to assert their interests for years now and have concluded that it was time to follow their lead. Islamic radicalism clearly is one driver; however, so are economic and political interests. If one can't beat them—them being other ethnic groups who appear to have found profit in taking up arms—join them.

In any case, the MLF (like Boko Haram) represents a dangerous bridge between two powerful religious strands in the context of a society increasingly marked by violent inter-ethnic competition for power and access to resources. Islam among Peuls, as with other Sahelian communities, contains within it a powerful “reformist” or “revivalist” strain that co-exists and sometimes clashes with what can be described as a mystical and humanitarian orthodoxy.

Historically speaking, the most obvious proponent of the former is Sékou Amadou, the preacher who in the early 19th century initiated a jihad and founded the “Empire of Macina” with which the MLF associates itself. The best known example of the other extreme is the 20th century writer Amadou Hampâté Bâ, who labored to preserve and promote what he regarded as the Peuls' distinctly universalist Islam.

The MLF positions itself squarely on the revivalist side of Peul Islam and connects it with imported forms of radical Islam; it seeks to tap the combination of ethnic chauvinism and religious extremism represented by the memory of Macina and updates it with modern Islamism.

In so doing, it reflects the failure of more moderate Islamic authorities and traditions such as those celebrated by Bâ to compete in contemporary Mali's Islamic public sphere. It also reflects the conjuncture of religious radicalism with ethnic radicalism driven by insecurity, competition among ethnic groups, and the general tendency of people under stress to retreat to ethnic or tribal solidarity groups.

The MLF is more than simply a security threat, meaning that more than “security measures” are required to defeat it. So while there is a need for stepped up military and police efforts against it, Mali's policymakers and their international partners need to focus on countering revivalist Islam, ideally by promoting Mali's other Islamic traditions, while finding ways to calm the inter-communal competition.

Neither task is easy, but if no progress is made on either front, no security measures, however effective, are likely to stem the threat represented by the MLF over the long term.

This commentary originally appeared on Newsweek on September 7, 2015. Commentary gives RAND researchers a platform to convey insights based on their professional expertise and often on their peer-reviewed research and analysis.