Lessons from the Past for the Future of the KC-46A 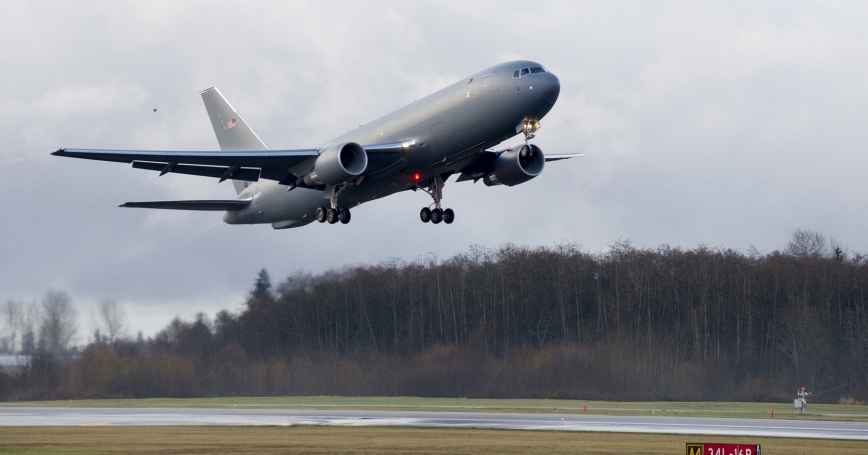 The KC-46A Pegasus aerial refueling aircraft takes off on its maiden flight from Paine Field in Everett, Washington, December 28, 2014

Boeing costs of developing the KC-46A Pegasus aerial refueling aircraft recently have risen by about $800 million to address problems with the integrated fuel system. That comes on top of the approximately $400 million cost of addressing wiring problems reported previously. Boeing is developing the KC-46A under a form of fixed-price contracting; the cost to the Air Force for engineering and manufacturing development for this system is capped at $4.9 billion. So, to date, Boeing has had to absorb approximately $1.2 billion in cost overruns.

Industry experts assert Boeing took a calculated risk in its bid, willing to absorb some level of development cost overruns to win, thus ensuring that it remains relevant within the global market for tanker aircraft. Nonetheless, as the system progresses toward production and sustainment, the Air Force will need to stay the course, continuing to maintain close control over the development contract, and manage future contract negotiations for the KC-46A to ensure that losses during development are not recovered through future contracts.

The use of fixed-price contracts to control cost growth during the development phase of weapon system acquisition has been tried before. A Defense Business Board analysis cites notable examples in the 1960s, as part of Total Package Procurement, including the C-5A, F-14, SRAM missile, Cheyenne Helicopter, LHA ship, and the F-111. Yet significant cost growth occurred within these programs, contributing to severe financial strain on two contractors.

The pendulum swung back toward cost-based contracts in the 1970s. Then in the 1980s, in response to cost growth in these cost-based development contracts, the Department of Defense (DoD) tried fixed-price development contracts again for the A-12, V-22, F-14D, T-45, T-46, C-17, AMRAAM, and DIVAD programs. Significant cost growth occurred again, with another contractor in financial jeopardy. The A-12 program was particularly problematic, resulting in cancellation of the program and decades of litigation.

The prognosis is not hopeful. Looking across a wide range of weapon system acquisition case studies conducted over several decades at RAND, we are unable to find examples of fixed-price contracts successfully reducing costs to the DoD associated with developing complex weapon systems. Sooner or later, through one mechanism or another, the government has ended up paying for much of the cost growth originally absorbed by the contractor, often during the production phase (or the program was cancelled or significantly cut back).

This does not necessarily mean that KC-46A will follow in the footsteps of prior programs, but the historical perspective does highlight the challenge the Air Force faces and suggests ways that it can shape its approach to the KC-46A program moving forward. In particular, experience suggests that the Air Force should pay particular attention to the following.

Hold the Line on System Requirements

To date, the Air Force has successfully prevented changes to KC-46A system requirements, timing and funding to avoid opening the contract to further negotiation that could lead to higher costs to the Air Force. This should continue to be a high priority for Air Force leadership, requiring the buy-in of the Air Force's operational and life cycle management communities and the other Services that depend on USAF tankers. Should new operational requirements become necessary, the Air Force should assess the cost implications of re-opening the contract during the development phase versus upgrading the system through a modification program in the future. If they choose, OSD leadership and Congress could also play a stabilizing role in the near term by deliberately avoiding new guidance that delays the current schedule or changes authorized quantities.

Don't Save Now to Pay Later

The DoD acquisition system naturally emphasizes near-term costs more highly than relatively uncertain future costs. Boeing's recent development losses will increase its incentives to find opportunities for close-in savings. The Air Force will need to evaluate the effects of such development cost reduction initiatives on the costs associated with operating and supporting the system over its multiple decades of service life. Experience has shown that operating and support costs can be substantial, even when one accounts for their timing in the future.

In the past, some programs have seen development losses recouped during production. As the Air Force enters negotiations for future production lots and sustainment activities, it will want to understand the details of mechanisms through which Boeing could potentially seek to recoup development losses later in the KC-46A life cycle. This includes careful analysis of the underlying costs of the system and the opportunities for cost improvement throughout production. While the cost of future production lots is capped, the challenge for the Air Force will be to limit contractor attempts to recoup development losses by driving production costs all the way to the not-to-exceed prices.

Each of these recommendations sounds simple and intuitive, yet they have proven challenging time and time again in execution of large and complex military system acquisition programs. Given the importance of the KC-46A program within its overall investment portfolio, the Air Force cannot afford to waver, and key stakeholders in OSD and Congress could play a critical role in bolstering and enabling the Air Force's efforts to limit cost growth.

Laura H. Baldwin is a senior economist and the associate director of RAND's National Security Research Division, Mark Lorell is a senior political scientist, and Obaid Younossi is a senior management scientist and director of the RAND Project AIR FORCE Resource Management Program.