The Greek Tragedy's Next Act Unfolds 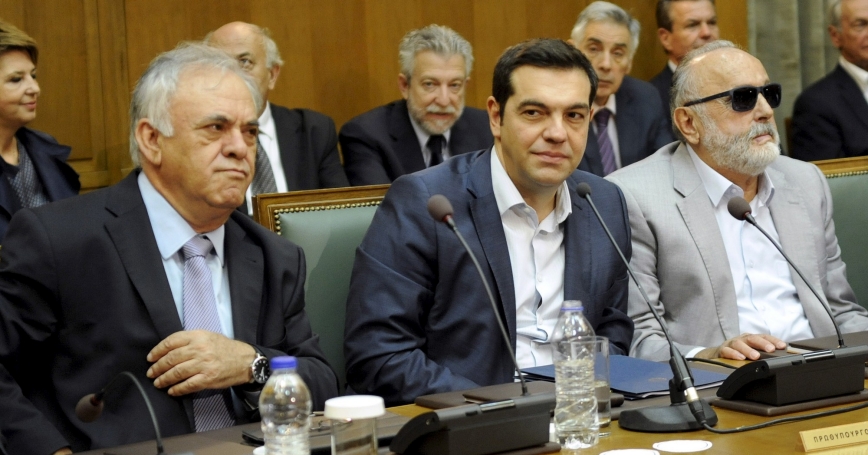 Greek Prime Minister Alexis Tsipras (C) at the first meeting of the new cabinet in the parliament building in Athens, Greece September 25, 2015

For the second time in nine months, Alexis Tsipras and his Syriza party came out on top in a Greek general election. Elected on an anti-austerity platform in January, Tsipras and Syriza won again on Sunday, this time committed to implementing more harsh austerity measures, including raising taxes, cutting pensions and difficult structural reforms.

The election could very well demonstrate that the Greek people—like Tsipras himself—have come to realize that there is no magic solution that can extract Greece from the financial mire it sank into some five years ago. Tsipras seems to have convinced the non-apathetic part of the population that he is the person to lead the nation going forward, and that he is at the leading edge of generational change in Greek politics.

Still, on regaining the mantle of prime minister, Tsipras should expect little, if any, honeymoon from the Greek electorate, as he faces not just the implementation of austerity measures demanded by the International Monetary Fund and the EU: He must also cope with Greece's part of a European migration crisis of historic proportions.

What the country needs now, more than anything, is a period of stability to improve economic and business conditions and get growth going. With his mandate renewed by an unexpectedly large win at the polls on Sunday and the hard left wing of his party gone, Tsipras should now have the political capital to enact the changes needed.

Tsipras said debt relief will be atop his agenda, but EU partners insist on seeing further cuts to expenditures and new revenues first. An immediate priority will be to pass required legislation, and reorganize and recapitalize Greece's crucial commercial banking sector.

While the path ahead is hardly clear, it's easy to see how Greece got into its current depressed state and to draw some lessons from this modern day Greek tragedy. The Greek economy was the least competitive in Europe, but with a sharp reduction in borrowing costs after it joined the euro the Greek state went on a borrowing binge that resulted in a heavy debt load.

What's worse, Greece sold sovereign bonds while fudging its budget statistics. When the truth emerged in 2009, the loss of confidence was sudden and severe.

The first bailout package in 2010 brought very tough new credit terms, but it took the International Monetary Fund (IMF) and the European Union much too long to put it together, aggravating Greek finances in the interim. The effect of austerity on the economy was grossly underestimated, as the IMF later admitted. Severe austerity with little hope of growth in the future fatally undermined political support for reform in Greece.

The net effect of the first package was to bail out the European banks and reduce the systemic risk substantially. There was no haircut for private creditors, because of European concerns about contagion across the euro. That meant that, when a haircut on private creditors was finally imposed in the second package in 2012, some 80 percent of the impact fell on Greek banks, pension funds and other institutions that couldn't sell off their Greek public debt holdings (as other European banks had earlier).

It is also clear in retrospect that the unwillingness of the eurogroup to give the 2012–2014 center-right Greek government much credit for implementation of the second program, or a general sense of “light at the end of the tunnel,” made it possible for Tsipras to sweep to power in January 2015.

Over the course of a tumultuous nine months in power this year, Tsipras came to realize that Greece had no choice but to submit to austerity demands. In backing Tsipras in the latest election, the Greek electorate signaled that it agreed.

It's probably now pretty clear to many that a “Grexit” would have further dire consequences for Greece and for the euro area too. Greece may have been better off never joining the euro, but once in, the impact on the banking system and the economic infrastructure of a forced departure would have been dire.

And while Greece will never be able to “pay back” all its sovereign debt, the real issue is servicing over the longer term, including rolling over bonds as they mature. But even before any new debt relief Tsipras might yet achieve, the post-2012 debt profile is quite “soft.”

Tsipras and the Syriza party resume power with a clear mandate. The challenges are immense and there are no magic solutions. Glimmers of hope may lie in Greece's advantageous debt profile and the potential of new investment if the private sector is convinced that the economy is truly at a turning point.

Tsipras should use his new-found political capital to put government finance on a firm, sustainable footing and enact important structural reforms that could bring Greece stability and new growth.

Charles P. Ries is a former U.S. ambassador to Greece and the current vice president, international at the nonprofit, nonpartisan RAND Corporation.

This commentary originally appeared on Newsweek on September 26, 2015. Commentary gives RAND researchers a platform to convey insights based on their professional expertise and often on their peer-reviewed research and analysis.