The U.S.-China Summit Is More Significant for Xi Jinping Than Obama 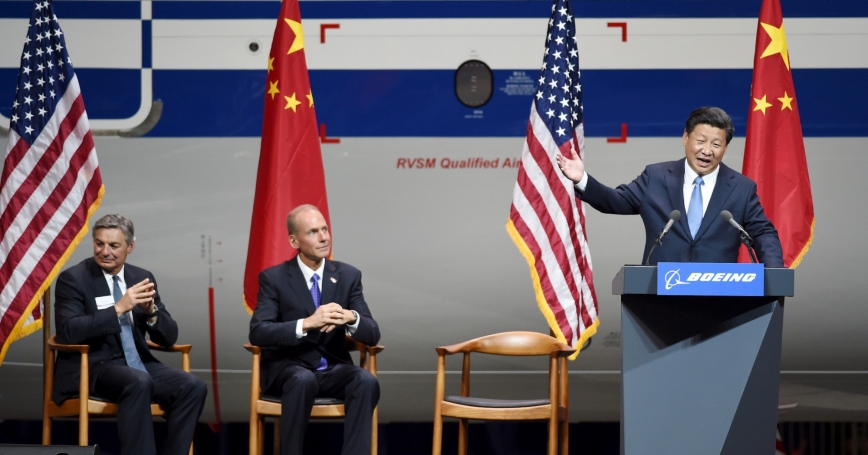 Chinese President Xi Jinping's visit to the United States this week will be a high-profile affair marking this leader's first state visit to Washington since he rose to leadership in early 2013. Although President Barack Obama will host the event, the Xi-Obama summit holds far greater significance to China than it does to the United States.

Certainly the visit is consequential for both countries. It will provide a face-to-face opportunity for the top leaders of the world's leading economy and military superpower and the world's second leading economy and surging military power to discuss a wide range of contentious issues bedeviling relations. Among these are cybersecurity and the South China Sea. Other issues will more clearly underlie mutual benefit, including climate change and economic cooperation.

But the sober mood in the White House combined with an uncompromising message from the Chinese leadership compound of Zhongnanhai do not augur well for making real headway on any issue.

We recently concluded a two-week trip to China, during which we talked with leading think tanks and academics, and found great concern about the summit as well as a growing realization that potential for summit deliverables is slim. Nevertheless, this visit holds a lopsided significance for China's Communist Party leaders.

In China, foreign relations between states are considered to be top-down. Therefore, meetings between high-level leaders are of the utmost importance in setting the tone and agenda of the overall bilateral relationship. Moreover, even at this early stage of his term, Xi has centralized political power and policymaking in one person far more than they were under his two predecessors.

For Xi, the state visit to Washington underscores the tremendous importance of messaging to a Chinese audience the narrative of a continued stable and robust partnership with the country that matters most to China politically and economically. This message is considered critically important because recent economic hiccups and long-term challenges in China have produced worry both inside and outside the country. The volatility of the stock markets in Shanghai and Shenzhen combined with the recent devaluation of the renminbi have shaken investor confidence.

Furthermore, China is at the early stages of a difficult transition from a manufacturing- and investment-led economy to a services-, innovation- and consumption-led economy. The prospect of economic turmoil in China raises the alarming specter of social instability. Therefore, Beijing's leaders are keen to signal that China's economic fundamentals are sound. To do so, they want to underscore that the world's second largest economy enjoys the confidence of the world's largest economy.

The summit is also important for Xi because it demonstrates to the people of China that their head of state is properly respected by his American counterpart. The Chinese leader's reception by the leader of the most powerful country on the planet will serve to affirm Xi's status as a global statesman. The photo ops and video footage beamed back to China will bolster Xi's status by association.

This search for status and respect has parallels with the massive military parade Beijing produced on Sept. 3 — the largest ever to take place in China — to commemorate the defeat of Japan in 1945. The heads-of-state visits, the goose-stepping military formations (each led by a major general), the flyovers by fighter jets and the floats of nuclear missiles were all designed to project a facade of confidence and military muscularity and to display Xi as China's unchallenged commander in chief. But they also suggested a China overcompensating for a sense of vulnerability and a need to underscore status.

While status is a driver, this does not preclude the summit from achieving substance. And achieving substance is important: The U.S.-China relationship has the potential to shape the evolution of the world economy and security environment, for good or ill, over the next several decades.

One particularly thorny issue to watch is cybersecurity. Xi appears to recognize this topic is particularly sensitive to the Obama administration, in part because of the hack of Office of Personnel Management records, widely blamed on China, and is seeking to defuse the situation. He dispatched a key aide — Meng Jianzhu of the Communist Party's Central Political and Legal Affairs Commission — for preliminary discussions in Washington ahead of the summit.

In addition, Xi shrewdly focused on the business opportunity China presents to the information technology sector during a first stop in Seattle. Progress between the two countries on a bilateral investment treaty, now under negotiation, could smooth economic relations, and is certainly possible, although even that may prove difficult.

Andrew Scobell is a senior political scientist and Howard J. Shatz is a senior economist at the non-profit, non-partisan RAND Corporation.

This commentary originally appeared on U.S. News & World Report on September 24, 2015. Commentary gives RAND researchers a platform to convey insights based on their professional expertise and often on their peer-reviewed research and analysis.