A No-Fly Zone Over Syria: Q&A with Karl Mueller 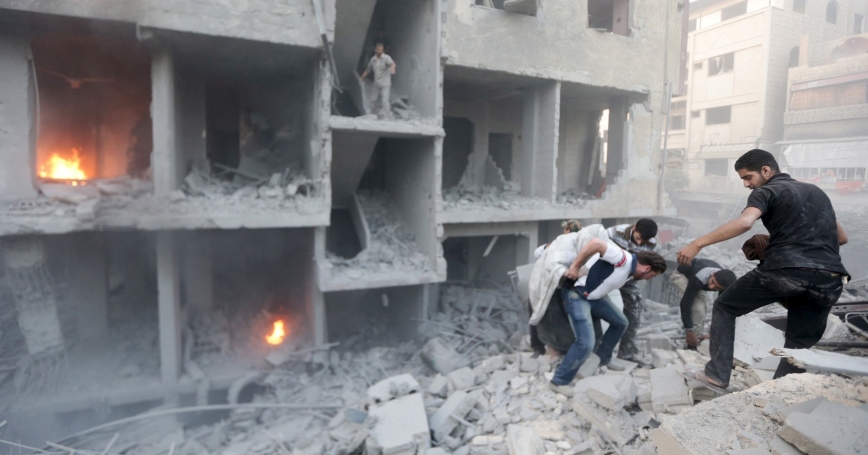 Men search for survivors at a site hit by shelling in Damascus, Syria, June 16, 2015

A number of congressional leaders, former officials, and presidential candidates have advocated the establishment of a no-fly zone or safe zone in Syria to protect Syrian civilians against attack from both the Islamic State and the regime of Syrian President Bashar al-Assad. Under a no-fly zone, unauthorized aircraft are prohibited entry into a specified area, and force or the threat of force is used to deter violations. The creation of a no-fly zone is a key step toward creating a safe zone on the ground, though not the most important one.

RAND's Karl Mueller, a senior political scientist who specializes in research related to military and national security strategy, including the use of air power, answered some key questions about the proposed strategy.

Has establishing a no-fly zone or a safe zone in Syria been seriously considered as a policy option?

To date, the most serious discussion of establishing a safe zone occurred during the U.S.-Turkish negotiations for American use of Incirlik airbase in July 2015. At the time of those discussions, Turkish officials suggested there was agreement on a plan to establish a safe zone in northern Syria. The exact boundaries of the zone were never established, although suggestions focused on a strip east of Aleppo running roughly 60 miles east to west and 30 miles north to south.

But U.S. officials denied there was an agreement on the establishment of such a zone, and even in proposal form, there was no clarity on how such a zone would be enforced. More modestly, the United States acknowledged that it wanted to clear Islamic State forces from this area and was prepared to use air power and its train-and-equip mission to accomplish this. The United States deferred on whether it would use force to prevent Assad regime air attacks on civilians and/or armed actors operating in the zone who are recipients of U.S. training and equipment. In September 2015, CENTCOM Commander Lloyd Austin testified that a ground force would be necessary to implement any “safe zone” and lacking a credible force on the ground to do so, he could not recommend the measure.

Are these policy options still being considered now that Russia has increased its presence in Syria and support to the Assad regime?

In early October, it was reported that Secretary of State John Kerry raised the potential of establishing a no-fly zone at a National Security Council meeting and that he is the administration official most interested in this policy option. However, there has been no public release of a no-fly zone proposal, and the concept appears to lack support from the president and others on his national security team.

What objectives are no-fly zone and safe zone proponents seeking from this measure? Are these objectives achievable?

There are two potential objectives that are often conflated.

First, a safe area for Syrians displaced from their homes by the ongoing civil war could protect civilians from attack while they remain on Syrian soil, and might thereby reduce the flow of refugees from Syria to neighboring states and to Europe. (There are already 4 million Syrian refugees in foreign countries, mainly Turkey, Lebanon, and Jordan, according to the United Nations High Commissioner for Refugees.)

Second, a sanctuary where Syrian rebels could train and from which they could conduct operations against the Assad regime or the Islamic State could strengthen Syrian opposition forces in the conflict.

It is worth noting that United Nations approval for a safe zone is unlikely if it appeared that it could be used as a sanctuary for anti-regime forces due to Russia's power to veto any such resolution in the Security Council.

What constraints complicate establishing a no-fly zone and realizing the expected benefits from it?

The term “no-fly zone” is a misnomer for the proposals currently under discussion since the area would need to be protected against attacks or infiltration on the ground, and from bombardment by artillery, rockets, and missiles, not merely from airstrikes by the Syrian regime (the Islamic State has no air force). The foremost requirement for such a safe zone would be a large commitment of competent ground forces to protect its borders and police the area, supported by air power to provide aerial surveillance and, if needed, close air support for these troops. Second, facilities and services would need to be provided within it for civilians seeking refuge there, which could number in the hundreds of thousands. Protecting the zone from air attack would be a comparatively minor matter. If gaining international support for establishing a safe zone required that it not become a sanctuary for Syrian opposition forces, international forces would also need to be prepared to deny entry to opposition groups seeking a reprieve from regime attacks.

How indispensable is the U.S. military to establishing such a safe area and what would be its necessary role in one?

Proposals such as the one proffered by Dennis Ross, a former Obama adviser and current counselor at the Washington Institute for Near East Policy, envision Turkey and the Gulf States providing the ground forces and paying for the relief and other activities conducted within the safe area, while American and European involvement would focus on providing air cover.

In that sort of a division of labor, the direct involvement of U.S. forces would be relatively limited, although the United States would likely be indispensable in coordinating and managing the operation as a whole as well as the aerial element of it. Sufficient combat air power to support a safe zone could in theory be provided by U.S. allies and partners, but the demands for surveillance and airlift would be extremely hard to satisfy without the U.S. Air Force playing the central part in doing so.

Russia's commitment to Syria also raises the potential for long-range rocket and missile attacks on a safe zone. Countering threats of ballistic missiles fired from inside Syria would require that the zone be protected with anti-tactical ballistic missile (ATBM) systems such as the U.S. Patriot, currently being withdrawn from Turkey. These ATBMs would have to be based within or in close proximity to the zone. Because the United States and its allies lack an effective defense against barrages of shorter-range artillery rockets, such as those from variants of the BM-21 Grad 122mm multiple rocket launcher, responding to these would require attacking the forces launching them into the safe zone, while defending against cruise missiles fired from ships in the Mediterranean or Caspian Sea (as Russia recently demonstrated) would depend on intercepting these from the air.

What countermeasures might Assad's supporters (i.e., Russia, Iran, and Hezbollah) employ in response to a no-fly zone or in anticipation of one?

If a safe zone appeared to imperil the survival of the Assad regime by serving as a sanctuary for opposition forces fighting against it, the United States should expect Moscow or Tehran to take steps to offset that advantage in order to protect their ally. In Russia's case this might include stepping up the intensity of Russian airstrikes against forces fighting against the regime or providing more advanced arms, such as modern surface-to-air missiles (SAMs) and the crews to operate them, to the Syrian Army. Maintaining a no-fly zone over a safe zone within the reach of such advanced weapons would entail substantially greater risks to patrolling aircraft and pilots than would doing so in the face only of Syria's current air defense systems. Deployment of Russian SAMs in the wake of the MH17 shootdown over Ukraine would also pose potential risk to commercial aircraft, some of which are continuing to fly through Syrian airspace.

What are the risks of a no-fly zone in terms of unintended consequences and escalation?

A safe zone occupied by foreign troops and protected by U.S. air power would represent an expansion of external involvement in the Syrian civil war and an escalation of the American role in it, even though the United States has already demonstrated its hostility to the Assad regime by providing arms to Syrian rebels.

Turkey is likely to be the state facing the greatest potential to suffer retaliatory attacks if it were the principal occupier of a safe area in Syria. A single safe zone along the lines of the roughly 1,800-square-mile “Islamic-State-free zone” previously discussed would also be insufficient, in size and location, to absorb the full scope of displacement taking place across Syria. So planners would also need to anticipate that successfully establishing one zone would lead to calls for securing additional safe zones and associated transportation corridors in different parts of the country.