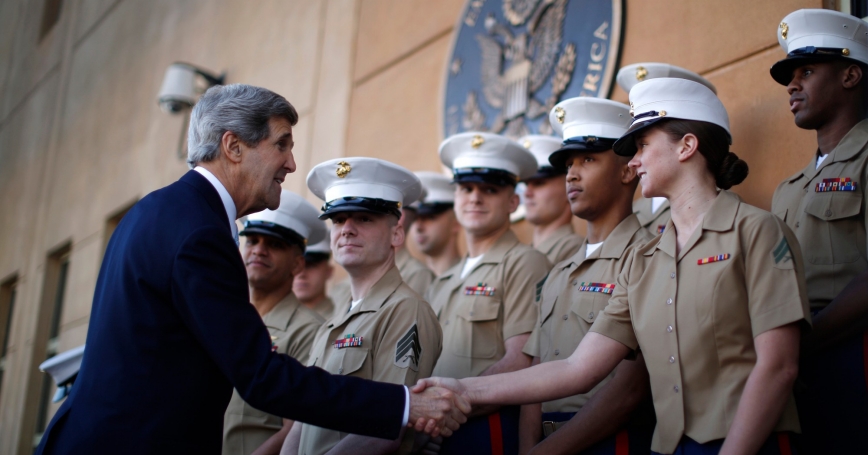 U.S. Secretary of State John Kerry shakes hands with U.S. Marines during his visit to the U.S. Embassy in Baghdad March 24, 2013

Benghazi is in the news again as former Secretary of State and presidential hopeful Hillary Clinton is slated to testify today before the House Select Committee on Benghazi.

In the aftermath of the Sept. 11, 2012 attack, countless questions have been asked regarding the circumstances that resulted in the deaths of four Americans, including U.S. Ambassador J. Christopher Stevens. The State Department, intelligence community, and Department of Defense (DoD) were subject to significant congressional oversight regarding the events of that day and the associated administration response. The oversight has been so extensive that the Pentagon (PDF) sent a letter to lawmakers noting the high costs of the repetitive requests for information from about “50 congressional hearings, briefings, and interviews.” While useful to a certain extent, these public inquiries and debates have missed the mark by failing to ask the real question: How can the United States balance the benefits of an expeditionary diplomatic corps with the risks from the volatile environments in which these personnel will sometimes operate?

Radha Iyengar is a senior economist at the nonprofit, nonpartisan RAND Corporation.

This commentary originally appeared on War on the Rocks on October 22, 2015. Commentary gives RAND researchers a platform to convey insights based on their professional expertise and often on their peer-reviewed research and analysis.