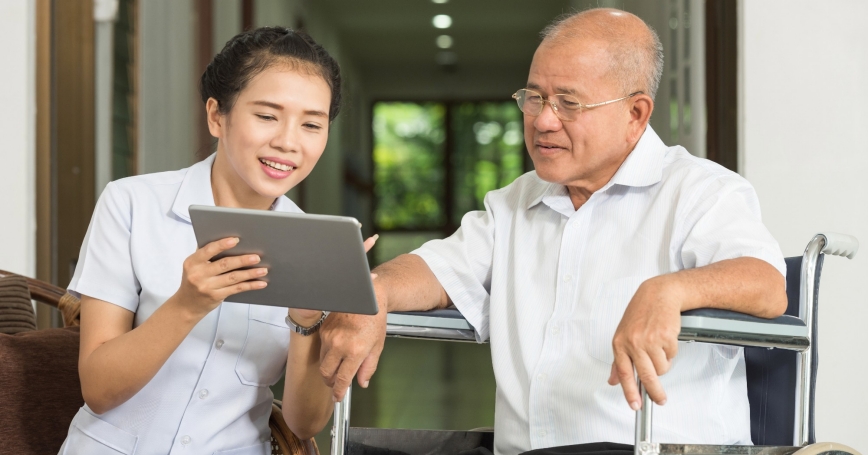 The age make-up of their respective countries may not have been on the minds of negotiators who recently signed the Trans-Pacific Partnership trade deal. But the deal's provisions to promote a global digital economy, by ensuring the free flow of data, have the potential to bridge the global age-divide, if expanded and emulated by the rest of the world.

News reports have spread the word: The world is aging. The population pyramid — the distribution of people by age groups — is going to look less like an Egyptian wonder and more like the Washington Monument in a few decades. Fertility everywhere is dropping, and people are living longer, making the world older. Aging populations can cause fiscal pressures in countries that still have pay-as-you-go public pension systems, and lower labor market participation. At the same time, aging populations require care to stave off illness, loneliness and depression.

However, less is made of how heterogeneously the world is aging. Currently, over 25 percent of Japan's population is over 65. In many countries in Western Europe, the figure is around 20 percent. In contrast, in highly populous India and Bangladesh, only 5 percent are over 65. Japan and Germany have a median age of around 45. In India and Bangladesh, the median age is around 25. Most sub-Saharan African countries have a median age under 20.

While developing countries may start graying as rapidly as the developed ones in a few decades, this is a unique moment in which the world faces a dichotomous challenge. Even as many developed countries are grappling with aging populations, developing countries cannot keep pace with the increasing demands for jobs from their teeming youth populations. The potential bonanza from the demographic dividend in a developing country can turn into a demographic disaster if the youth do not have the right skills and the economy is not strong enough to create jobs.

Trade leads to strong gains for trading parties when their endowments are very different. Would countries with differing population structures similarly benefit from trade?

As technology and communications improve further and become cheaper, one can imagine other services that directly address the more personal components of the age-divide. Could an elderly person in Japan rely on a younger person video-calling from a different corner of the world to chat and provide companionship? This would certainly be as good as or better than relying on robots for companionship, as has been suggested. Perhaps they might even teach each other their languages with some help from technology? As long-term care for the elderly becomes a pressing need in many developed countries, cheaper services such as monitoring and reminding people to take their medications or calling emergency health care staff could be provided remotely from countries with an abundance of younger workers.

The benefits arising from unfettered flow of digital information across nations are obvious. Entrepreneurs, given business-friendly conditions, will offer new services on their own. However, policies adopted by both developed and developing countries can play useful roles too.

Rich countries became worried about job losses and less open to trade after the Great Recession and the failure of the World Trade Organization's Doha round of trade negotiations. However, some occupations, such as science and technology in the United States, are likely to face shortages of workers in the coming decades, as baby boomers retire in ever-increasing numbers. Developed countries can import goods and services that disproportionately employ workers in such occupations. In other words, increased trade openness going well beyond the Trans-Pacific Partnership can be directed preferentially at industries facing labor shortages.

However, not all goods are traded, and addressing labor shortages in certain occupations, such as health care, would require the aging countries to become more open to immigration. That is an issue even more politically contentious than trade, but directing new labor toward those sectors facing serious workforce shortages, and imposing time limits on the stays of visiting workers, could make the solution more palatable. By increasing the number of workers, immigration also reduces the dependency ratio (the ratio of the number of people in the labor force to the number that are not), easing the burden on those who are economically active. While workers of all ages in developing countries may be attracted by these policies, younger workers are more likely to benefit, given their preponderance and mobility.

Developing countries have an urgent need to focus on education and training to increase the skills of their youth so they can participate in the global digital economy. Otherwise, a more open stance adopted by developed countries will be ineffective. Attention needs to be paid not only to formal education, but also to training the large fraction of the labor force that is not yet ready for the global labor markets, including virtual ones. Firms and institutions in developed countries could themselves play a role, if developing countries open up their education and training sectors. Developing countries also need to improve their business environment and decrease barriers to entrepreneurship.

The juxtaposition of aging in some countries and a youth bulge in others presents a unique opportunity for greater global integration. Trade and openness have the greatest potential for creating win-win solutions when the situations of trading partners are disparate. The gaping age-divide presents such an opportunity for creative solutions and policies. The Trans-Pacific Partnership has shown the way.

Krishna B. Kumar is a senior economist at the nonprofit, nonpartisan RAND Corporation, where he directs its Labor and Population research unit and leads the Rosenfeld Program on Asian Development at the Pardee RAND Graduate School.

This commentary originally appeared on U.S. News & World Report on October 7, 2015. Commentary gives RAND researchers a platform to convey insights based on their professional expertise and often on their peer-reviewed research and analysis.