Five Options for the U.S. in Syria 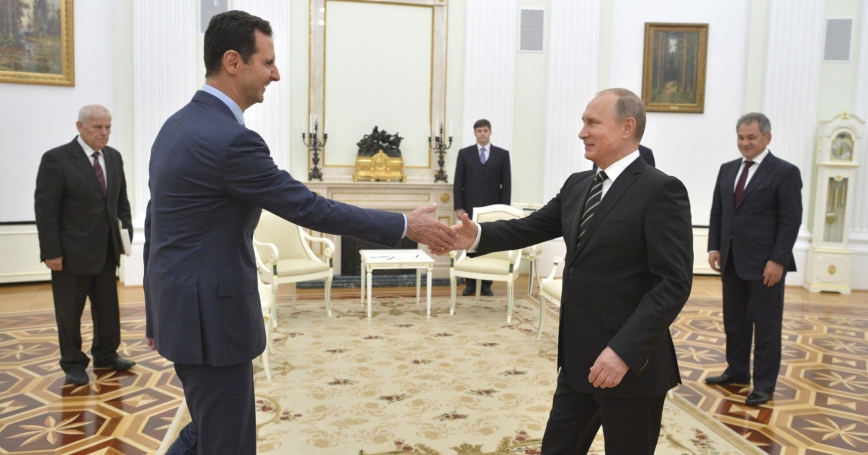 Syrian President al-Assad made a surprise visit to Moscow on October 20, 2015, to thank Russian President Putin for launching air strikes against Islamist militants in Syria

With the debate in Washington about the success or failure of American strategy in Syria and Iraq continuing and presidential campaigns running at full steam, there has been no shortage of competing suggestions about how the United States must respond to Russia's intervention in Syria's civil war. These suggestions range from reducing America's involvement in the ongoing conflict to escalating U.S. military efforts in response to Russian President Vladimir Putin's provocation.

Many of these proposals sound muscular but remain vague. It is not clear, for example, what the pronouncement that the United States “must reestablish its presence” means operationally. Adding details dilutes the tough-sounding talk or raises questions about realism. Countering Putin in the Middle East comes down to advising neighboring countries to prevent Russian overflights or sanctioning Russian defense companies — which the United States has been doing since Russia's intervention in Ukraine. Turning to another suggestion, it is not clear how the United States might build up a “regional army” to destroy the Islamic State in Iraq and Syria (ISIS) and bring down Syrian President Bashar Assad or who in the region would be inclined to join such an army. Thus far, America's efforts to train and equip a limited number of fighters have turned into an expensive embarrassment.

This is not to say that America's current course of action is based upon a realistic assessment of the situation. Right now, Russia may not be impressed by President Obama's offer to work with Putin only when Russia drops its support for Assad. If Russia's military intervention turned into a costly quagmire, as its invasion of Afghanistan did 30 years ago, Moscow could come to see things differently, but that is not the situation now.

Without getting distracted by speculation about Putin's psychology or long-range strategy, it is clear that Russia does not want to see its long-time ally in Damascus collapse. Russia wants to ensure the survival of the Assad regime, its last remaining partner in the Middle East, or at the very least, a pro-Russian successor that will guarantee its continued possession of Russia's only naval base on the Mediterranean.

That means defending Damascus and the Syrian government's remaining enclave in the western part of the country, which, in turn, means going after the adjacent rebel forces. These include both al Qaeda's affiliate, Jabhat al-Nusra, and what remains of the more-secular forces backed by the West. This goal explains the immediate focus of Russia's airstrikes. ISIS is concentrated in eastern Syria and thus a more distant threat, although the presence of a reported contingent of 2,500 Muslims from Chechnya and the Caucasus in the ranks of ISIS has to worry Moscow and provides another motive for why Russia is not content to let the United States and allies deal with Syria's insurgents. Russian participation in ISIS's destruction should not be unwelcome, even though policy and politics require American officials to insist that the United States and Russia are not cooperating.

Russia's intervention in Syria distracts world attention from Ukraine and ordinary Russians from their own economic travails in addition to making the United States look foolish. Some Russians may welcome new military engagements abroad as validation of Russian power, but putting Russian soldiers — even as volunteers — on the ground in Syria runs risks. And although Russia's involvement in Syria is being portrayed domestically as an expression of Deus vult (“God wills it,” the battle cry of the First Crusade in the 11th century), Russia probably would want to avoid the consequences of what could be portrayed as a Russian religious war against all Sunnis.

The United States and its allies have additional objectives, which complicates strategy. For now, ISIS's rapid expansion in 2014, its well-advertised atrocities, and fear of foreign fighters returning home have made its destruction the politically acceptable priority — the coalition is bombing ISIS, not Assad. But ISIS's enemies in the West, along with Turkey, Jordan and the Gulf monarchies, also want Assad out and replaced by a more inclusive government that is capable of drawing in the majority of Sunnis who might otherwise end up in ISIS's camp.

The fact that no suitable replacement for Assad has yet emerged does not lessen Western hostility toward his regime. Western powers definitely want to prevent the Syrian regime, supported by Russia, Iran and Hezbollah, from destroying the anti-Assad forces. Even though these forces include undesirable extremist elements, they keep Assad weak and contained. At the same time, the West does not want Assad's departure to be followed by the kind of chaos that has continued long after Muammar Gaddafi's removal from power in Libya. Nor does it want to see jihadists slaughter Assad's Alawite and Christian supporters — infidels, in the eyes of Sunni fanatics.

Coalitions come with constraints. There is little international support for expanding the coalition's campaign beyond attacking ISIS. Broadening the coalition's mission or escalating the conflict by introducing ground combat forces might reassure some in the region of American resolve, but it could make some participants drop out. The United States could go it alone or with a handful of allies, but doing so also jeopardizes legitimacy and could erode already tenuous domestic support.

Fears of the terrorist threat posed by returning foreign fighters, who now make up a sizable portion of ISIS's ranks, and the difficulties of dealing with the deluge of refugees pouring out of the region, further complicate strategic calculations. The refugee crisis is shaking the European Union to its core.

So what is to be done? Here are five options:

Today's politicians and tomorrow's historians will debate whether, as some allege, America's timidity and inaction allowed the current mess and created the vacuum that Russia has now entered. That does not tell us what America should do now.

There may be other options or preferable variations of these. Since these options are not mutually exclusive, perhaps some combination would make more sense. The purpose of laying them out is to encourage rational thinking based upon realistic presumptions, not media or campaign-driven hype. Right now, the situation in Syria presents a grim picture. Syria must be seen as a long-term problem that will resist any short-term solution, but circumstances will change and opportunities may arise that allow more promising interventions. America can then act wisely in its own national interest.

Brian Michael Jenkins is a senior adviser to the president of the RAND Corporation and the author of the recently released report “How the Current Conflicts Are Shaping the Future of Syria and Iraq.”

This commentary originally appeared on The Hill on October 21, 2015. Commentary gives RAND researchers a platform to convey insights based on their professional expertise and often on their peer-reviewed research and analysis.