How Will China Respond to Future U.S. Freedom of Navigation Operations? 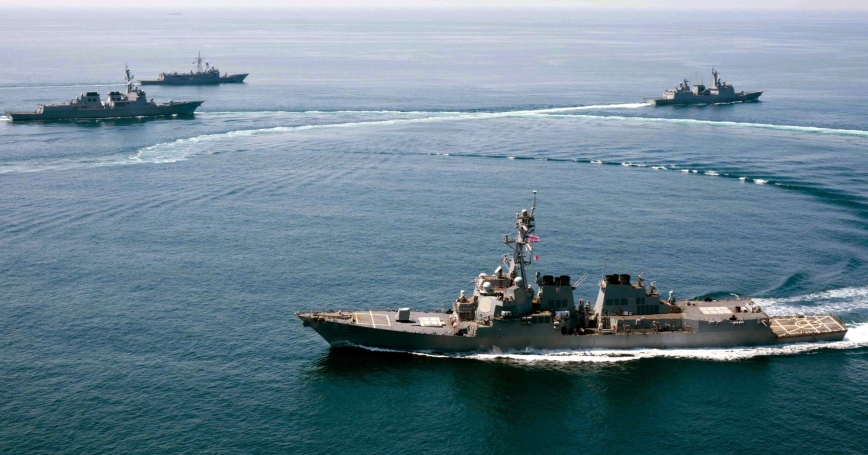 On October 27, the USS Lassen carried out the first freedom of navigation (FON) patrol to challenge China's territorial claims over the 12-nautical-mile region surrounding its artificial islands in the South China Sea. Chinese authorities responded angrily but cautiously, publicly condemning the act and sending two naval ships to trail the Lassen, but stopping short of actions that might interfere with the operation. U.S. authorities have affirmed that future FON operations will follow, while Chinese authorities have pledged to “resolutely respond” to “future provocations.”

The stakes are high for both sides. The U.S. determination to maintain unimpeded military access to the international waters of the South China Sea reflects their importance as an economic and strategic passageway, and for enabling U.S. intervention in any Asian contingency. China's determination reflects its view that control of those waters is necessary to secure its vulnerable southern flank, facilitate exploitation of lucrative fishing and mineral resources, and weaken the ability of the United States to intervene militarily in an Asian contingency. Senior leaders on both sides have weighed in directly on the matter. In a speech to the United Nations, President Barack Obama stated that the United States has “an interest in upholding the basic principles of freedom of navigation and the free flow of commerce.” In an interview published weeks later, President Xi Jinping said, “The Chinese people will not allow anyone to infringe on China's sovereignty and related rights and interests in the South China Sea.” While the first operation passed largely without incident, the stage remains set for future confrontations. How such a situation plays out will depend on numerous factors, one of the most important of which is how China chooses to react.

In assessing China's potential response to follow-on operations, the extremes of either complete inaction or a military attack can be ruled out. Inaction is implausible because statements by senior Chinese leaders have put the country's credibility on the line. Nor will simple public statements of criticism be enough. Inaction on the water could be read as a lack of confidence or fear of U.S. power, which could embolden rival disputants to more aggressively challenge Chinese claims. An inadequate response could also weaken Beijing's efforts to position itself as an alternative security leader for Asia.

However, the downside to military overreaction is even more perilous. Should Chinese forces attack a U.S. naval patrol, it would constitute an act of military aggression. China would certainly insist that its actions constituted self-defense, but the lack of a clear threat posed by a U.S. patrol engaged in an activity most of the world regards as legitimate would have consequences on global opinion. The escalation of tensions between the two countries would prove difficult to control. The two countries would also witness an increased risk of follow-on clashes and possibly even of a destructive regional war.

Between these two implausible extremes lies a range of options that could better serve China's purposes of demonstrating resolve, raising the cost and risk for U.S. operations, deterring rival claimants, and reinforcing China's authority as a security leader for Asia. The options are constrained by available military and non-military maritime assets, however.  For military assets seeking to serve in a non-lethal role, a lack of permanently stationed aircraft on the incomplete runways China is building in the South China Sea limits air operations to occasional reconnaissance sorties from Hainan Island. The most promising asset will continue to be the types of vessels that trailed the USS Lassen. China has traditionally posted a few frigates or destroyers in the Spratly Islands to demonstrate presence and provide overwatch for coast guard operations. In addition to shadowing, China could send one of these vessels to harass a U.S. ship on patrol, as it has done in other waters near the mainland. In December 2013, for example, a People's Liberation Army Navy (PLAN) frigate nearly collided with the cruiser USS Cowpens while attempting to ward off the U.S. ship, which was operating in waters near the Chinese aircraft carrier Liaoning. Harassment by a naval ship carries large risks, however. Attempts to ram or otherwise obstruct a U.S. warship could result in a serious crisis. Should the situation escalate into a clash, the untested Chinese forces could well suffer a humiliating loss at the hands of the U.S. Navy — with potentially destabilizing domestic political consequences for Beijing.

Coast guard ships could serve as less risky assets for more aggressive harassment options. Working in coordination with fishing trawlers, these boats could engage in dangerous maneuvers that raise the risk of a collision. China has a history of relying on such assets for this purpose. In recent years, its coast guard ships have used water cannons and rammed vessels from Vietnam, the Philippines, and other countries. China has used these assets against U.S. vessels as well. In 2009, Chinese fishing trawlers harassed the USNS Impeccable, while PLAN and maritime law enforcement ships watched nearby. Beijing could use any resultant crisis involving coast guard vessels or fishing trawlers to emphasize the risks and costs of the operations to U.S. decisionmakers. Unlike the dangerous harassment scenarios involving PLAN ships, a crisis involving Chinese coast guard or trawlers would pose far fewer risks. Their involvement would also reinforce the Chinese efforts to depict a confrontation as one of a law enforcement nature.

China thus has a graduated range of responses available for future U.S. operations. For the near term, the exact option selected will depend largely on the message Beijing seeks to send regarding the state of bilateral relations. When China seeks to stabilize ties and avoid further deterioration, as is the case today, more restrained options are likely. However, at times when Beijing feels frustrated or senses opportunities to test U.S. resolve, it may find riskier options more appealing. Over the medium to long term, the situation will grow even more complicated for the United States. China will eventually complete the construction of military facilities in the Spratlys, enabling it to station a larger and more diverse array of coast guard vessels, as well as a small number of naval combatants, missiles, and combat aircraft in the area. As China expands its economic investments in Southeast Asia, it will have an added incentive to seek control of the South China Sea. Managing the risks of crisis and conflict will likely grow even more challenging, complex, and important in coming years.

Timothy R. Heath is a senior international defense research analyst at the nonprofit, nonpartisan RAND Corporation. He is the author of the book, China's New Governing Party Paradigm: Political Renewal and the Pursuit of National Rejuvenation (Ashgate, 2014).

This commentary originally appeared on Asia Maritime Transparency Initiative, CSIS on October 29, 2015. Commentary gives RAND researchers a platform to convey insights based on their professional expertise and often on their peer-reviewed research and analysis.