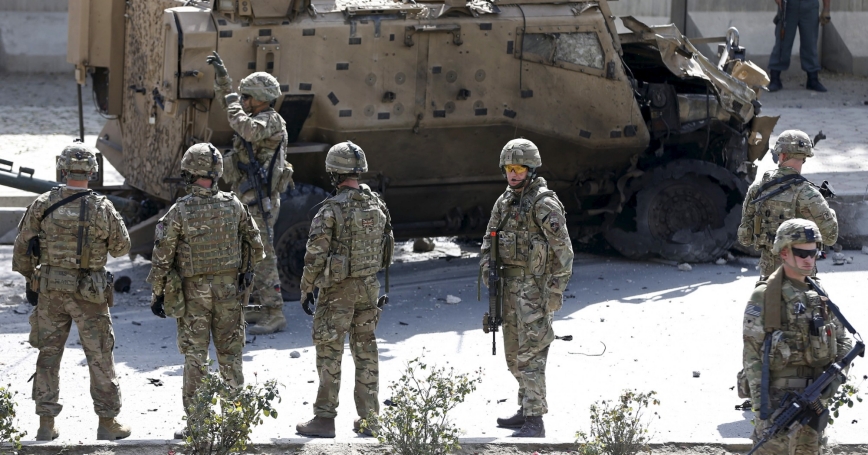 NATO soldiers near a damaged NATO military vehicle at the site of a suicide car bomb blast in Kabul, Afghanistan, October 11, 2015

President Barack Obama's decision to leave some 5,500 U.S. troops in Afghanistan—beyond the end of his second term—is hardly surprising given recent advances by the Taliban, especially the assault on Kunduz. The president's decision can be framed first as a pragmatic and conservative hedge to a fragile and uncertain environment, reflecting ominous (and misplaced) lessons from the 2011 Iraq withdrawal. Second, and more broadly, the decision reflects an ongoing shift to a “partnership” approach of securing U.S. interests abroad with the help of foreign governments, which the president has pursued as a more sustainable model.

But unless this decision is accompanied by other steps, it is illogical to believe that a few thousand more U.S. troops will significantly alter Afghanistan's chances of standing against the Taliban challenge. Until there is a viable political strategy for Afghanistan, any modicum of U.S. troops is, at best, playing not to lose.

Doing better than that will require promoting three dimensions of political change in Afghanistan and between Kabul and Islamabad. Specifically, the White House needs to leverage its renewed engagement—the new troop commitment—by explicitly demanding that Afghan President Ashraf Ghani and his government emphasize unity and better governance and overcome petty squabbles of internal power sharing. At this stage, their very survival depends on it. In addition, the United States can use its new commitment to try, once again, to bring the Taliban to the table—not just by targeting militant leadership, but further by making the U.S. troop presence, and its targeting methodology, available for discussion within a political process.

Finally, and just as important, Pakistan Prime Minister Nawaz Sharif's upcoming visit to Washington gives the White House an opportunity to accomplish more effectively what it has struggled to do until now. The president should use Sharif's visit to force Pakistan to think twice about its assumption that the United States will eventually abandon Afghanistan, and to put real pressure on Pakistan to reduce their proxy support of the Taliban.

The decision to keep troops beyond his time in office was the president's seventh, and potentially last, policy decision on Afghanistan. These perennial strategic “review” processes have typically been almost entirely about specific U.S. troop levels. The most significant of these seven reviews was the second, precipitated by the late 2009 leak of General Stanley McChrystal's stark “assessment” of the situation in Afghanistan as “serious and deteriorating.” That culminated in a “surge” of approximately 30,000 U.S. troops and a downgrading of the objective against the Taliban from “defeat” to “degrade.” The late-2009 review also stepped back from appearances of “nation-building” to emphasize instead a “transition” strategy of putting the Afghans in the lead, while retaining the original 2001 objective of seeking the “defeat” of al-Qaeda. Every review since 2009 has left those strategic objectives intact and instead tweaked troop level milestones, given that the military's 2010 projection of completing the transition process in 2014 increasingly appeared optimistic as each year passed.

This most recent decision entailed the smallest troop adjustment to date, and yet this is a different kind of tweak. Whereas previous decisions adjusted the pace of withdrawing U.S. troops by the end of the president's second term, this recent decision shelves that fundamental aspiration. The president is no longer specifying a timeline for withdrawal. Rather, the latest decision redefines his new end-state: instead of 1,000 troops co-located with the Embassy in Kabul, there now will be 5,500 troops spread between Kabul and three outlying and enduring bases.

Obama is thus handing his successor flexibility rather than closure. This is not merely political; it could also be leveraged toward a more effective strategy. This latest decision can be used to send a simultaneous message of U.S. endurance and commitment to Kabul, Islamabad and the Taliban. In terms of operational effect, it also enables the retention of two additional capabilities that would have been phased out next year: a modest counterterrorism platform and institutional advisors to mentor the Afghan security apparatus. In its simplest form, the shift provides enough troops to retain three outlying bases, which provide the next president counterterrorism platforms and some dividend on America's still-expensive strategic partnership with Afghanistan.

Though 5,500 troops may be a 500 percent increase over the previous plan, it will not, of its own weight, change the trajectory of Afghanistan. Despite the unprecedented build up of Afghan police and army infrastructure, most reporting suggests that: 1) the security situation is sliding slowly in favor of the Taliban, 2) the Taliban is facing encroachment by Islamic State factions, and 3) the government's weak grip on Afghanistan is giving way to a gradual devolution toward warlordism. The U.S. counterterrorism capability of a few thousand troops staged at outlying bases may be adequate to address transnational threats to U.S. interests that might otherwise emerge from Afghanistan, but it can't be expected to make a strategic dent in the trajectory of the now intensifying conflict inside Afghanistan.

As misplaced as comparisons are, Iraq and Afghanistan do share an important characteristic: Their conflicts are politically driven and can only be solved by political means.

Hence, a ratcheting up of the political strategy is now critical. As misplaced as comparisons to Iraq are, the two countries do share an important common characteristic: Their conflicts are politically driven and can only be solved by political means. This is why the continuing focus on troop numbers—and reliance on the efficacy of U.S. military power—has disappointed. The military can only support, as a secondary and indirect effort, a strategy that places— almost as a prerequisite—political will and governance infrastructure at its core.

So the real potential in this shift is psychological—a signal to the region that neither the costs nor American fatigue with its presence are so great that the United States is prepared to wash its hands fully. In this light, it very much matters how Pakistan and the Taliban leadership respond to this decision. But what matters most is how the Afghan government, and particularly Ghani, proceeds from this point forward.

On this front, Afghanistan is hardly an isolated case. Without a focus on the politics of the situation, U.S. training and equipping of foreign armies or militias is ineffective, as seen most dramatically in the failure of the Pentagon's program in Syria. Unfortunately, this political element is much harder to influence, particularly for a nation reluctant to get mired in “nation-building.”

So it is that the United States has proceeded from one year to the next, from review to review, repeatedly considering rationale for extensions that the Afghanistan strategy needed a little more resourcing and a little more time, often with a half-promise that further extensions would not be required. Those who participated in back-to-back reviews, most notably the president, often probed this poor track record of strategic forecasting. Typically, the response was that conditions had changed and the strategy simply needed more time, not that the strategy wasn't working.

Pakistan was always a known obstacle and risk to the Afghanistan strategy, but the real stumbling block has always been, as with elsewhere, that the political side of the strategy struggled to materialize. So the troops became a means to buy the necessary time and space for a political strategy to take hold. There is a fine line between a failing strategy and a strategy that simply needs more time. But at some point, and without a political strategy, it became clear that the United States was playing not to lose.

One of the many lessons of these Afghanistan reviews is that it would be naïve to expect 5,500 troops to salvage a sagging strategy. As the president said in announcing his decision, this reflects a shift away from costly, industrial-scale U.S. troop interventions toward a more “sustainable” approach based on partnerships. And yet recent U.S. experience has been that these partnerships offer little more than an operational platform if the partners' political will does not align with the military side of the partnership. And that means that aggressive implementation of a viable political strategy for Afghanistan remains the lynchpin.

A second lesson is that the United States should not demand precision, and certainly not optimism, in assessing timelines or conditions. Foreign policy is an exercise in uncertainty, and a wise approach prepares for a range of potential futures, rather than faith in a single approach and a particular future. If nothing else, the U.S. experience in Afghanistan has exposed the historical debate over “time-based” vs. “conditions-based” strategies to be a false choice.

Third, and relatedly, this decision to sustain troops is less about what the United States expects of its forces and more about its expectations in projecting against an uncertain future. Americans, and particularly America's military, are conditioned to play to win. Hedging against uncertainty, or playing not to lose, may feel un-American, but it has become the pragmatic alternative to the failed hubris of a world shaped by U.S. conditions, or its timelines.

With more evolved strategies that bring political and governance factors more prominently into play, the United States might play to win once again.

Jeff Eggers is an adjunct senior analyst with the nonprofit, nonpartisan RAND Corporation, a senior fellow at New America, and a former Special Assistant to the President for National Security Affairs.

This commentary originally appeared on Politico on October 16, 2015. Commentary gives RAND researchers a platform to convey insights based on their professional expertise and often on their peer-reviewed research and analysis.