Bosnia Was Hard, Syria Is Harder 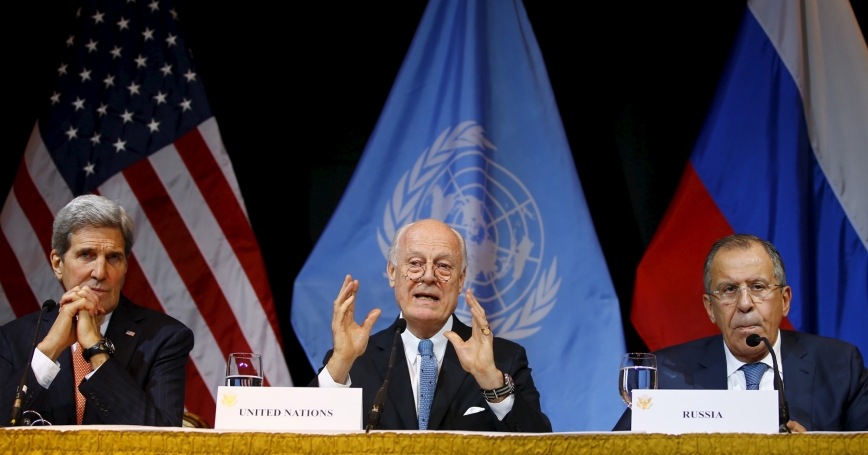 This past weekend in Vienna, a second international conference in as many weeks sought to advance a dialogue on ending the war in Syria. But finding a durable political solution will be a daunting task, perhaps out of reach. Two decades ago, America, Europe, and Russia shepherded an end to war in Bosnia-Herzegovina. The experience may offer lessons for Syrian peacemakers.

Russian cooperation with the West was a key component of the effort to bring peace to Bosnia; it will be critical to stopping the fighting in Syria. The West should not let its objections to Moscow's misbehavior on Ukraine, cybersecurity, and other issues get in the way of collaborating to end the destructive Syrian conflict and associated humanitarian tragedy.

As Yugoslavia broke up in the early 1990s, war consumed the Republic of Bosnia and Herzegovina, and within it the self-proclaimed Bosnian Serb and Bosnian Croat entities. In 1995, pressure from Croatian forces and a NATO bombing campaign crushed Serbian war aims. In U.S.-led talks at Dayton, Ohio, the great powers (France, Germany, Russia, the U.K., and the U.S.) helped bring about a peace deal.

How do Bosnian and Syrian circumstances differ?

In Bosnia, some 100,000 people were killed in the war, and over 2 million were displaced. The Syrian war, which broke out in 2011 amid Arab Spring unrest, is far more destructive. Over 300,000 Syrians have died, over 7 million are internally displaced, and over 5 million have fled the country. This year, over 700,000 Syrians have escaped to Europe. Frustrated Europeans hope for a peace that will stem the refugee inflow.

Compared with most past internal conflicts for which settlements were achieved — such as Bosnia, El Salvador, Namibia, Mozambique — there are more outside powers with differing interests in Syria and more warring parties, including the Islamic State, which has emerged as a fierce combatant. This limits the bargaining space. Prior to a settlement, warring sides usually need to fear stalemate. This is not yet the case in Syria.

Prior to a settlement, warring sides usually need to fear stalemate. This is not yet the case in Syria.

In 1995 in Bosnia, the Croats and Serbs sought an end to the conflict. The Serbs were eager for crippling sanctions to be lifted. In Syria, a number of outside powers are seeking a military outcome. Fighters from Iran, Iraq, and Hezbollah bolster the Syrian army, which also draws on Russian air support. Qatar, Saudi Arabia, and Turkey arm anti-Assad insurgents, including al-Nusra. The West backs the Free Syrian Army.

In Syria, vacillating great powers have so far hesitated to use substantial force. In Bosnia, NATO combat aircraft flew over 3,500 sorties. In Syria, some 30 Russian aircraft are striking opposition targets. The 60-plus-nation coalition has bombed the Islamic State, but not seriously damaged it. Jabhat al-Nusra, an al-Qaeda affiliate, has increased control of territory in Idlib and other areas. Unless the Islamic State is defeated, however, a political solution in Syria will be out of reach.

In Bosnia, Bosnian and Serb forces attacked the half-dozen United Nations safe zones designed to protect vulnerable persons. In 1995 in Srebrenica, outgunned Dutch UN peacekeepers were helpless to prevent the massacre of 8,000 Muslim Bosniaks. In Syria, the great powers have shied away from creating safe zones. If today in Syria the great powers are unwilling to establish a single safe zone, would they offer thousands of troops to implement a peace accord?

Implementing a peace deal requires resources. For the Bosnia accord in its first year, NATO had to deploy 60,000 troops. Syria's population might be five or so times larger than was Bosnia's, and the land area is over three times larger.

In sum, the virulence and complexity of the Syrian conflict, regional power rivalries, and great power reticence bode ill for peacemaking. On November 12, U.S. Secretary of State John Kerry plaintively acknowledged that at times in international affairs “elements required for progress simply do not exist,” although “time and turbulence can create new opportunities.”

To find peace in Syria, substantial cooperation among the outside powers will be an essential first step. This will be challenging but perhaps not impossible. In reaching the Iran nuclear deal, Russia, China, and the West cooperated and overcame high odds. In Syrian peacemaking, they should build on this momentum. Before going forward, however, the great powers ought to soberly assess prospects for an enduring peace accord and the resources required. They should look before leaping and taking others with them.

William Courtney is an adjunct senior fellow at the nonprofit, nonpartisan RAND Corporation, and a former U.S. ambassador to Kazakhstan and Georgia and special assistant to President Clinton for Russia, Ukraine and Eurasia.

This commentary originally appeared on Foreign Policy Concepts on November 13, 2015. Commentary gives RAND researchers a platform to convey insights based on their professional expertise and often on their peer-reviewed research and analysis.