Brussels Locked-Down Heartbeat: A View from Within 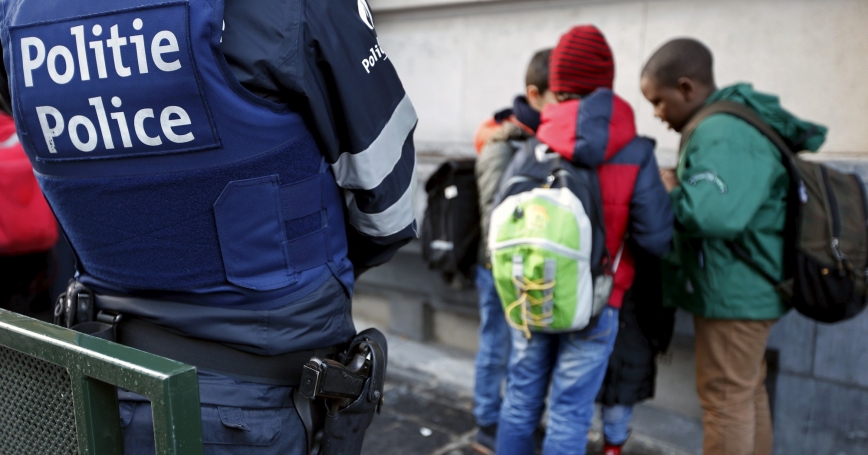 A Belgian police officer stands guard outside a school in central Brussels, November 25, 2015

Over the past weekend, the terror threat level here in Brussels was raised to four, the highest level the Belgian capital has ever had to face. Brussels and its region decided to call for the state of emergency after intelligence services pointed towards a “serious and imminent” threat to the capital and the possibility of a “Paris-style” attack in the greater region of Brussels.

Following the wave of terrorist attacks in the French capital on November 13, which left 130 dead and more than 350 wounded, the two neighbouring countries remain committed to the search for at least two of the conspirators who are linked to the deadliest attacks on French soil since 1945 and who are partly still on the run.

Since the Paris attacks on November 13, Belgian police forces have arrested 21 suspects and have raided several apartments. In particular, the Brussels district of Molenbeek has come under intense scrutiny as more and more evidence has emerged linking the attackers to this neighbourhood.

Molenbeek is part of the Brussels region and home to an estimated 95,000 inhabitants from various ethnic backgrounds, not unlike any other multicultural neighbourhood of any other Western European city. The neighbourhood became notorious due to its links to other, earlier attacks. Yet since last year, the northwestern area of Brussels had been too often in the news.

Molenbeek's sad record started when links were established with an Islamist Moroccan group who claimed responsibility for the 2004 Madrid attacks. The gunman in the Brussels Jewish Museum in May 2014 also spent time in the streets of the district. The attacks on Charlie Hebdo, a French satirical magazine, in January 2015 were also linked to Molenbeek as one of the attackers, Amedy Coulibaly, allegedly purchased the weaponry for the attack from a Molenbeek arms dealer. Furthermore, two suspects killed by Belgian police in a shootout during a terror raid in Verviers in late January were also originally from Molenbeek. Only months before the Paris attacks, the district made headlines yet again when Ayouub El Khazzani, a Moroccan national living in Molenbeek, boarded a train from Brussels to Paris to carry out a mass shooting. In a dramatic episode, Khazzani was stopped by several passengers before he was able to execute his plan. In short, one can link Molenbeek to most of the attacks on European soil in the past 18 months.

The increasing evidence of links between Molenbeek and terrorist activities led Belgian Prime Minister Charles Michel to note that “almost every time [a terrorist attack happens in Europe] there is a link to Molenbeek. It has been a form of laissez-faire and laxity. Now we are paying the bill.” Belgian Interior Minister Jan Jambon also highlighted that, out of the 130 combatants trained in Syria and returning to Belgium, 85 now reside in Molenbeek. How did Molenbeek become not only a breeding ground, but also a safe haven for extremists?

A Closer Look at the Macro Picture

To understand Molenbeek, it is necessary to look more closely at the broader political and cultural context of a country that is often described in the media as a “failed state.”

With its differing and conflicting national heritage (around 60 percent of the population identifies as Flemish, 31 percent as Walloon, while the remainder reflects other minorities), Belgium is layered with several levels and units of administration, often with parallel functions. As a result, the country needs to cater to a public that speaks several languages (between the Dutch-speaking Flanders, the French-speaking Wallonia, and a small German-speaking community in the east of the country), resulting in a lack of a central administration. The Brussels region alone is home to 19 mayors and municipalities in a capital for 1.2 million inhabitants. The six different police authorities must answer to 19 municipalities, often through an outdated system that makes efficient communication and coordination almost impossible. Each of the local municipalities is responsible for the handling of local government level duties, such as law enforcement, but there is no centralized agency to put the puzzle together.

Such an environment creates a vacuum that is all too easily exploited by radicals and extremists.

Failures in achieving socioeconomic progress and the lack of integration have created a fertile breeding ground and safe haven for extremists to flourish in the Brussels region. Many radicals from Belgium come from rough neighbourhoods with high unemployment rates and face social exclusion. Molenbeek is at the peak of the problem with unemployment rates among young men around 29 percent.

In an already deeply fragmented country, there is little space left for outsiders to integrate. As Belgium remains an inherently divided country, its communities will keep living side by side rather than becoming part of a greater picture.

Looking at the European Dimension of Radicalisation

Belgium's small Intelligence Agency lacks the capacities of its neighboring countries' intelligence resources. Indeed, two of the Paris attackers, Brahim Abdeslam and his younger brother, Salah, were known to the authorities and were expected to eventually leave for Syria. Consequently, the brothers had even been interrogated months before the Paris attacks. But the Belgian authorities failed to monitor their Internet activity, as well as the travels of several youngsters leaving for Syria. Since the Paris attacks, the Belgian government has added an additional €400 million for the fight against terrorism. The increase will specifically flow into law enforcement capabilities to screen, monitor, and identify mosques and preachers inciting hatred and terrorism on Belgian territory. The Belgian Crisis Center has also started to implement a dynamic register to keep records of foreign fighters. The register will help improve the flow of information between the relevant security authorities. The Belgium government finally also unblocked additional budget for its Intelligence Agency, unfortunately only after a plot to attack Belgian police officers during a raid in the western town of Verviers was prevented, just days after the Charlie Hebdo attacks in Paris. Yet for all this effort, Brussels is still too far from getting its act together.

As much as extremists work globally and across borders, the same should be true when it comes to those who fight against extremism. National policies will be prone to failure in a European Union without borders and with free movement for goods and people. Police and intelligence services will need to share information and cooperate on different grounds in the future. In that regard, Belgian Foreign Minister Didier Reynders confirmed that only a wider exchange of intelligence data with neighbouring countries will help Europe detect people with a high level of radicalization.

On that note, it becomes clear that instead of worrying only about the situation and the potential influx of radicals from abroad, Europe needs to start looking far more closely into its problem of homegrown radicalization and extremism and must prepare to tackle the situation on its own soil.

In the meantime, Brussels remains under tight security measures. The Belgium government has lowered the threat level from four to three on Thursday evening, indicating that the threat remains serious but no longer imminent. Schools and the metro have started to open, slowly trying to bring the city back to a functioning state. Meanwhile, Brussels citizens are wondering what factors are behind the change in the threat level.

Brussels' heartbeat remains unhealthily high, although it is continuing to beat. After all, such a chaotic situation, c'est très belge.

Ines von Behr is a senior defence and security analyst and Sonja Thebes is a research assistant at RAND Europe, Brussels office.